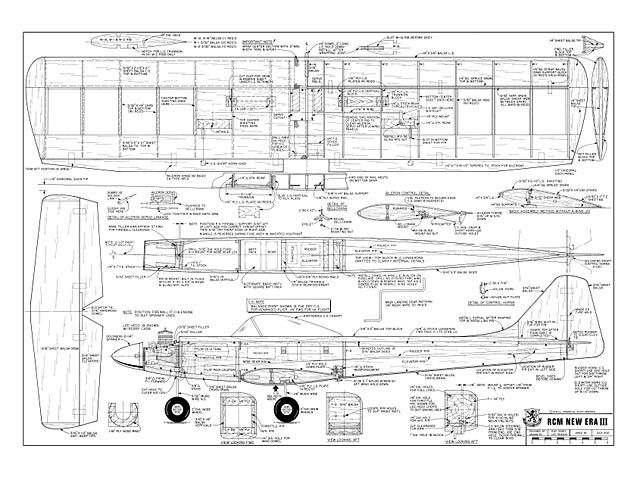 Note the New Era III appeared in RCM magazine, and was also later kitted by Airtronics.

Quote: "Several years ago, Chuck Cunningham and I developed a low wing, .15 powered aircraft which was designed to utilize the then new miniaturized radio equipment. Up until the introduction of the New Era I (oz8042), small aircraft of this size had either exhibited squirrely flying characteristics, or too heavy a wing loading due to the heavier radio equipment we had used until the introduction of this smaller R/C system. Since that little ship eliminated both of these problems, and flew mom like its larger cousins, we dubbed it the New Era I since it ushered in a new dimension in small plane performance. In the ensuing months and years, the New Era I became one of the top five most popular designs ever presented by WC Modeler Magazine - even today it ranks in the top ten in plan sales month after month.

A year or two after the introduction of the New Era I, we incorporated the same design characteristics into a larger aircraft which was called the New Era II (oz9439). This was powered by a .40 engine and, while of a larger physical size, exhibited all of the same flying characteristics of the smaller version. It grooved well, had an exceptionally slow landing speed, and performed most of the maneuvers with ease. All and all, both aircraft were excellent machines both from an ease of construction standpoint, their inherent ruggedness, and their overall performance as general sport aircraft.

However, during the past two years, we have been experimenting with the original design of the New Era I, changing airfoil sections, nose and tail moments, control surface areas, control surface throws, power loadings, wing loadings, and the like, attempting to come up with a vastly improved version of the original New Era I which would compete virtually in all respects with the .60 pattern ships. All prototypes utilized the .19 to .25 displacement engine for the economy both in engine size and fuel consumption. In addition, this size aircraft is far easier to transport and has the added plus of being able to be flown in a somewhat smaller area than the screaming .60 fuel guzzlers. Two engines were chosen around which this aircraft would be designed - the extremely powerful Veco-Lee .19 engine with Perry carburetor and the extremely quiet Veco muffler, and the equally powerful OS Max .25 engine and muffler. Both of these little powerplants have an extremely high power output with exceptional idling characteristics. The OS Max .25 and its muffler are available in virtually all hobby shops. The Veco-Lee .19 is available for 557.00 from Clarence Lee, 7215 Foothill Blvd., Tujunga, California 91042.

During the design stages of the New Era Ill, several people were involved. I began by noting the characteristics of the New Era I which we wished to retain in the new design, while Bill O'Brien added a list of changes which he felt would improve the overall flying characteristics. As the design progressed to the first flying prototypes, Carl Mass, an extremely proficient flier, tested the prototyes and made several changes to the evolving design.

The finalized design of the New Era III was achieved after two years of experimentation and test flying. As you can see from the fuselage outline, the nose and tail moments have been lengthened over the original New Era I, the airfoil has been changed and, for those of you who would care to check it out, this is the same airfoil used on the Acro-Star biplane (oz6256). It not only greatly improved the flying capabilities of the New Era III, but the slow landing characteristics were still retained. You will also notice that the ailerons are slightly thicker than the trailing edge of the wing which, if you'll go back a few issues in RCM, will explain to you why the aileron efficiency of the New Era III is so great and will also explain its rapid, but precise, roll rate.

You will find that the wing construction has been completely changed from the original New Era I which has increased its rigidity by utilizing shear webs to lock the D-tube construction and add fantastic torsional stiffness. The fuselage is quite simple and utilizes no doublers but a more rounded top deck for overall appearance. The nose is roomy and the engine can be mounted upright for convenience with a sidewinder mount optional for overall appearance if you prefer.

With regards to the final prototypes, and their flight performance. I can only say that we have never, in all the ships we have tested and flown, found a ship of comparable sizec and power that could equal the New Era III. Carl Maas, during the final test tlights stated quite simply that it could equal almost any .60 powered competition stunt aircraft that he had seen or flown. In fact, the local fliers watching Carl put the New Era III through its paces, were waiting in line to take their turn at the stick. Each of them agreed that this .19 to .25 powered ship was the equivalent to their .60 powered pattern aircraft, and each of them asked for a set of the plans.

If you decide to build the New Era III, and we hope you will for it will truly amaze you with its spectacular performance. I hope you will keep in mind that this is definitely not a beginners aircraft. Although capable of sustained low speed flight, it is an extremely fast ship requiring the reflexes of a trained R/C pilot..."

Update 14/01/2016: Replaced this plan with a better copy scanned from a fullsize plan, thanks to Balsaworkbench, scanning by Don at EAC, cleanup by theshadow. 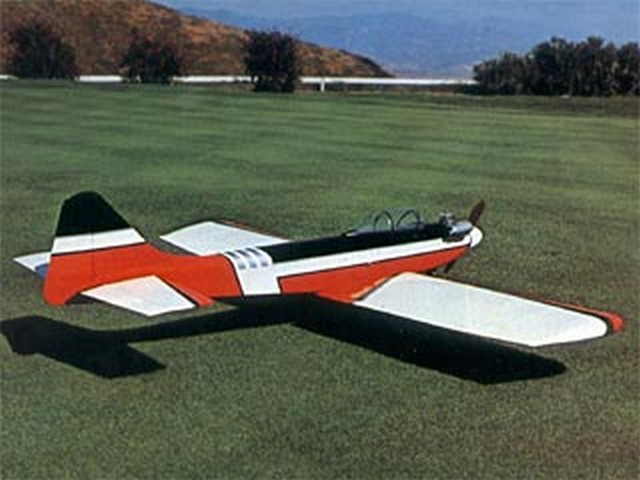