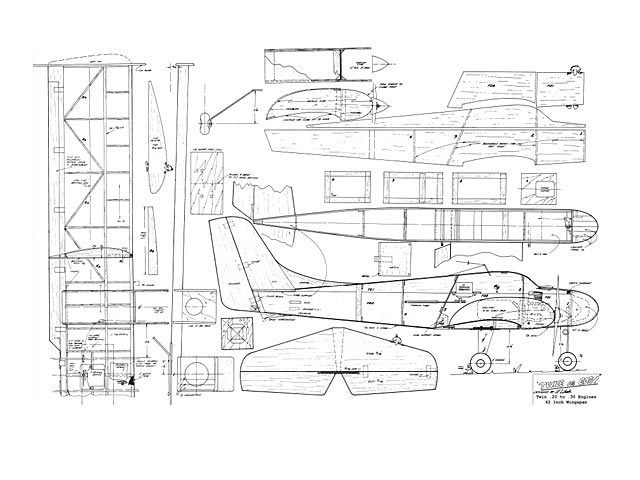 Quote: "A twin seemed the logical outgrowth of the original Eee-Z-Fli (oz12170) series (Model Builder, September 1989), particularly when so many of the Maui RC pilots are nervous about being surrounded by so much water. After all, twins are safer, right?

Development of the twin followed the basic concepts of the earlier Eee-Z-Fli series. Ease of construction without exotic material requirements and good flight characteristics were prime considerations. A reasonable basic appearance and ease of repair were also felt to be important. In order to keep both size and cost within the acceptable range of a first-time twin builder, the aircraft was designed to use a pair of .25 size
engines.

Flight testing with a pair of OS 25FPs has been a joy from the first takeoff. The initial flight was no less than 'text book,' requiring only one notch of down elevator. Ground handling and tracking are good, ease of rotation indicates proper main gear location, and all phases of normal flight indicate excellent stability with no slow flight problems. With reduced power, approaches are normal, and flare and touchdown on the mains can best be described as routine. The aircraft is fast, the roll rate is exciting and the climb is most satisfactory.

The most frequent comments from bystanders regard the sound - even on the ground a twin has a sound quite unlike anything else. The area of most concern to the writer was the loss of one engine and its resulting directional control effect. It was not possible to shut one down as both engines operate from the same throttle servo, so - fly it and someday one will quit! When that did happen it pointed out one of the most gratifying flight characteristics of all. TWICE AS EASY handles single engine flight with ease. Reduce power on the remaining engine, retaining sufficient power to keep flying, and there is no wing drop or yaw problem beyond what is easily controlled. Loss of the left engine on a climb out for a left-hand pattern was no problem; a reduction in power to about half throttle and the left pattern was continued with no problems in turning into the dead engine. Approach and landing are normal on one engine, either right or left, but you cannot taxi, except in circles into the dead engine.

In summary, TWICE AS EASY is an ideal first twin. It's easy and inexpensive to build and its flight envelope doesn't seem to have any "hidden corners." So, if the sound of twin engines stirs your imagination, clean off the workbench and start cutting wood, it's TWICE AS EASY!

GENERAL NOTES
1. It is recommended that all parts be cut out prior to the start of construction, the same as a kit.
2. It is important that the wing be built flat, as this type of construction is quite rigid and resists corrective warping.
3. Numerous choices are left up to the builder, such as engine brand, covering material, fuel tank make and general hard-ware selection. Selections used on the proto-type will be noted in the appropriate section of the instructions.

Fuselage: Select matched sheets of 1/8 medium hard balsa and cut ES-1 and FS-2. Edge join them on a flat surface. Cut FD-1 and FD-2 and cement them to the sides, starting with FD-1. Position FD-1 1/8 of an inch back from the front end of the fuselage side. Using a piece of scrap, position FD-2 1/8 of an inch behind the aft edge of FD-1. This provides a slot for the installation of B-2. Install the vertical 1/2x/8 pieces in the aft fuselage. Mark and cut the pushrod slots. Install B-2 in the slot on one fuselage side and B-3 flush against the aft side of FD-2. Join the fuselage sides by cementing B-2 and B-3 to the remaining side. Do this on a flat surface and use a square to align the sides at the aft end. Install FD-3 and FD-4. Align and install BI in the slots at the forward end of the fuselage. Install the triangular vertical braces.

Pull the aft ends of the fuselage together, assure good alignment, secure with clothes-pins, and cement. Install the top and bottom braces in the aft fuselage. Install the filler block at the aft end of the fuselage and the mounting pad under the stabilizer attachment point. The bottom of the fuselage aft of B-4 may be covered with 1/16 balsa. Install the 1 /2x1 /8 cross brace at the top of the cabin area and cover the top of the fuselage from the base of the windshield back to the stab cutout with 1/16 balsa. Servo support rails may now be installed on the top face of FD-2. Position the aft support against the forward face of B-3 and the forward support to accommodate the servos to be used. The installation shown is Futaba. Golden Rod or wood pushrods may be used; the prototype used wood pushrods for less flex.

The nose gear support may be installed on the aft side of B-1 and the nose block supports cemented to the front side. The nose block is carved from a blank laminated from 1/2-inch soft balsa as shown. The hatch and retainer tongue are made from 1/8 medium balsa and secured with two screws in the front corners. Cover the forward fuselage bottom from B-1 to B-2 with 1/8 balsa and provide a slot in the front edge to clear the nose landing gear. Install the hardwood skid at the aft bottom end of the fuselage. The fuselage may now be sanded and put aside for covering.

Tail Surfaces: All surfaces are 3/16 medium hard balsa. Elevators are joined with 3/16 dowel as shown. Join them on a flat surface and be sure the leading edge is straight and that both elevator trailing edges are aligned. Cut hinge slots and cement the hinges into the stab only. Join the fin and dorsal. Cut hinge slots and install hinges in the fin and fuselage only. Trial fit the stabilizer and fin to the fuselage and trim if required. Do not attach the fin to the stab yet. Sand all edges round and put the tail surfaces aside for covering.

Wings: Select four matched sheets of 1/16x4 medium hard balsa and, working on the plans, cut and edge join the bottom wing sheets. Working on the plan, mark the spar and rib locations with a ballpoint pen. 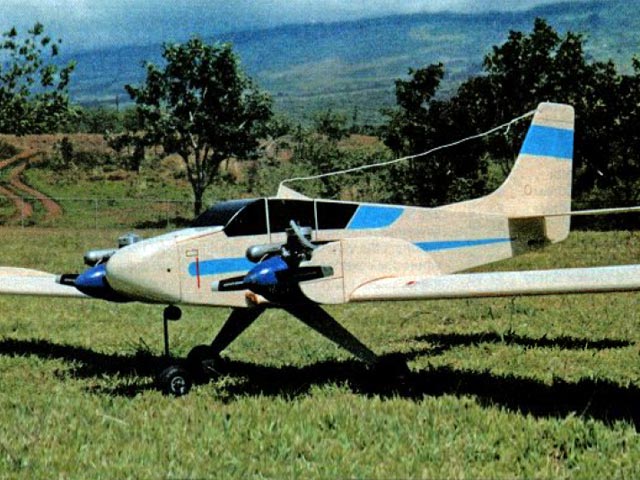