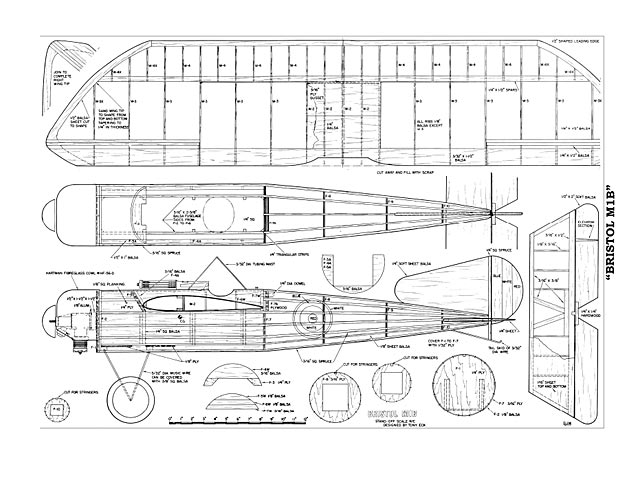 Quote: "From the air above the trenches of France to model flying fields in New Jersey. Bristol M1B monoplane, by Tony Eck.

For some years now I have wanted to design a different aircraft, one that has not been seen around. A large order? That's just the start of it I also wanted the aircraft to be easy to construct, to have all the qualities that would make it a memorable Stand-Off Scale aircraft and I wanted the machine to be a good size, yet able to fly well with a .40 R/C engine.

One night my wife decided to go out shopping and would I mind? When she left. I descended to my home away from home, the cellar, with my daughters, one and three for company. I started looking for my dream ship. It didn't take long. I found it quite unexpectedly when my oldest girl found a Profile of the Bristol M.1. She said that this is the one that I should do because it has all the good points that I want. It just so happened that this was the one I wanted to do anyway, so we all started.

Designated the Bristol M1A and powered by a 110 horse-power Clerget 92 engine, the prototype of this fighter emerged in July 1916. It must have been one of the simplest and cleanest aircraft of its day. for Mr Barnwell had designed the fabric covered fuselage to be fully faired throughout its length, and fomers and full length stringers preserved a circular cross-section to a point behind the wing. From there aft, the fairing tapered smoothly to the rudder post.

The wings were attached to the upper longerons, their outer leading edges being given a wide semi-elliptical sweep, back to the tips. This allowed two thirds of the span of the broad-chord ailerons to run along the extensions of the rear spars.

The M1A's first flight took place on the 14th of July, 1916 at Filton. The pilot was FP Raynham, and the speed attained was a phenomenal 132 mph. Despite the lack of official enthusiasm for the Bristol monoplane, it must have impressed some of its pilots, or at least some of those who saw it fly, for it became the subject of optimistic rumors and eager expectations in RFC fighter squadrons in France.

The model presented here is approximately 1-3/4 in to the foot, and a Stand-Off replica, rather than an exact miniature of the aircraft. It makes a realistic and sturdy flying machine,

Construction. The fuselage is assembled by first making a box from the fuselage sides, 3/16 x 2-5/8 in balsa sheet (hard) and the 1/8 in balsa floor. Be sure that the sides are 90 degrees to the flooring. After this has dried, glue the assembly to F.2 as shown on the plan..." 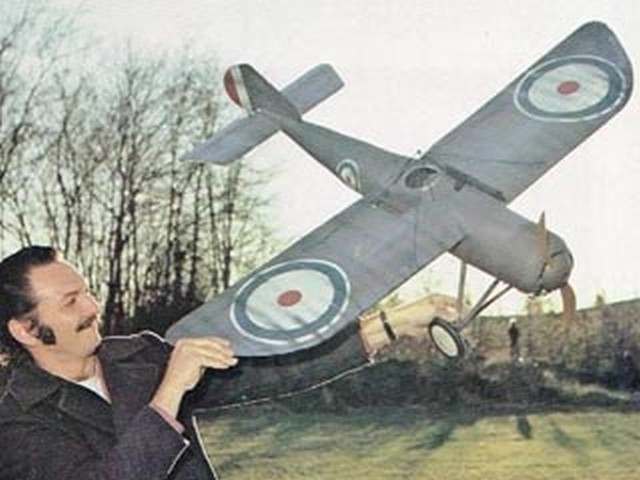