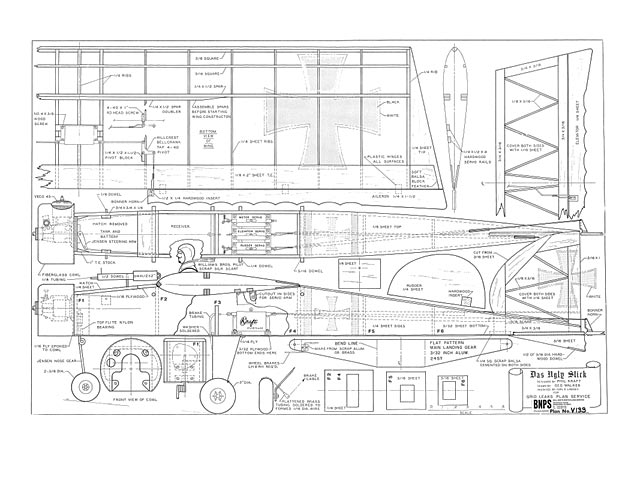 Quote: "THE ORIGINAL CONCEPT of the Ugly Stik was to design a radio controlled aircraft which could be built in an absolute minimum of time. Its purpose was towards a flying test bed for new proportional control developments and an all-around shop airplane which could be used as a loaner for visiting flyers, testing repaired equipment, and any use which required an airplane which could he considered as expendable.

In the original form, the Ugly Stik was completely square. All surfaces were merely cut out of standard sizes of wood with no curves or frills whatsoever. The plans were finished on a Sunday afternoon some two years ago. A visit to our local hobby shop was made at approximately 4:30 to purchase the wood and other necessary materials. Taking time out for Sunday dinner, still the framework was completed by 10:00 o'clock that evening. Two more evenings were required for covering and doping, and on Thursday of that week, the ship was first flown.

Obviously not much time was taken in sanding or painting. This was to be an expendable, utility airplane. As with most straight-forward functional designs, the Ugly Stik proved to be an excellent flyer. It was extremely stable, very easy to fly, and quite capable of contest performance. I am not sure who first applied the name Ugly Stik to the design, but whoever it was certainly applied a descriptive name. Wherever it was flown, I was subjected to a great deal of kidding about finally having developed an airplane even uglier than the Kwik Fli (oz6526). There were also a great many requests for plans, particularly among the newcomers to radio control who wished for an easy-to-fly, rugged, expendable airplane to learn on - which this surely is.

There was in this early square design something suggestive of a World War I type aircraft. As a joke with assorted scribbling on the plans, we came up with a design vaguely reminiscent of the Fokker Eindecker. The results were perhaps no less ugly, but did tend to produce a design with a certain amount of charm and appeal. Certainly it never fails to create a great deal of attention among the spectators at the local flying field.

Performance-wise, it of course can not be classed as an all out competition Class III model. However, it is certainly capable of winning contests in the hands of a good flyer. While the design has not been used a great deal for contest work, it has several wins to its credit in Class III. Its main virtue is as a trainer for the beginner in control. I have always felt that is a waste of time for newcomers in our hobby to spend over a hundred hours on an elaborate Class III design to learn on. Inevitably, unless the beginner is of remarkably unusual talent, he's going to have minor or major accidents due to misjudgment in learning. Therefore the Ugly Stick fits the requirements perfectly as a trainer. It is about as simple as possible to construct. As stated before, it is rugged and very easy to fly.

For those merely wishing an expendable trainer, the scalloped strip ailerons, elevator and rudder can be dispensed with, and just straight forward construction used. However, the details toward making an early type of German World War I airplane add only an hour or so to the building time and create quite a novel appearance.

Construction is so straight forward that very little in the way of detailed step by step instructions are required. The grade of wood used throughout is not particularly critical as the flying weight can vary from 5-1/4 to 6-1/2 pounds without materially affecting performance. Actually the Ugly Stik flies best at about 6 pounds using .56 to .60 engines. This gives lively flying.

The fuselage is absolutely straight and flat on the bottom. The first step in construction should be to cut the 3/32 ply-wood bottom sheet as indicated on the plans. Pin this to a flat work surface, along with the 3/32 bottom planking which is spliced to the plywood nosepiece. The fuse-lage sides are cut from 1/4" sheet balsa as well as the bulkheads with the exception of the 1/4" plywood firewall. Cement the bulkheads to the bottom sheet and then merely position the fuselage sides against the bulkheads and the bottom sheet. The firewall should he secured with a liberal application of cpoxi cement for strength.

The stabilizer, elevator, fin and rudder can be cut from soft 1/4 in balsa sheet, although it is preferable to use the built up construction shown. The elevator can he installed during fuselage construction. if your work surface is large enough to accommodate it flat against the bottom sheeting. The construction is so designed that the fuselage can be completed includ-ing servo mounts, stabilizer, and rudder all in one step.

The wing has no dihedral, and the ribs are flat from the bottom spar to the rear, Therefore, no jig is required and the wing can be completed on any flat work surface. For maximum simplicity, the aileron linkage is external and holes are cut in the side of the fuselage to Mow clearance for the servo as well as the piano wire pushrods to the aileron bellcranks.

On the original, only the wing was covered with silk. On the balance of the wood surface I merely utilized a good dope. The open frame construction of the wing has given no problem with warping, though we have seen some examples of other Ugly Stiks where apparently the builder propped it wrong while the dope was drying, resulting in some rather severe warps. Actually, removing warps from an open frame wing structure of this type is extremely easy. It only requires the use of heat while twisting against the warp to insure a flat wing surface.

Flying of the Ugly Stik is equally as simple as the construction. The design is not overly critical to center of gravity location. It should balance approximately on the main spar or slightly to the rear. No thrust offsets are used.

To sum up, considering the minimum amount of time and effort put into construction. I doubt that we have ever had more fun flying a radio-controlled model aircraft. We believe it is an excellent choice for the beginner and an ideal trainer for multi proportional flying. Hope you enjoy it!"

Quote: "There are at least three versions of these plans. The first one I saw was when John Pond still had his plans service, and Phil Kraft drew a special edition for him, now available through AMA plans service. That version has the initial design of no dihedral or false ribs but included the built-up, sheeted tail surfaces.

The Jensen kit version was changed a little for producing the kit of that name. That version has noticeable dihedral, false ribs at the leading edge and a solid sheet tail assembly.

The version I sent you here is a copy of the original drawings as sold by the 'Grid Leaks' magazine and has no dihedral, no false ribs, but with the built-up and sheeted tail assembly.

The pictured airplane I built was from the Pond plans. For interested modelers, a US company named LazerWorks has a laser-cut kit that will neatly work with any of those three drawing versions. My example is per print except I used a K&B .45 Sportster instead of the VECO .45 called out on the plans, was covered in Coverite and Fabrikote, with Sig butyrate dope, instead of silk. A great flying airplane. I was told by Danny Lutz, who worked at Kraft Systems for quite a while, that Phil would usually use an Enya .60TV for power. If you use color on the thumbnails on your site, there will be those who say K&B never made a Greenhead .45 Sportster and they would be correct. I painted it as a fake VECO :)..." 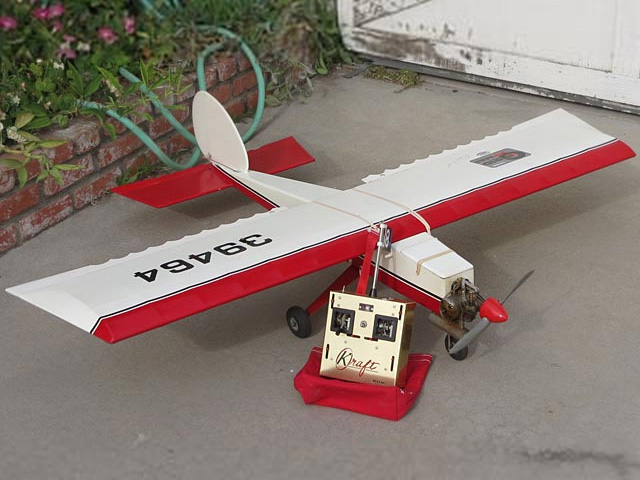 Photo [more pics 008] of Das Ugly Stick, built from Outerzone plan.
GeorgeSlocombe - 26/06/2016
Hello Steve and Mary, Here's my build of the Ugly Stik based on the Grid Leaks plans [more pics 009, 010]. I didn't follow the plan exactly as I used an electro setup. The 1/4" sides are replaced with 1/8" sides for example. I also used a D-box and webbing (with 1 mm balsa!) on the wing for greater stiffness and adopted some other building techniques, including making the tailpieces lighter. The outlines however are 100% Ugly Stik. I also included 2 degrees of motor incidence, no side thrust. Electro setup is a SK3 5045-450 kv motor, on 6S 3700 mAh LiPo with a 15x8 prop and with this setup it flies like a madman :) Weight is 2626 grams. Build report in Dutch can be found here: www.modelbouwforum.nl/threads Thanks for Outerzone!
DriesNeyrinck - 15/11/2016
Latest project is a classic Ugly Stik, most popular model ever built, worldwide. Right now, I'm re-drawing the plans to lighten it up a bit for electric power, same size as the original, built as a low wing taildragger. As to how it got its name, when Phil Kraft showed up at the field with his first version, the guys present said, "Damn, Phil, that thing looks like it was beat with an ugly stick". The rest is history.
DougSmith - 15/12/2016
Add a comment