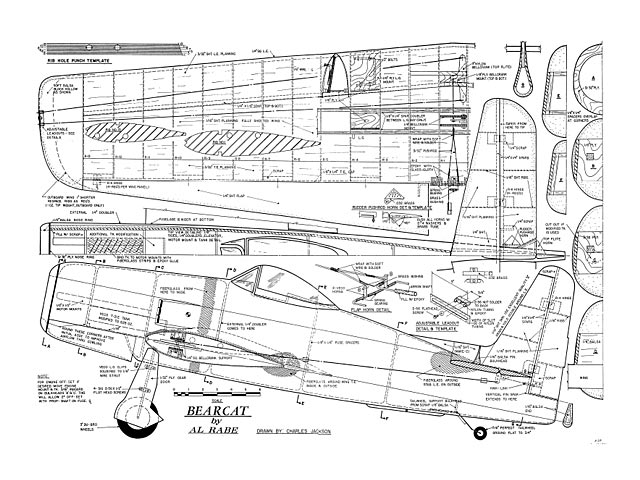 Quote: "STUNT design is in a rut. The proven moments and areas to which we have all been slavishly adhering only represent what has already been tried and found to work. These self-imposed limits have virtually stopped the development or stunt ships since the Nobler (oz6212). Yes, I know that it takes a whole winter to build next year's hope for glory, but when I have something hanging on the wall that flies, I tend to get awfully reckless with my spare time and have been known to follow some pretty weird tangents in an effort to improve the looks and performance of stunt ships. With my Mustang (oz6372) and Bearcat. I feel that I've begun to hit pay dirt. The indications are that as long as simple rules of aerodynamics are followed and competition construction techniques are used (build it straight and nearly anything can be made to fly competitively. What better way is there to prove a point than to build a successful but unlikely airplane.

The opportunity to build that different airplane came about a month after the 1967 FAI team selection. Dick Mathis dropped over for the evening to show his movies of the '67 Nats stunt event and the FAI ships at St, Louis where he judged. Afterward, we talked long into the night about stunt ship design and his research paper 'The Psychology of Stunt Judging.'

After interviewing the '67 Nats stunt judges and tabulating the scores. Dick concluded that the appearance of the airplane strongly affects the judges scoring. Dick felt the optimum design for best scores should be either sleek and sensual like a Detroit automobile stylist might build or a semi-scale type, preferably Navy. Asa matter or fact, Dick thought the Bearcat would be hard to beat if it could be made to fly.

Dick's words were prophetic. At the '69 Nats, the Bearcat placed an undeserved second. There was no doubt that the judges loved the Bearcat as my scores were considerably higher than my flying deserved. In this, my second year of competition, the pressure was getting to me and I was a nervous wreck. Because of my poor showing, some of the big names in stunt thought the Bearcat only an average airplane at the Nats competition level. Tain't so. She's a grand machine and I'm proud of her in spite of possessing a new Mustang which flies somewhat better, I still prefer to fly the Bearcat. She is a happy design and competitive on any level with a competent pilot.

I am frequently asked how any airplane as fat as the Bearcat could possibly stunt competitively. The answer - the drag increase is slight - is difficult to swallow unless a person has some understanding of the nature of drag. Some explanation of drag is worthwhile as it should encourage the development of radically different, better looking, possibly better flying stunt ships.

Aerodynamic drag has two major components. The first component of drag is induced drag or that drag which is created when you make lift. This induced drag is low at low angles of attack and very high at high angles of attack as in a corner. The other major component of drag is parasitic drag which opposes the movement of any body through the air. Parasitic drag also has two components, skin friction and profile drag or drag due to shape or form.

To understand some of the elements of indused and parasitic drag and how they affect stunt ship design let's compare the Bearcat's drag to a Nobler's drag..."

Article pages, text and pics, thanks to Pit. Also copy of previous scan. 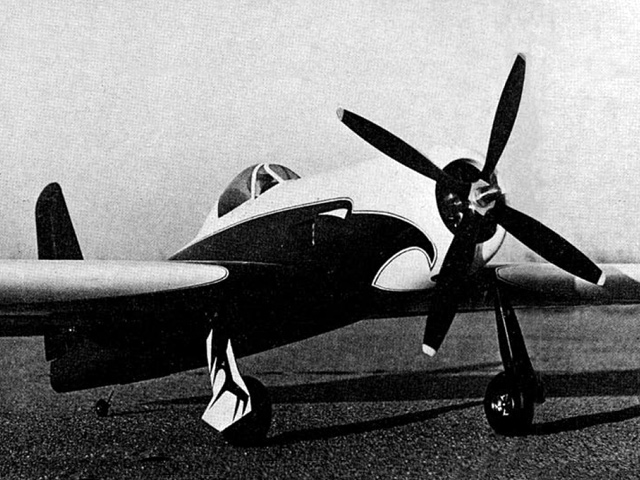