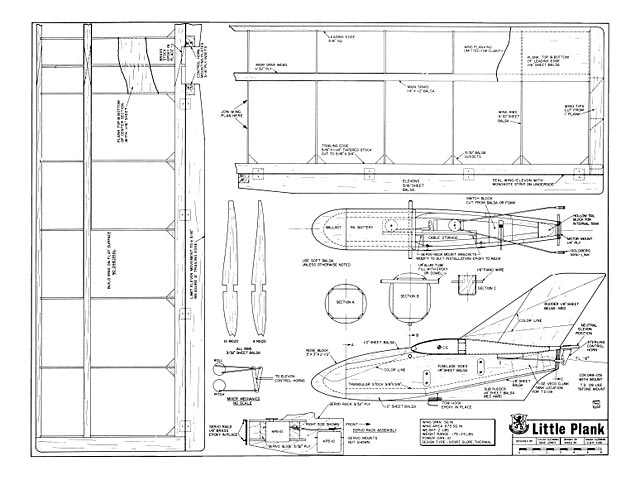 Quote: "Editors Preface: After receiving the construction article for the Little Plank from the authors, Chuck Clemans and Dave Jones, I was totally intrigued by the design of the aircraft and by its performance potential. The RCM prototype which I constructed from the authors original plans weighed 25 ounces and had a wing loading of approximately 5 ounces per square foot. The amount of 'rake-up' of the elevons proved to be less than shown on the plans and no engine of any type was used, our Little Plank prototype being set up for Hi-Start and electric winch usage.

The first few flights required some sorting out of the aircraft to obtain the proper trim for thermal flying. The model proved to be one of the most remarkable thermal soaring machines we have flown to date and competed favorably with many high performance thermal machines in the area. In fact, the full thermal potential of this ship was never fully realized even with over 100 flights to its credit.

It goes up on an electric winch, or Hi-Start, like it was on rails and, while its flight speed is quite fast compared to the conventional sailplane, it virtually acts as a 'thermal sensor' in the air. Without any dihedral whatsoever, and its extremely low wing loading, the model reacts to even the smallest thermal by raising a wing tip sharply. Turns can be made so tight that it is almost like a pylon racer and staying in a thermal is virtually a unique experience. While the Little Plank can be thermaled in a circular flight path similar to any conventional sailplane, by applying full up trim on our particular prototype, the model would shoot straight up the center of the thermal.

Once properly trimmed, and once the flyer has become used to this unusual machine, we found that it equalled the best thermal times of the high performance ships that we pitted against it. The Little Plank is definitely not a beginners machine by any stretch of the imagination. With sensitive elevons, no dihedral, and a fast forward flying speed coupled with excellent penetration, the Little Plank requires your constant attention to fly it. You cannot take your eyes off this ship and expect it to be in the same attitude as you left it! This ship is more analogous to flying a full house competition multi insofar as it has to be flown all of the time and you can easily become disoriented due to its configuration.

We were extremely impressed with the performance characteristics of this model and its ability to perform with the best of them in thermal competition. If you are a soaring pilot who has passed the novice stage, we recommend this design to you for a complete change of pace in soaring as well as a challenge to your thermal piloting skill. It is an excellent design based upon several years of research by the authors and has a performance potential that has yet to be reached to its fullest extent..." 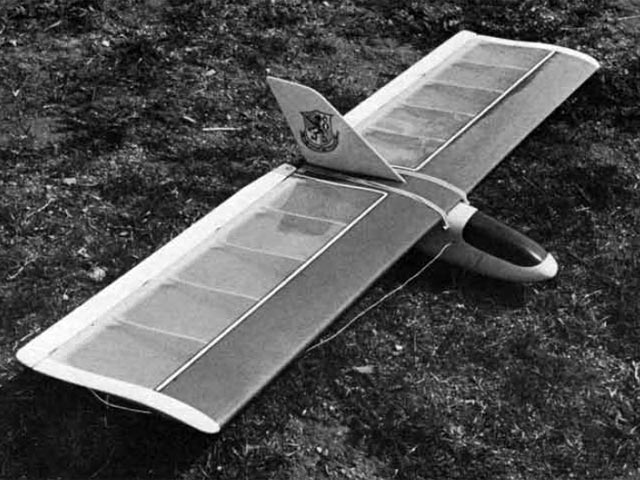