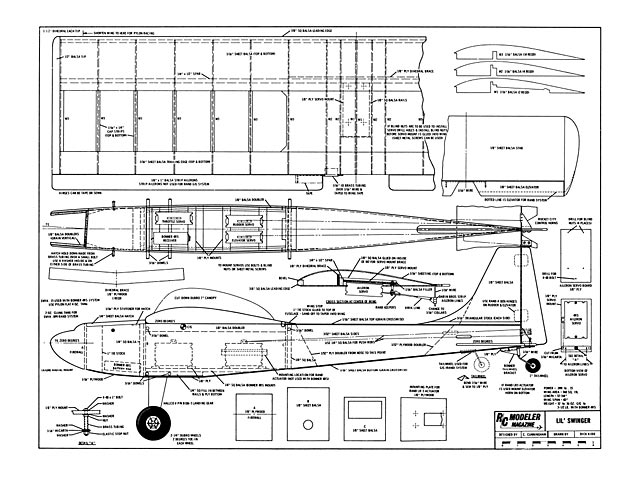 Quote: "40 inches of swingin' machine for .09 to .19. Designed for the Bonner 4RS or Galloping Ghost systems.

THE Li'l Swinger was designed with only one basic thought in the author's mind to design a ship that would be highly suitable as a trainer for Galloping Ghost type of flying. And, the Li'l Swinger is that, alright. But I had forgotten, for the moment at least, about our Editor and Fearless Leader! After shipping him the plans, what was to be a GG trainer turned out as a full-house, Class III for the new miniature Bonner 4RS digital system!

So, you can pay your money and take your choice. As a by-product, it is sturdy because it was meant to be. It is cute, 'cause almost any little ship is cute. And, it is a ball to fly, because it is simple with no extra frills.

For best results on Galloping Ghost, use an Enya .099 or Max .10 R/C. My prototype used the former which is a handful of power. I borrowed a little hint from my Enya .60 and opened up the throttle ven-turi by turning out the needle valve seat one turn. This really added some rpm!

For the Bonner 4RS version, Don used a Max .19. Although the nose was designed for a two-ounce plastic bottle tank, one of the newer 4-ounce rectangular bottle clunk tanks fitted perfectly with nary a hair to spare!

The fuselage is beefed up enough to take the whacks of many, many bad landings. and the rudder is large enough to give good precise control at almost any speed and position.

You will note on the plans that the hinges are shown made from tape, and used in a figure eight manner. I was working on this idea when "Big Daddy" Ken Willard mentioned the same thought in his write up of the Top Dawg (oz901). I have used them on several ships and have experienced no trouble at all. Use 3M decorator tape in the small width. Cut pieces about one-and-one-quarter inch long. Match sticky side to sticky side and lap about one fourth of an inch. Place them on the surface to he hinged in the same manner as figure eight type cloth hinges, press firmly into position, and you're done. It's cheap, simple, and has the advantage of giving you a very free hinge movement, a must for galloping ghost.

The name for the Li'l Swinger is kinda obvious, it's a swinging ship, and it gets its control from all of that stuff on the back end swinging back and forth. Back in the old days, before the modern GG gear such as the Rand GG Pak used in this ship, we had to hang a mass of wire on the tail surfaces to get the job done. If this ship had come along then, keeping the naming idea in mind, it could have been called the Plumber's Friend!

The real test of any aircraft is in the flying. and since that is really the ultimate goal here, let's get into flying not only the Li'l Swinger, but in flying galloping ghost in general.

On any GG ship the important thing to watch far is that both of the control sur-faces are pulsing around neutral, and that when you give an up. you get up, and when you give a right you get a right. If you don't, then go no farther, but dig into the controls and see what is wrong..." 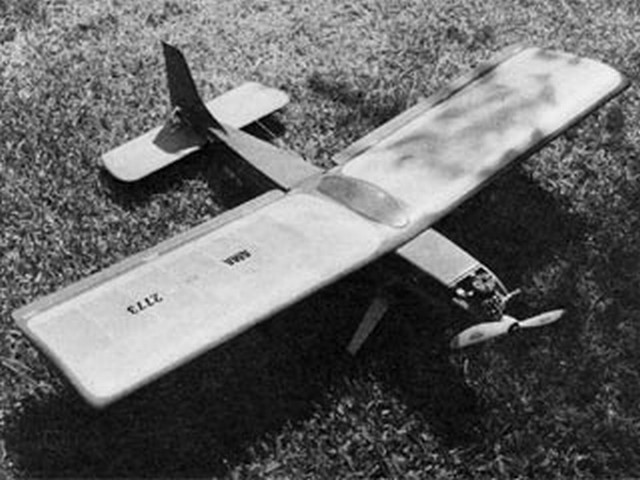