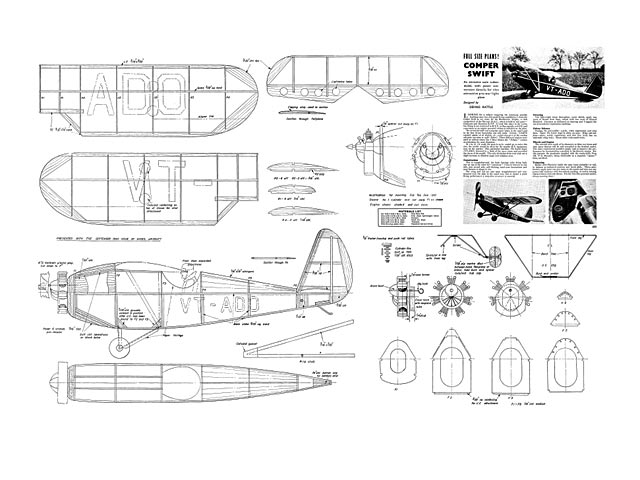 LOOKING for a subject requiring the minimum possible building time, but with good flying capabilities, I chose the Comper Swift as my entry for the Blackbourn Trophy, a club competition of the Glevum MAC, which is held in two parts - Concours and Duration RTP. It took first place in the event, but flying is not restricted to RTP, it flies equally well F/F and conversion to an engine powered version is included on the plan.

The actual aircraft was a popular sport plane in the 1930s and to the best of my knowledge one still exists. (Correct: GA-BUS regularly appears at air displays, etc, cockpit close-up is of this machine and photo was taken in 1958 - Editor.) Three different engines were used at various times, but I have chosen the 'Pobjoy' version as possessing the most character.

At 1 in to 1 ft scale, the span is 24 in., scaled up to twice this size, the model would be ideal for the smaller R/C equipment now on the market. This particular machine, The Scarlet Angel, (VT-ADO) featured in a book of the same name and provided the decor of the model. The only deviations from true scale are a slight increase in dihedral angle and tailplane area.

Construction. This is straightforward, the basic fuselage sides being built one on top of the other for 'sameness.' Cement formers to one side, join second side, add decking, sand nose laminations and nose formers to shape in situ. The wing and tail are also quite straightforward and constructed over the plan in the usual way, but to ensure a good flying performance a warp-free structure is essential.

Quote: "Hi Steve. Just another one for your arsenal of plans. This Comper Swift 24in span, came as a free pull out in the september 1963 model aircraft magazine." 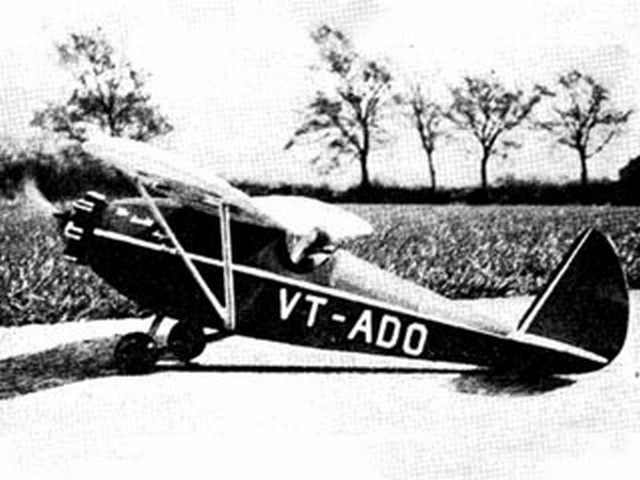 Dear Steve, Dennis Rattle - Comper Swift. I made at least 3 of these in the '60's for rubber and for 010 Tee-Dees. They all flew well, but it's obviously best to make the wings detachable. The model is quite accurate; the only major mistake, which is easily rectified, is that the undercarriage rear radius rods should join to the middle of the fuselage, not the sides. The D P Golding Comper is also pretty accurate. Don't bother with the other available plans, as they are not at all good, although the Ray Booth one is obviously ok for kit scale except for the proximity of the spacers to the rubber motor.
RichardFalconer - 27/05/2014
Add a comment