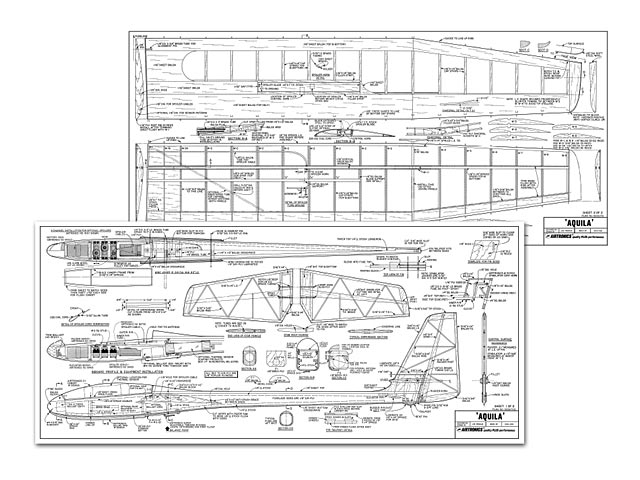 The wing chord is 9in to increase Reynolds number and provide increased wing area. We feel that these factors are more important than the reduction in induced drag from higher aspect ratios. The wider chord provides greater visibility at high altitudes since the width of the wing is more significant than the span. The increased area also provides higher launches as it will carry the weight of the launch line better than the smaller area ships. (As long as all models are flown on the same launch equipment and the launch device is sized to lift the big ships the smaller ships are at a disadvantage.)

The airfoil is a medium thickness. flat bottomed section with a low entry point. The leading edge radius is fairly large to provide a soft stall and the high point is located at 30%. Our experience shows that this type of airfoil performs better than the undercambered sections under all conditions except dead calm. Since some wind seems to prevail during most contests, the ease of building and covering far offsets the minor loss of performance under atypical conditions.

The wing planform with constant chord center panels and double tapered tips is nearly as efficient as an elliptical planform and much easier to build and repair. Positive Hoerner tips are utilized to reduce tip vortex losses and increase effective span. This style tip is used on the full-scale Duster sailplane and discussions with Hank Thor, the Duster designer, while researching a scale model convinced us that this type of tip would improve model performance. Polyhedral is used because of the superior turn characteristics over Vee dihedral. The change in leading edge radius on the tip panels eliminates tip stalling and avoids the loss of lift caused when wash out is used for this purpose..."

Quote: "Hi Steve - Here is Lee Renaud's Aquila from the defunct Airtronics model company. The scan is from the original kit plan. Skip Miller's world championship with the Aquila, in 1977, inspired me to buy the kit. The Aquila and our first child arrived at the same time and ... as John Lennon wrote, 'Life is what happens to you while you're busy making other plans.' The Aquila still resides in its box on my shop shelf!" 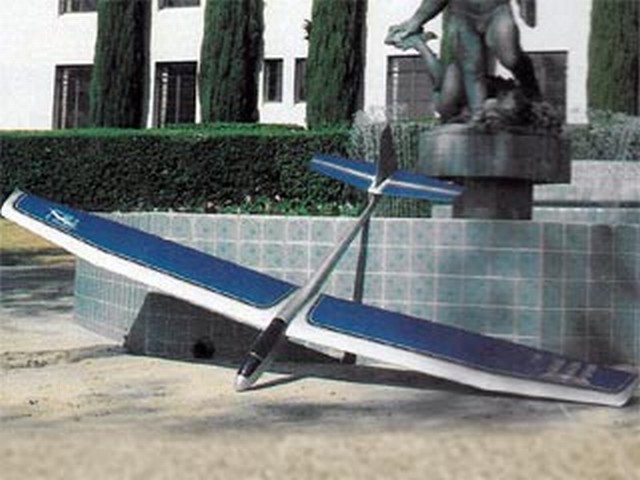 It seems the Airtronics plan and the RCM plan were almost identical. Quoting ThermalSniffer : - "The only difference is the design credit box in the lower right. I have the kit and the kit plan consists of 2 sheets identical to those in the magazine. There was no parts sheet, all parts are shown on the plans already."
SteveWMD - 03/06/2015
Hello. I want to introduce glider Aquila, which built in 2013 [see more pics 004-006]. The glider was built entirely by me, using only the plans. It was equipped with an electric motor Turnigy 3536 1250 kV, 60A ESC, propeller 11x4. rudder and elevator are driven hitec hs 81, brakes HXT 900 battery 2200 mAh 3S.
Christopher - 12/10/2015
Just wondered if you could use a picture to give scale [more pics 007]. Fantastic site, thank you so much!
Charles - 23/09/2016
Lovely picture, Charles. Who is the sweet little boy?
Mary - 10/10/2016
The picture is my son Phillip, taken in 1975. I hate to show you the subsequent photo, but here it is ... tree'd in Dundas, Ontario [more pics 008].
Charles - 10/10/2016
Hallo - Aquila, scratch built from Outerzone plans [more pics 009, 010]. Greets
JJDeweerdt - 20/01/2017
Suggestion rather than a correction: I built my Aquila about 1978 and before starting the project took the plans to a meeting of my model club and asked if there were any modifications I should make. These guys were mostly very experienced glider pilots and some worked for NASA at Langley. For what its worth they told me that a known issue was the thickness of the horizontal stabilizer and recommended thickening it by 50%.
anon - 03/09/2017
Aquilas at the Virgen de los Remedios Trophy, September 2019 [more pics 011-013].
AntonioRG - 22/09/2019
Looks wonderful, it will be my next project
Jack - 02/11/2019
Hi Guys, I wonder if you could add to your oz5136 plan a couple of photos of my modified Aquila, here attached [more pics 014,015]. Thanks a lot and congrats for your beautiful database.
Cheers,
Sergio - 10/02/2020
Lovely pictures from everyone and interesting comments too. I loved my Aquila because it flew very well. I tried just leaving the controls once it was going up in a thermal and the glider merrily kept to the thermal going up all the time without any input from me. I read about this in the building instructions and found that it really worked.
Ron Ashworth - 23/10/2020
Photos of the Aquila [pics 016-018] from Conrado Maccarini, F.A.A ARG CACM0009, F.A.I. 137213 El Palomar, Bs. As. Argentina. 2019
Conrado Maccarini - 28/01/2021
Add a comment