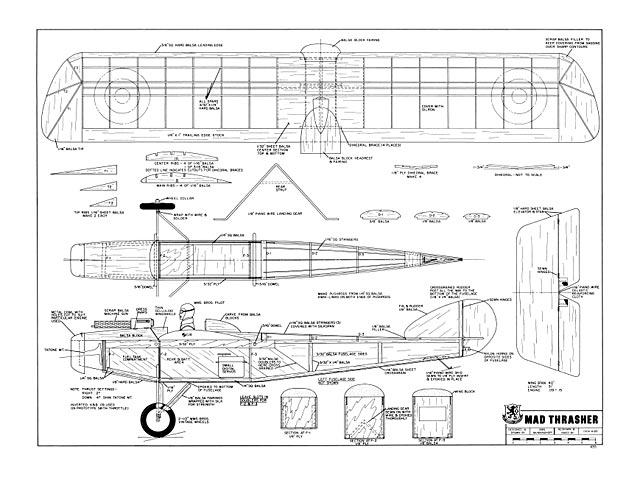 Quote: ".09 to .15 powered vintage-style sport aircraft for Galoping Ghost or small digital proportional systems, an excellent aircraft for the sport and Sunday flier as well as for flying in small, confined fields.

Several years ago, when Galloping Ghost was considerably more popular than it is now, RCM's Fearless Leader published a small scale-like German GG design of his called the Wolfmeister LR-3 (oz6209). It was a cute little .09 sized ship with typically German scalloped trailing edges, WWI markings, and somewhat of an Eindekker look about it. When one of the other members of our club built one, I decided that I needed a plane in the same category as a flying companion for the Wolfmeister. A British antagonist was in order!

The final design combined the features that I liked best of several Allied WWI planes with the simplest possible construction techniques. The result was a British tail-flapper - hence: the Mad Thrasher. However, the dream of aerial combat was dashed prior to the Mad Thrasher's completion when the Gelman flew into a goal post and was wiped out. So now the Mad Thrasher flies alone - victorious by default. This design, by the way, won first place in the Model Aircraft Sport Design Competition held by RCM a few years ago.

When really small reliable digital proportional came into vogue not long ago, the Mad Thrasher became the test bed for my new Royal Classic. Even the relatively large PS-3 serves fitted into the small fuselage. The improved controllability provided by the digital radio greatly increased the performance of the Thrasher. It is now a pleasant change of pace from flying the hot pattern ships.

Let's put one together. Actually, the Mad Thrasher is a very simple plane to build. The fuselige is the standard box-type that is dressed up a bit by the metal cowling and a built-up turtle deck. Start construction by cutting out all the required parts for the fuselage. As you can sue, there aren't many. Start with the fuselage sides, laying them on a flat surface and putting in the 3/32 balsa doublers (cross-grained), the plywood reinforcing doubler, and the tail-end vertical bracing. (Don't forget to make one left and one right side!)

While these arc drying, put a coat of Tilebond glue on the edges of all three bulkheads and also along the sides of the fuselage where these formers will be attached. Sew the landing gear to the plywood former with copper wire. When everything is dry. reglue the formers to one half of the fuselage..." 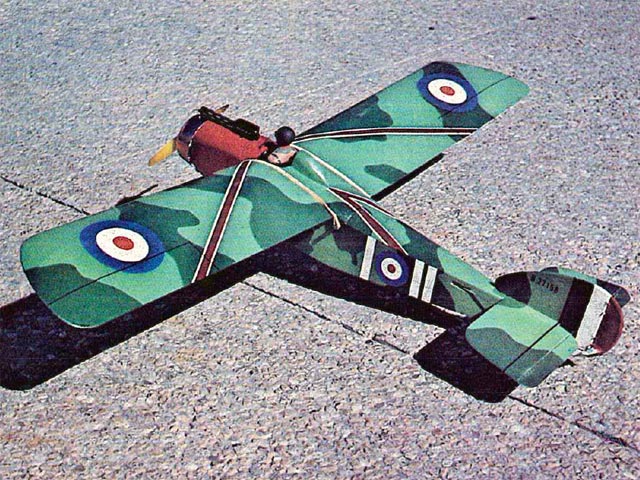