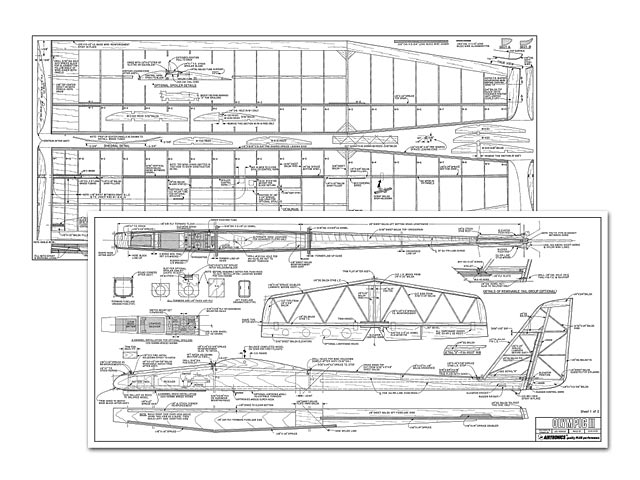 Published in RCM June 1976, the Olympic II was also later kitted by Airtronics. The RCM and Airtronics plans are essentially the same, only the title block is different.

Quote: "Since its introduction in 1967, the Olympic has become the single most popular sailplane design in the world. Now the Olympic II - and a new dimension in soaring. By Lee Renaud.

Preface: The Olympic sailplane has established itself as one of the nation's most popular R/C sailplanes. Although designed as a trainer, the long list of contest wins proves that the design has been very competitive in Standard Class contests. Many sailplane fliers learned to fly with an Olympic, then went on to become contest threats. When Lee decided to develop a replacement for this classic sailplane, we asked him to write this construction article.

The design was laid out over a year ago and prototypes have been flying in several parts of the country as part of an extensive test program. The basic design has been proven and flown under all weather conditions, and refined to the final configuration presented in this article. The result is a brand new airplane which shares no parts from the original, and which flies and handles even better than the Olympic.

The Aquila (oz5136) sailplane, published in the May 1975 issue of RCM, has been one of our most popular selling plans. The design has been very successful in its first contest season and is being flown by many of the country's top pilots. The Olympic II is a more functional ship, designed for easy building for the less experienced modeler. It's not as pretty as the Aquila, but flies just as well, if not better in weak lift. We've flown all of Lee's designs, including the Olympic, and rate the new Olympic II as the best yet. If you are a raw beginner who has neverflown a sailplane, or a contest pilot looking for a competitive Standard Class ship, the Olympic II will fill the bill.

Due to the extreme length of the highly detailed step-by-step construction article, we were unable to present this portion of the text in this issue. However, the complete article, including the construction sequence will accompany each set of plans ordered for the Olympic II. Try it, you'll like it! - Don Dewey.

The original Olympic sailplane was designed in 1967 and first flown early in 1969. The design evolved from Frank Zaic's original Thermic 100 (oz1573), which dates back to 1940! In fact, the Olympic uses the center panels from the 100 with a straight tapered tip design replacing the original 'Wolf' outline. The long tail moment, large stab with restricted elevator, and polyhedral wings were incorporated to provide a very stable design, which would be forgiving and easy to fly. Remember that this was before sailplane flying became popular and that I had never seen an R/C sailplane fly, only pictures in the magazines. Free-flight experience heavily influenced the layout, including the undercambered wing and short nose moment. It may be of interest that this was a completely Eastern design, as I was living in Connecticut at the time.

The Olympic has been a very popular and successful design and many sailplane enthusiasts caught their first thermal with this ship. When we considered a new design to replace the Olympic, we wanted to retain the easy handling qualities of the original, plus incorporate an easier building ship with better performance. We have learned a few things about sailplanes over the past nine years and feel that the Olympic II is a worthy successor to the original. If you liked the original ship, we know that you'll like the new one even more. If you are new to the sport, and want to get started with a large sailplane with competition potential, this ship is the way to go.

Primary design goals were to achieve a low sink rate with good penetration for gusty conditions, with a simple quick-building airframe. To provide the maximum opportunity to search for thermals, the design must gain maximum launch height and circle tightly in weak lift. Positive control response with hands-off stability was a must to allow the inexperienced flier to ride marginal lift. In addition, the structure should be rugged enough to survive poor landings and easily repairable in the event of poorer landings. Finally, and most important in our opinion, was that the design must be tolerant of errors in building and trimming and could be duplicated by the 'average' modeler. A skilled pilot can achieve excellent results with an average design; the average pilot needs an excellent design.

The design of any R/C sailplane begins with the wing, as this is the most important design element. Wing span, aspect ratio, planform, and airfoil are the primary factors which influence flight performance. The tail group provides stability and control, while the fuselage houses the radio equipment and ties everything together. We believe that the Standard Class provides the best trade-off between size and performance, especially when you consider cost of materials and the time to build the model. Thus, the wing span is established at just under 100 inches. For ease in transport and assembly, a two-piece wing is almost a necessity unless you own a van. With the span fixed, we can now examine the rest of the wing design.

While theory dictates that higher aspect ratios will provide greater theoretical effi-ciency, model airplanes don't read books. We think that wing area and higher Reynolds Numbers are more important in improving performance. One other factor is that lower aspect ratio wings can be built lighter for equivalent strength. We have found very little advantage in aspect ratios higher than 15:1, while 10:1 is the lower limit for anything resembling a full scale sailplane. We selected 11:1 because we wanted over 900 square inches of wing area..."

Quote: "Hi Steve - Here is Lee Renaud's Olympic II from the defunct Airtronics model company. This plan is a full size scan from an original kit. The model shown in the photo [see more pics 004] was built in 1980 and had a one hour 5 minute thermal flight a few weeks after completion. The model cast quite theshadow on the ground."

Update 12/06/2019: The rights for the Olympic II rest with Sky Bench Aerotech, see their site at http://www.skybench.com for more details. As of June 2019 Skybench (under new owner Scott Black) are hoping to have Olympic II kits available this summer. Scott asked us to add a link to his site here.

Quote: "Certainly, there is no problem with people scratch building Olympic II's. Is it possible for you to let people know the kit will again be available through Sky Bench? Thanks, Scott" 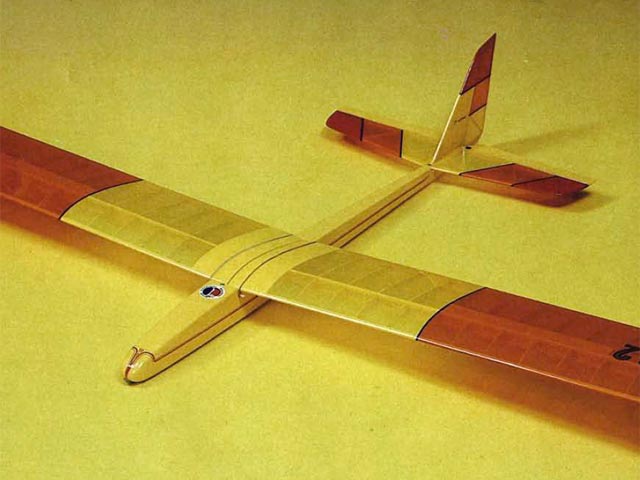 Hi Steve, The Olympic II in the picture is not stock. It's got a different tail and the front hatch isn't quite the same. The horizontal stab is supposed to be mounted on the fuselage, with an elevator. I'm not 100 percent sure, but I think the fixed part of the fin is smaller on the original design as well. Also, the box art is from the Olympic 99, which, although it looked similar from far off, was significantly different: different airfoil, weaker wing construction and joiner rods, stab with an airfoil which, I think, was rubber banded on. The fin and rudder looked different too. Here's a picture I found on the web of the box label, showing the original design: http://static.rcgroups.net/forums/attachments/6/3/2/1/2/a571808-240-oly_ii_label.jpg - If my first Oly II, which was almost stock, was still in one piece, I'd just take a picture of that and send it to you. It was a wonderful flyer as long as I didn't want to go fast, but a boneheaded error destroyed it, or at least damaged it more than I feel like fixing!
Lincoln - 09/12/2013
Thanks. Ok, have deleted the 99 box art pic, have moved the non-standard model to more pics [004] and changed the main model pic to show the right (original) model.
SteveWMD - 09/12/2013
Steve, The 1971 Airtronics Olympic 99 (kit number 900201) preceded the Olympic II (kit #900208)... which explains the "II" in the later kit's name. The 99 had an under-cambered NACA 6409 airfoil that required a little more skill to build. the Oly II simplified the wing with a flat-bottom airfoil, and made the model overall easier to build. Both are 99 inch span 'floaters' that will hang on the lightest lift.
Tim - 04/02/2014
Hi, I built one with a .15 engine, it flies very well.
Néstor Hugo Fiorini - 19/09/2019
I sent you photos of my Olympic 2 [pics 006-008]. Greetings and congratulations for the work you do.
Néstor Hugo Fiorini - 21/09/2019
Add a comment