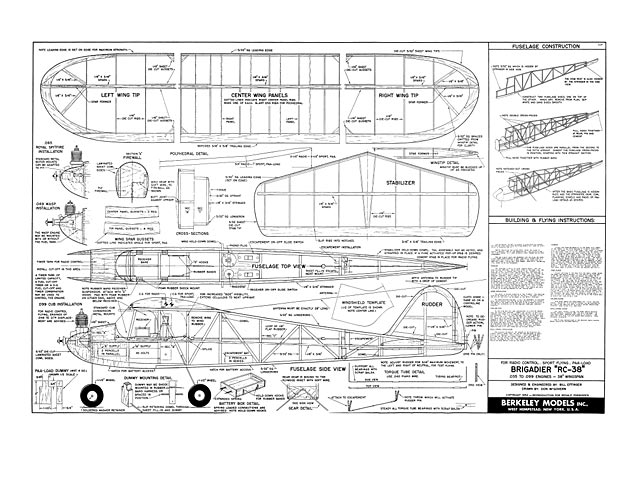 This was the only Berkeley kit I ever built, because of their terrible reputation for poor quality. The plans were beautifully drawn but the wood was awful, including the die-smushed ribs. Most people threw away the wood and just used the plans. I bought my kit as a left-over for something like $1.50, and I was determined to use the whole kit, even the crappy solid rubber wheels. Covered with Jap tissue and clear dope, it was light enough to use a Cox Pee Wee 020 instead of the recommended 049 engine. Mine was pretty much unsuccessful, with a pretty severe dutch roll, not easy to control with an escapement. The tiny rudder didn't help. If I built another one today, a larger fin and rudder would be the way to go. Fox bought what was left of the Berkeley operation when they went under and tried to sell their more popular kits, but was unable to overcome the Berkeley reputation. Sig scooped up the remains from Fox and re-designed some of their kits, including the famous Astro Hog, and did a better job than Berkeley. Most of the Berkeley designs were good, they just tried to do everything as cheaply as possible. You're better off building from the plans, like those in the know did back in the day.
DougSmith - 17/07/2015
Add a comment