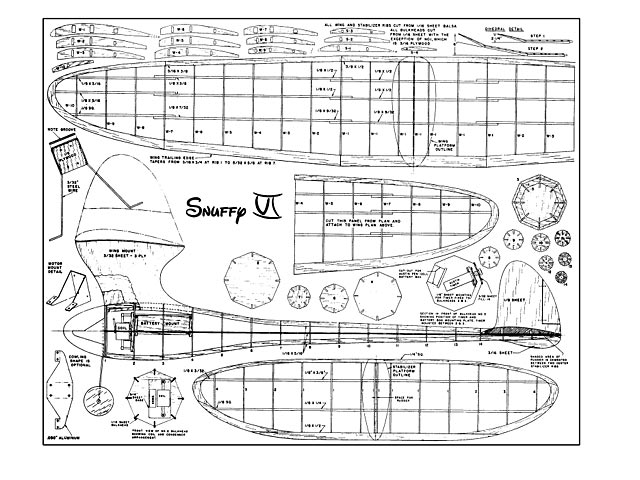 Quote: "There isn't a gas job that can outstep Snuffy! Five years' development makes it a high scorer. It's good for 1:20 on an 8-second motor run. Snuffy 6th, by Robert Toft.

THE Snuffy series, of which the model presented here is the sixth, was started in 1937. The distinguishing feature of all models in this series has been the 'pod and boom' fuselage construction. Snuffy II was built in 1938 and in three contests entered won two firsts and a third. The fourth, fifth, and sixth of this series were built in 1940. Snuffy IV was an Atom-powered model of about 190 square inches of wing area. Snuffy V was a fairly large Class C job powered with an Ohlsson 60. Although it had a fast climb and a very beautiful glide, a series of minor accidents, such as encounters with barbed-wire fences and telephone wires, prevented any real success with the plane.

Snuffy VI, as presented here, was finished in August, 1940. It showed early promise by placing third in a 'dawn' contest with an average of 2 minutes, 12 seconds. A fellow club member, Bill Bennett, built a Snuffy soon after and both his and the original were entered in the fall meet of the Minneapolis Model Aero Club. Bennett's model and the author's placed first and second respectively in Class A.

On June 16, 1941, the original model was entered in the Nationals eliminations of the Minneapolis Model Aero Club and on two flights of 4 minutes, 12 seconds, and 8 minutes and 15 seconds, placed first in Class A. The 8-minute flight was the original Snuffy's last, as it disappeared from sight and ended up in a farmer's yard about twenty miles south of the take-off point and was not located for over a month. It was found after the farmer had cut past it with his mower.

Bill Miller and several other Sioux Falls SD boys have built the Snuffy and have had good results with it. In a single day's flying Bill had flights of 10 and 13 minutes with it.

Although the Snuffy may seem large for Class A, it was designed around the Bantam engine. The Bantam, because of its high power and low weight, is especially suited to the model. Ohlsson 19 and 23 motors have been used with good success in the. model, and if an A and B combination is desired, these engines should be used. As an indication of its performance, the Snuffy would turn in flights of 1 minute, 15 seconds to 1 minute, 20 seconds on 7 and 8-second motor runs in dead air.

Construction: Before giving structural details of the Snuffy, a word about materials and workmanship. The original model was built of eight-pounds-per-cubic-foot Jasco balsa, and the use of this weight is recommended. If you build this model, spend a little time on it. Finish all parts carefully and you won't have to depend on the covering to hide sloppy workmanship.

The soundness of the general design and construction of the wing has been thoroughly proved by Carl Goldberg's gas models. A procedure for wing assembly that has proved satisfactory is as follows:

Update 7/4/2022: Replaced this plan with a res-caled version, wingspan is now 50 inch, thanks to Trevor, Bill. 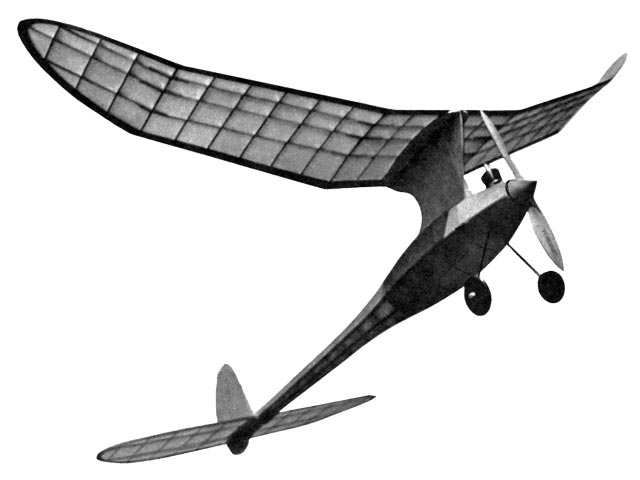 You quote the wingspan as 50 inches. But when I measure it 1/2 span is 19-1/2". Making it only 39" span which is what it says in Air Trails, March 1942.
Trevor Hughes - 06/04/2022
Trevor, I suspect you were measuring just the two outermost wing panels. There is a center section also and half of that plus the two panels comes out very close to 25" per panel. The supplement lists the wheels as 2" and I used that measurement for the basis of scaling.
Bill H - 06/04/2022
Interesting. Does it say 39 inch span somewhere in the article? I can't find that reference. Or indeed the 2 in wheel size, either.
SteveWMD - 07/04/2022
I apologise, by further measurements of wood sizes Yes indeed it does come out at 50" span but measuring the .pdf drawing it needs to be printed at 125% to get to the right size to build on.
So to make the plan right size it needs to be re-printed at 125% and then re-scanned into a pdf.
Unfortunately I do not have the facilities to do this or increase the .pdf by 125%.
Most print shops charge extra for enlarging files, but not for printing larger files except for the papers aditional size.
Trevor Hughes - 07/04/2022
Steve, the wheel measurement is in the Bill of Materials at the very end of the article, the last item under the Fuselage.
Bill H - 07/04/2022
Thanks. Got that now. The plan was at 300 dpi, so have rescaled by using a lower dpi setting of 240, then re-saving. That gives us +25% scale, and a wingspan of 50 inch, and 2 inch wheels. Seems right. Thanks all.
SteveWMD - 07/04/2022
Add a comment