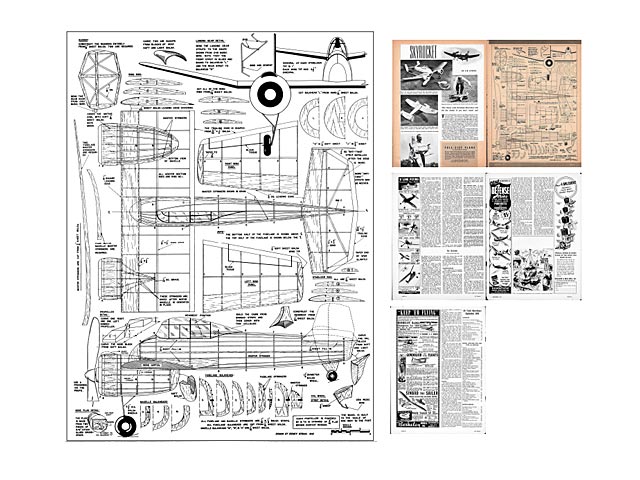 Quote: "This flying scale Grumman Skyrocket will hit the clouds if you don't watch out!

WE are presenting this month for our flying scale fans a most unusual model. The Grumman Skyrocket! Although performance figures are, of course, a military secret, the ship is believed to attain a top speed of at least 450 miles per hour, and climb in the neighborhood of 6,000 feet per minute - which is straight up! The cruising range of the Skyrocket is just as startling, It is more than 1,200 miles. Carrying two cannons and four heavy machine guns, the Skyrocket is just about the most heavily armed fighter in the world.

The model used by the navy employs two Wright Double Row Cyclone 14 engines, model Gr-2600-a5d, each developing 1,200 horsepower at 2,300 rpm at 8,000 feet. This engine makes 1,500 horsepower available for the take-off and for a five-minute-maximum engine-run time. The army version of the Grum-man Skyrocket will be powered by two inline Allisons.

Our model of the Skyrocket is built to the exact scale of 1 inch to 1 foot with but a slight variation in the dihedral of the wing and the lengthening of the lower portion of the rudders. The alteration was nec-essary on the rudders to provide an even line of thrust.

Although our model is a little larger than the average flying scale model, having a wingspan of 42 inches, nevertheless the flights are something to behold. As you can well imagine, the climb is terrific, due to the thrust of two 12-inch propellers. Torque is eliminated by having the propellers revolve in opposite directions, which is a great boost to stability. Flights are very stable, thanks to the general set-up of the plane. The scale stabilizer is of ample size, 30 percent of the wing area, and we made it more effective by using a lifting airfoil. Tip spillage is at a minimum at the stabilizer tips because of the twin rudders.

Construction used on the model is comparable to the strongest Wakefield entry and yet the weight of the finished model was only 5 ounces, dope and all. This is not up to weight rule, because there are 220 square inches in the wing.

After glancing at the plans you will note that although the ship is strong the construction is rather simple. However, the working time is increased over the average scale model by its size.

Hi Steve - Here is Sidney Struhl's Grumman Skyrocket from Air Trails magazine issue 09-41. Included all the text for this beauty from one of the old masters with several old advertisements. Scale is 1/12. 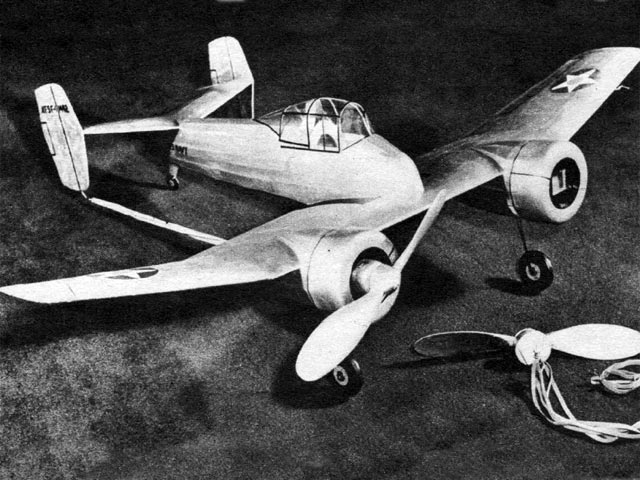