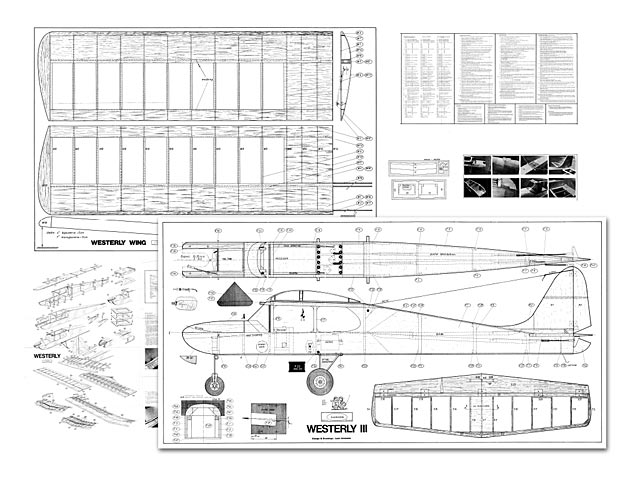 Quote: "Designed by Leon Janssens, it was kitted by his company Svenson, Don't know exactly which year, early 70's I guess. It's a standard trainer on rudder and elevator only. I've upgraded my 25-year old Westerly this year with an electric engine and ailerons. Works like a charm!"

Svenson kits have been around on and off for many years. Originally manufactured in Belgium, they have passed through several hands and are now being made in Spain by Ingenieria Metaloplastica J Bonet, SL.

My eight year old son Joshua wanted to learn to fly and so I was very pleased to have the chance to review the Svenson Westerly trainer kit, learning is less expensive that way. The latest version of the Westerly kit is fully pre-cut using CNC waterjets which give a very clean edge to the cuts, combined with accurate parts. Some of it still looked bandsawn or die cut to me.

WHAT'S IN THE BOX: The kit comes in a substantial box which looks very full, however there is an internal platform to reduce the volume of the standard size box, so that the parts don't float around.

All the parts are pre-cut, even the spar webs are cut to size. There are two bags of smaller wood parts, a bag of hardware plus three wheels and an undercarriage including a steerable nose leg. The hardware does not include control run snakes or even snap links; of this more later.

There is a long plastic cowl, which goes right back over the tank and under the windscreen. This is also a moulding and has the holes for the forward facing wing dowels ready cut out. There are two elastic bands for holding the wing down, although this is certainly not enough - six would be effective.

The plan is large and very clear, but with very little in the way of written information, but since reviewing the kit, a new set of highly detailed instructions have been produced and purchasers of the kit can obtain these by sending a SAE to the distributor (address given at the end of the review).

BUILDING THE MODEL: The plan lacks parts identification, in fact all parts have to be identified by comparison with the plan - not a problem to the experienced builder. The plan shows two wings, one with ailerons and one without and the instructions say that you can buy an aileron wing kit.

Having identified the parts, construction was started with the official owner of the model assisting, .Joshua took a great interest in the construction and applied glue to various fuselage parts as building progressed.

Initial criticisms aside, the kit is brilliant, the wood is no excellent quality and everything fits perfectly. The wings went together in about half an hour each and you only need a knife to cut the capstrips to length. The instructions suggest using a building board with a hinge in the middle to allow building both wings at once. A friend tells me that this used to be a Svenson trademark and it works, but you can also build one wing and add it to the second during construction.

The wing can be built completely on the board which should mean warp free structures and there is nothing complicated or tricky about them.

The fuselage took a couple of evenings and slots together very accurately. The doublers should be stuck down with contact adhesive, but slow Cyano could be used. One area that needs alteration is the engine mounting plate. This is 5 mm Liteply and it would appear that you are meant to screw the engine to it with self tapping screws, but I added some hardwood bearers underneath this plate. Even better would be a 1/8 paxolin plate. I would also suggest using nuts and bolts to hold the engine down. The manufacturer tells me that they now provide a plate of birch plywood.

There are a series of isometric drawings of the fuselage assembly sequence which will help the novice. The sequence is conventional - assemble sides, glue formers to one, fit second side, pull in at tail, fit top and bottom sheet etc. The fin and rudder are from sheet, while the tailplane is built. up over the plan with straight and diagonal ribs which prevent warps. The elevator is sheet.

INSTALLATION: The only information on the plan is a faint plan view of the servos and the snakes and a vague indication of the location of the Rx and battery, There is plenty of room for the radio, so . there needs to be no fiddling around trying to squeeze everything in, even though the servos are well down in the cabin area.

The hardware includes everything but the snakes and snaplinks. The plan shows two wire pushrods which are apparently unsupported, and which would cause serious problems to any novice who follows the plans. Unsupported wire pushrods will allow the elevators to blow back in a dive... no up elevator... oops. Fit good snakes, with the outers held firmly at both ends and supported in the middle.

The throttle and nose wheel can also be connected to the servos with snakes as this makes life easier when getting control runs past other bits of equipment.

The engine is mounted on that ply plate mentioned above, with side and clown thrust built in. The cowl is shown held down with rubber bands but I fitted some small wood blocks and screwed it down. I also screwed the windscreen in place because you have to take that off before removing the cowl.

The location for the fuel tank is shown as being down in the bottom of the fuselage, it should of course be right up level with the engine.

The wheels provided are light foam and you are advised not to leave the model standing on them during storage because they will get flats on them. The current instructions make the suggestion that if the CG is a bit too far back you can reverse the undercarriage. Under no circumstances should you do this as a rearward CG is going to make the model very unstable or even totally unflyable, move the balance point forward to match the plan.

The power range given on the box top is .15 to .36. This is not mentioned anywhere else and I chose to fit a .25 engine. To jump ahead, a .15 would be quite enough power for the model, while going to the top end would be a case of gross over powering. Possibly one might use a .36 for the aileron version, but it would be a real handful for the less experienced modeller.

To summarise though, the construction was fast, easy and it enjoyable.

READY TO FLY: I checked over the model, made sure that the CG was in the specified location, set the control throws to what my experience told me was about right - no, neither the plan or instructions mention this. The control throws that I set and which give good control without. being too sensitive are: 1/2 in each way on both rudder and elevator measured at the widest point on the trailing edge.

The wings are strapped on with elastic bands, the kit provides two, but I hope that the raw novice knows enough to fit a few more.

The first test flight was made from an abandoned concrete runway in a blustery breeze of about 12 mph. Take off was fast, dead straight and the model climbed out steadily, but I had to feed in full down trim to correct a strong desire to climb. I put this down to the .25 engine and flat bottomed wing.

The model was quite fast and very stable, but it could be slowed down. I flew it round and could find no nasty habits -a very, forgiving model. I tested the stability by putting the Westerly into a turn and releasing the sticks. The model did return to straight and level, but not as fast as I would have expected.

Joshua had previously experienced only one go on the sticks of my cameraplane which is another docile model. I was a bit worried about the breeze, but decided to let him have a go, after all it is his model.

Once it was in the air, I handed the transmitter over and Joshua was able to fly for almost a full tankful and I only had to take over briefly a couple of times, which speaks highly of the model's qualities as a trainer. I took over for the landing and found the approach and touch down to be simple - it almost lands itself, with just a touch of up to flair out.

I later replaced the 25 engine with an old Enya .15 and flew the model in a stiff breeze. The engine was quite powerful
enough and gave the model a reasonable rate of climb.

CONCLUSIONS: This is an excellent trainer, easy to build, no difficult bits and everything fits perfectly, but it would be a good idea if the complete beginner has an experienced builder to guide him, especially for the final inspection and first few flights.

Flight performance is excellent. If an eight year old can make his first real flight with a minimum of help, it has to be good.

If you get one with the single A3 (4 page) size instruction sheet, you can send an AS size SAE to the distributor and you will get a copy of the new step-by-step instructions." 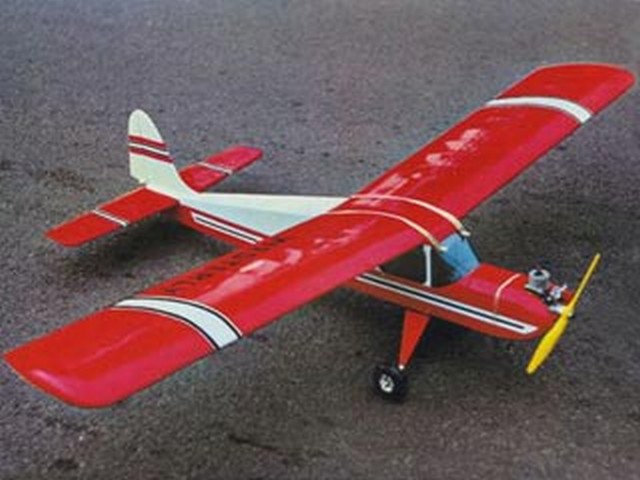