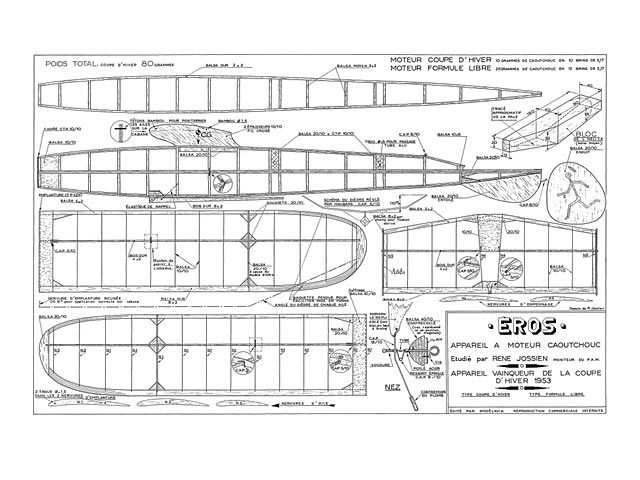 Quote: "Hi Steve, Here is the plan of the Eros, a Coupe d'Hiver designed by René Jossien (King René as the British used to call him). René won the 1953 Coupe d'Hiver with this model. I found the plan on the French Retroplane forum, uploaded by the member BEDE (Bernard), a well knowned vintage model lover. René Jossien designed a large number of reknowned and efficient models. He has been Champion of France a number of times in various categories, a relentless contributor to French magazines such as MRA and Modèle Magazine and to various newsletters such as Aéromodèles, Vol Libre and 4A. René Jossien was a great modeler, a prime example in the post world war II era. French FF aeromodelers as a whole owe a debt of gratitude to his commitment to the cause of aeromodelling, both ancient and modern, promoting it, working hard against difficult odds, supporting, stimulating, asking for funds, knocking at departments, offices, TV. Cheers,"