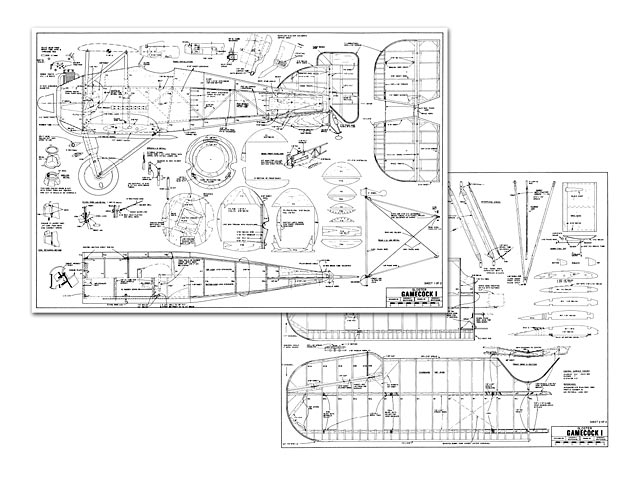 Quote: "The Gloster Gamecock is one of the finest sport scale aircraft ever presented by RCM. Combine that fact with two wings for the biplane fan and you have a .60 to .80 powered machine that is hard to resist. The author's prototype, pictured here, was a real crowd pleaser at the 1974 and 1975 British Nationals.

I built my first Gloster Gamecock model back in 1967. It was my first attempt at FUG Scale, was Elfin 1.49 powered, 36 in span and steered by single channel radio. Once trimmed out, she was a great fun flyer and made me thereafter want to build a full-house job. Weil, it took me until 1973 to screw up the cour-age to design her, and early in 1974, I commenced construction, to finish just in time for the British Nats. The ship was a great crowd-puller at both the 1974 and 1975 Nats, where she finished 6th in Class II (Stand-Off) Scale on each occasion. In 1975, she was 2nd on static points behind Pete Neate's DH2, and attained the highest flying points of all biplanes in the event, despite strong, blustery winds.

Harry Folland, Gloster's chief designer of the 20's, certainly had an eye for style - he was responsible for the SE5a and Gladiator designs, and his name is perpetuated in the Folland Gnat, as flown by the RAF Red Arrows Aerobatic team. The stocky, purposeful lines of the ship, combined with the brilliant and colorful squadron markings of the period, produce an air of extrovert gaiety equalled by very few other aircraft. Developed from the Grebe, the Gamecock served with numbers 3, 17, 23, 32 and 43 squadrons, and saw front line RAF service from 1926 to 1931.

Profile No. 33 shows the wide choice of markings, my ship representing that of the then Sqn. Ldr. R. Collishaw, C.O. of 23 Sqn, The shape of the ship is the result of much effort, and I re-drew all the outlines twice before I was satisfied with them - photos often display significant differences from published 3-views!

Most written accounts of the Gamecock highlight the handling characteristics of the ship; she was highly aerobatic, tricky in a spin, and she suffered from wing flutter at high speed! The latter two characteristics are enough to put anyone off making a model Gamecock, but no problems have been encountered. First, model structures are inherently stronger than the full-size, so minimizing the flutter problem. Second, the model displays a marked reluctance to spin; even so, I've never let one develop just to be on the safe side!

The Gamecock represented a turning point in fighter design. She was the last all-wood RAF fighter, and the first with sufficient power to do a 360 degree upward roll and still have enough steam left to be pushed over the top. In her time, she was the RAF's premier aerobatic ship, and featured at many air
pageants and shows, piloted by such men as the then Pilot Officer Douglas Bader (who was in 23 Sqn at the time, incidentally).

However, that's enough about the full-size. I hope that I've whetted your appetite. I found that reading about the Gamecock is habit-forming, so unless you really want a 5' span, highly colored, crowd-pulling, excitingly aerobatic scale biplane, turn to another article quickly!

Construction. General: The structure is quite straight-forward, and most of the finer points are detailed on the drawings. Although the model is only recommended for the more experienced builder and flier, any scale fan will want to start building the relatively more complex subjects eventually, so I intend to cover the subject pretty comprehensively. The majority of the woodwork was stuck together with PVA white glue, but 5-minute and 24-hour epoxy were used, as was contact glue.

Wings: Build both sets of wings first, as they will be needed to aid fuselage building. Study the drawings and cut out all the parts first construction is much less of a chore when you make yourself a pre-cut kit. Pre-assemble all the laminated parts at this stage. The lower spars are pinned down with 1/8 in packing underneath, together with the TE. Ribs are glued in place, followed by LE, riblets, top spars, aileron spars, aileron ribs and tips. The 1/32 ply spar webs and the Warren-type bracing are important... " 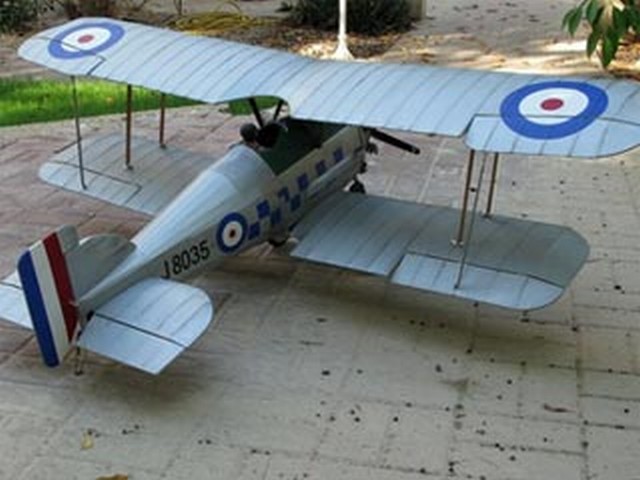