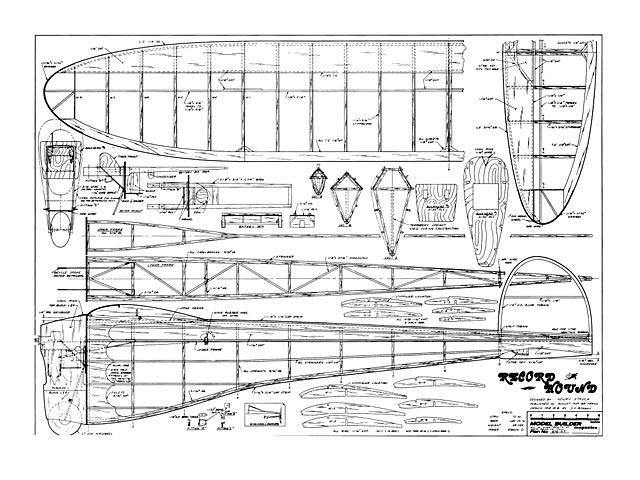 The Record Hound (oz24) was first published in August 1939 Air Trails. This here is a later redrawn plan from MB 1976.

Though not as well known as some of the more popular Struck designs, the 'Record Hound' had an unusually business-like appearance and incorporated many new ideas in design and construction techniques. Being true to its name, it set a 1939 NAA (before AMA was established) record with a three-flight average of 5:41, and this in relatively dead, mid-winter Eastern air.

The Record Hound was published in the August 1939 issue of Air Trails, from which our plans were drawn. Construction of the flying surfaces is pretty conventional except for the rib stiffeners - not caps as we use today, but rather, strips of 1/16 x 3/16 glued perpendicularly along the side of each 1/16 sheet rib.

Without the four-step isometric drawings in the article, you may need help on the fuselage. The upper and lower frames are built first, over the plans. (Note that longerons overhang front crosspieces by 3/32 of an inch). The upper frame is then removed and moun-ted over the lower frame, using tem-porary spacers to maintain correct height while the uprights are installed. Next add the plywood firewall bulkhead. Now soak the bottom longeron in water and then run it over a soldering iron or other hot metal until you have the approxi-mate side-view shape. Mount the longeron by gluing to the firewalt and fitting temporary vertical braces. Cut actual uprights to approximate length, glue in place against the corners of the longeron, and trim off bottoms when dry. Now cover the upper frame sides with 1/16 sheet. Finally, a 3/16 x 3/4 soft balsa cap strip is added to the bottom, side stringers of 1/8 x 1/4 are glued on, and miscellaneous fillets are added.

For once, we're not going to say that the O.T. Model of the Month will make a good R/C model - it just ain't the type!" 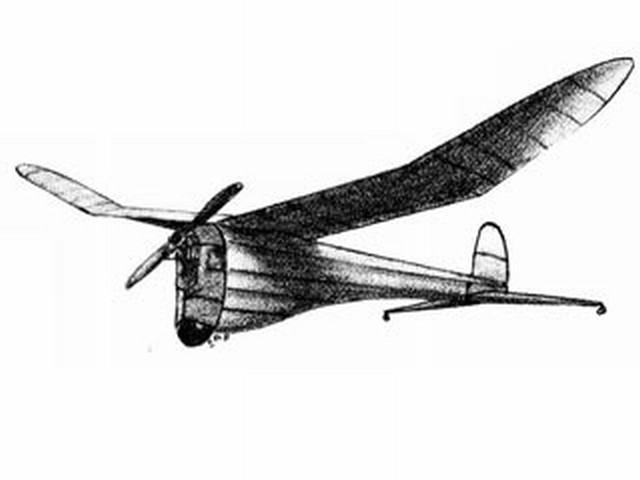