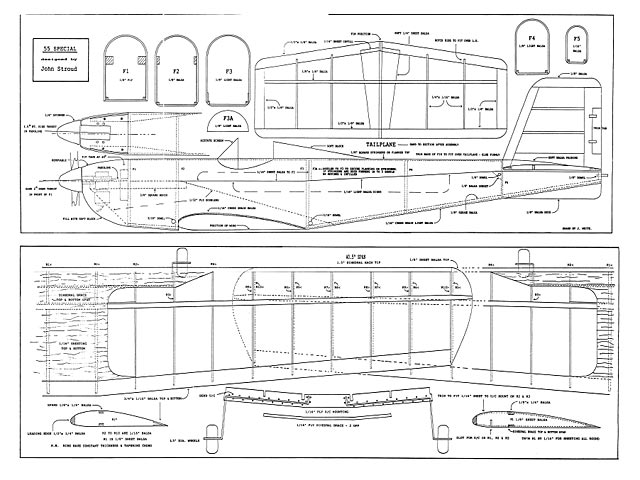 Quote: "55 Special, by John Stroud. Built by Don Knight and designed by the editor specially for the new PAW 55BR.

Your editor is better known in aeromodelling circles as a control enthusiast (pun intended) than for free flight, so I was surprised when he designed the 55 Special and asked me to build it. He wanted a good looking, low wing model with semi-scale appearance to be powered by the new PAW 55. He also decided to try to avoid the excessive dihedral that many sport low wingers have. Ah, I hear you say, what about stability? Well, the aim was not for a model that can be flown in a gale but for calmer conditions on low power. I'm sure most of us remember evenings when the wind has dropped, flying a model that climbs in gentle circles and changes to a slow flat glide when the power cuts. That is the sort of thing that the 55 Special is aimed at. Having said that, the model does have reasonable stability and can cope with less than perfect conditions mainly due to the aerodynamics of the constant thickness wing. Let me explain.

The wing design: If you plot airflow over the wing from root to tip you will find that the path becomes angled outwards as it gets towards the tip. because air tends to slip off the outboard edge. This gives the airflow a longer path than if it went straight from the LE to the TE as it does at the centre of the wing, making the wing effectively a thinner section at the tip and thin sections tend to stall before thick. The deadly tip stall. Now to the clever bit of the design. If the wing has a constant thickness as the chord tapers towards the tip, the airflow is presented with a short, comparatively, thick section that will stall later despite the diagonal path taken by the airflow. This will avoid tip stall and aid stability. Other ways to overcome tip stall are wingtip plates, which don't look very nice, or the more common washout, which affects the efficiency of the wing. In practice the theory seems to work as the model has reasonable stability taking into account the low dihedral.

Construction: After all that, lets get down to some building starting with the fuselage. Cut the sides from medium hard 1/16 sheet balsa with the 1/32 ply doublers glued to the front. As these extend to behind the wing they add great strength. The tapered engine bearers are glued to the ply doublers and the motor mounting plate of ally or paxolin is screwed on top of them with small wood screws. After the formers have been glued in the top deck can be added. Note that as the sides are parallel from the firewall to behind the cockpit, you can cover it with one piece of sheet or plank it with 1/4 strips. Behind the cockpit you can either use stringers or sheet. Add a bit of sheet strengthening where the front tailplane dowel goes through the fuselage.

The engine cowl is simple and effective. The sides are from 3/16 sheet glued to the bearers and the detachable top has a semicircular former at the back with an inverted U-shaped former at the rear with planking between. The slot in the U slips down over the crankshaft of the inverted engine. Make sure the front of the cowling is a snug fit with the 1-1/2 spinner at the front.

Inverted engines: Some people find inverted engines a bit of a trouble to start, but if you mount the F/F tank at about 45 degrees you can turn the model through 90 degrees to start it as a sidewinder..." 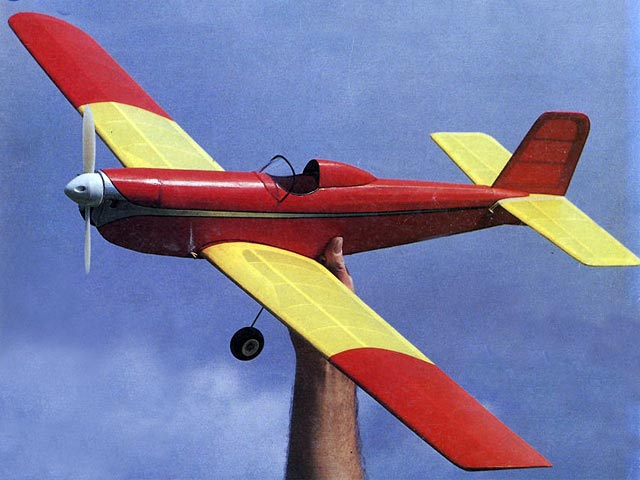