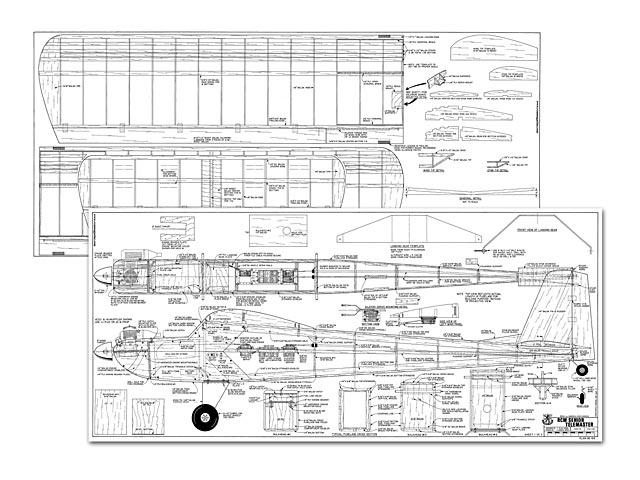 Note the original Senior Telemaster (oz9275) first appeared in 1970. This is the design as published in RCM later.

Quote: "First produced as a kit in Germany, only a few were exported to the US before the kit was discontinued. Reviewed in the April 1973 issue, the Senior Telemaster has become one of the most popular and sought-after designs in the country. RCM was fortunate to secure the publication rights to Alexander Engel's mangificent 95in span aircraft. A few minor modifications have been made to improve the structural integrity of the model, although little could be done to improve the outstanding flying characteristics of this magnificent aircraft.

No doubt about it, you're about to be the proud pilot of one of the biggest model airplanes on the block! First you get yourself a balsa tree - or forest? It sure takes a lot of sticks. This isn't the ideal plane to build in an apartment closet. The plans alone are big enough to paper an average outhouse twice over. You'll find out for yourself as you unfold them!

While the new version of the Sr Telemaster looks like the original machine once kilted in Germany, the new one boasts some design changes. The changes were made both to simplify the construction and to offer a stronger airframe. The barn door ailerons have been changed to strip ailerons, They're easier to build and set up and they offer a stronger wing trailing edge. Heavy spars, full length 1/2 x 3/16 in strips running along the front of the wing, a 1/4 in ply spar dihedral brace coupled with a 1/8 ply leading and trailing edge dihedral braces add up to a wing that's almost strong enough to make a diving board for the local swimming hole! A dorsal fin has been added to the vertical fin for strength. The stabilizer has been re-designed to make it more twist resistant and the fuselage construction has been changed to make the building easier and the airframe stronger.

This new ship will fly just like the one Chuck Cunningham has mentioned a few times in his column in RCM: The airplane that I was flying yesterday and have been flying for the past several months is one that I have mentioned before. It is the fantastic Senior Telemaster, a German kit that is no longer in production. I sincerely hope that either the kit can be started up again in Germany or someone in this country can get the kit rights to it and produce it here. Well, Chuck, you can stop lending out your plans, here comes the 'fantastic Senior Telemaster,' one more time.

As far as the construction on the new version goes, we're sure you'll agree that it's simple. Not a lot of little pieces to be glued in place here and there. The plane takes a while to build though, because there
are a lot of big pieces to be glued together. To make the construction notes easy to follow, the first time a part is used, the name of the piece is given in italics. The star (*) is used to indicate that we've said all we're going to say about installing a particular piece and it's time to get out the glue.

In this article we've included a list of the additional materials you'll need to get the plane built. When it comes to finishing the plane, any of the possible covering techniques may be used, including MonoKote. That's what we used to cover ours. Incidently, if you want to cover the plane with one color and don't mind a few patches, you can get by with 3 rolls of the stuff. For two colors it will take 4 rolls; 3 rolls for the wing and 1 roll for the fuselage! Gad, that's enough to cover 4 x half A's, 2 x .19 sized ships - ah well, just think about how beautiful it will be up there. With a little headwind, you'll be able to hold it still in the sky above you to shade you, your family, and your car!

Now it's time to get started. Move out the living room furniture, roll back the rug, lay down your building board and plans, get out your balsa forest, bucket of glue, and here we go.

THE WINGS: To make the building go more quickly, both of the wing panels are shown on the plans so you can build them both at the same time. In looking at the plans you'll find that the root rib and ribs #2 and #3 are in two pieces. They have been designed this way because of the 1/4 in ply dihedral brace. When you glue these two piece ribs in place on the first wing panel use the 1/4 in ply dihedral brace as a spacer to set them up. When you glue the ribs onto the second wing panel you'll glue the dihedral braces in place while gluing in the ribs..."

Quote (from 1973 review): "The all-up weight of the model was slightly under 6 lbs which gave us approximately an 8-1/2oz wing loading! From that point on things began to happen! We can say, unequivocally, that the Senior Telemaster is one of the most enjoyable aircraft we have ever flown. The ailerons, when used alone, are relatively ineffective on that huge wing, and thus the Telemaster required coordinated turns using both rudder and ailerons in conjunction with the elevator.

The take-off run with a .60 is approximately three feet, and from then on in the Senior Telemaster flies like a full size light plane. It is capable of doing most of the maneuvers and could carry any type of payload you wanted to include, such as a movie or still camera and the like. And, no matter where the Telemaster was taken, it was an instant hit! One modeler at a local flying field went to sleep under the starboard wing since it was the only shade available, while other modelers complained that a low pass by the Telemaster created a dark shadow on the flying field and made their spot landings difficult to observe. After a while the reactions of the modelers at any field could be predicted. The first comment would be:'You've got to be kidding! followed by a short and somewhat sarcastic chuckle. After a demonstration flight, their reaction changed to: Where can I get one?"

Article pages, text and pics.
RCM review (from 1973) thanks to Tenbars.
Review from MB. 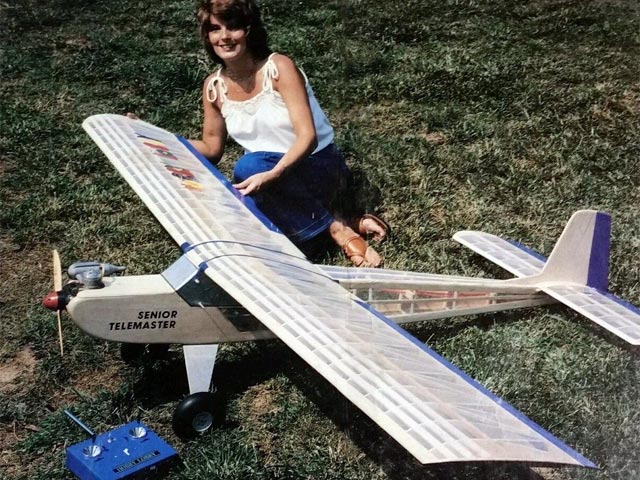 I've flown several of these over the years and it's true, nothing flies like a Telemaster. The original German kit became unavailable when the Germans were unable to get the wide 48" balsa sheeting for the wing. Hobby Lobby (now Hobby Express) arranged to have the kit made in the USA instead, and this is the version in the RCM plan. They substituted thin strips for the leading edge sheet and just left the trailing edge out, using strip ailerons instead of barn doors. But it still flies like a Telemaster. It will take off (and land) crossways to the runway, and you need to do this in a stiff wind or it will get blown over in anything more than a gentle breeze. It will teach you how to use the rudder to co-ordinate your turns just like in a Cub, and you'll learn how to keep one wing down in a crosswind takeoff. Side slips are a lot of fun because the Telemaster is the perfect plane for one wheel landings. I flew one of the ARF versions covered with some kind of LizardKote, not the real thing, which wasn't stiff enough and the whole wing fluttered when I got it too fast, which it will do with any 60 engine. I suggest wing covering with MonoKote only, not the softer stuff for added stiffness. Go ahead and try one, you can't go wrong, electric is no problem either.
DougSmith - 05/07/2015
Photo of my Senior Telemaster, which I built in 2017 [more pics 006]. Overpowered with an OS 70 Surpass.
RobR - 04/10/2017
This is my Senior Telemaster from RCM plans [more pics 007, 008]. It flies extremely well on an OS 91 FS.
TomComo - 26/04/2018
Sr. Telemaster [more pics 009-012]. Rebuilt by me in the late '70s. Powered by a K&B .61 with a special muffler of my own design, it is a superb flyer. With the flaps extended it will fly very slowly. Running a 12" x 4' Top Flite prop the climb is spirited, to say the very least. I covered the model in red Super Monokote with the white cross of Switzerland on the tail winch allowed me to use HB-PDP as the license number. PDP stands for "Perry Directional Porting" which was a power enhancing modification for cross scavenged two stroke engines. I'm afraid that PDP is lost in history.
JeffBreece - 03/08/2018
Add a comment