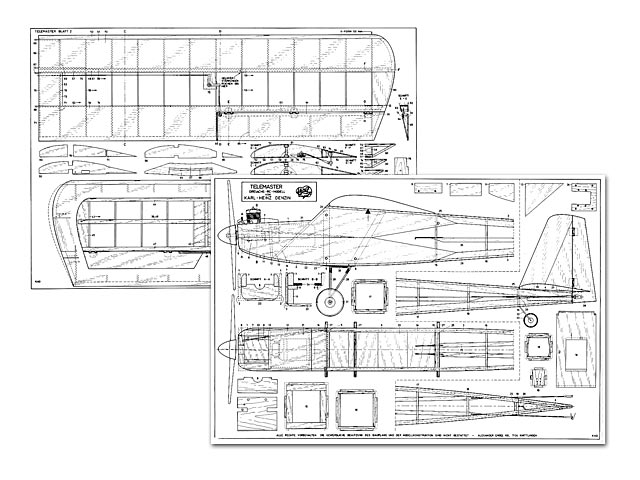 This document shows the plans, sheet 1 and 2 on one page each, a translation of the German building instructions and bill of material, as well as scanned copies of their originals.

The 'Telemaster', without a Senior or Junior prefix and without a 40 suffix, must have been the first, the 'original' Telemaster. It was designed by Karl-Heinz Denzin, as evidenced by his name in the plan's title box and his initials on each plan sheet. Denzin (1922 - 2009) was a very well-known German designer, who in 1967 and 1968 worked for the Alexander Engel KG, where he obviously did nothing worth mentioning but design the Telernaster. (The KG designates the legal form of the company, a limited partnership, but obviously not with Denzin.)

Alexander Engel ran his own model business (boats and airplanes), manufacturing kits, balsa wood, accessories, and sometimes even engines. Denzin worked as an employee for about two years, and after he had designed the original Telemaster (6 ft wingspan), obviously someone else scaled it up and down giving the well-known Senior (8 ft wingspan) and Junior (4 ft wingspan) Telemasters. From now on, Engel successfully produced and sold these '3 Telemasters' in Germany, Europe, and later (1973) even in the USA (via Hobby Lobby). Even later (1975), for some reasons Hobby Lobby had the models redesigned and produced by the well-known Joe Bridi.

The 1973 Engel catalog has a whole page for the 3 Telemasters. Correctly, Denzin is mentioned as the designer of the standard Telemaster only. There is no designer named for the Senior and Junior. Accordingly, its foremost Karl-Heinz Denzin and only then the Alexander Engel KG who wish us "always happy landings" at the end of the Telernaster building instructions. On the other hand, these wishes come only from the Alexander Engel KG at the end of the Senior Telemaster building instruc- tions.

These instructions should be self-explanatory, but there is one interesting point: It is recommended for both models to cover them entirely with the special Engel Nylon fabric. That isn't modern Mylar film but should be just as puncture-proof. It has to be doped, but the special Engel Nylon and dope qualities were made to need only three coats. So the covering might come close to film even though it needs more work and money. It was just the high-quality solution in its time.

Surprisingly, in case of Telemaster the Nylon had to be purchased in addition to the kit while it was included in the Senior Telernaster kit. With the wheels it was the other way around.

Many thanks go to Brad Nichols for providing all the plans, instructions, and useful advice on all types of Telemasters. Blame me for any errors and misunderstandings. Dec. 2011, Burkhard Erdlenbruch"

Note: I have scaled these plans up as best I can from small A4 sized prints, so the quality is not great, the resolution is poor. If anyone has a better scan of these original drawings, I'd love to see them. Steve. 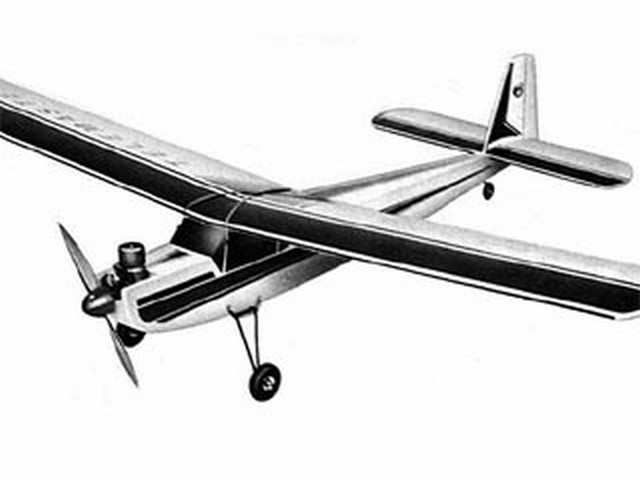