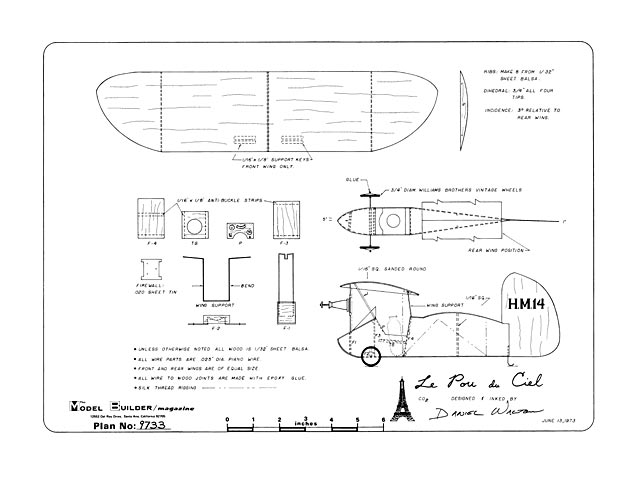 The novel creation of a French carpenter, Le Pou de Ciel (means Sky Louse, but popularly known as the Flying Flea.) was intended as a home-built to put anyone with $500 into the air. Among some of the unusual features incorporated into the design were one-piece wings in a tandem arrangement, no elevator or ailerons, and a huge flying rudder. The wing was pivoted for pitch control, while the rudder and unusual curved dihedral functioned in place of ailerons. All in all a simple and unique approach to the homebuilt aircraft. Indeed, Henri Mignet's philosophy behind his creation was: If you can nail together a packing case you can construct an airplane.

The model described was decided upon because it of away to pack as much wing area as possible into a 13-inch wingspan. Since no 3-views were available at the time of construction, it was decided to make the project a fun-type airplane. Another dividend is the superbly adequate ventilation for the engine and tank.

The plane shown in the plans differs from the original in only two major as-pects. The firewall has been changed in design to give more support. Secondly, the amount of incidence in the front wing has been changed from five to three degrees. The original required considerable nose weight to obtain a proper glide. The reduction in incidence along with the use of light wood should elim-inate this need.

CONSTRUCTION: Mr Bill Hannan and Mr Walt Mooney have presented articles on the construction of all sheet models in the past issues and a rewrite will not be attempted. Only a couple of minor points shall be discussed here. First, all piano wire-to-wood joints are accomplished with epoxy cement. These include former sandwiches and wire-to-wing support keys. Note it is also easier to first align the front wing once the fuselage and rear wing assemblies are complete, and then glue on support keys accordingly. Also, the firewall is .020 inch sheet tin stock, the ears bent around the support at F1 and silver-soldered in place. Finally, a rubber shock mount is made from six layers of an old toy balloon glued together with rubber cement. This is cut to fit snugly between the engine and the front of the firewall. Remove any unnecessary excess which might show or catch dirt.

Two props have been tried on this model so far and both work. The Williams Brothers prop, shaved down to a 4-inch diameter, gives a somewhat better performance.

FLYING: This model is an exceptionally easy plane to trim and fly. Start by test gliding the model over the proverbial tall grass, on a calm day. If the model shows a further need for nose weight, remove the top sheeting from the area forward..." 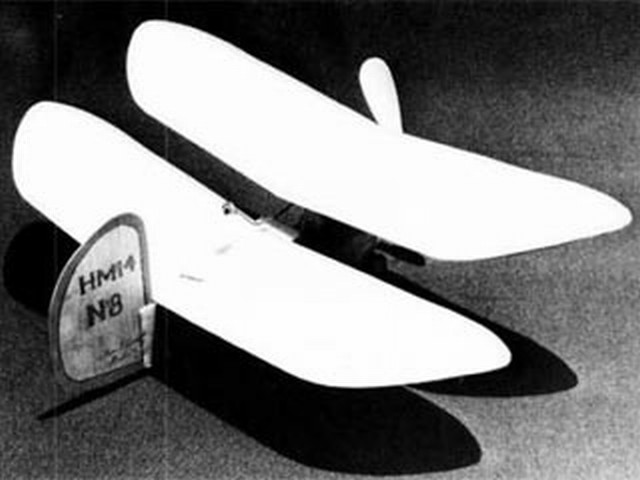