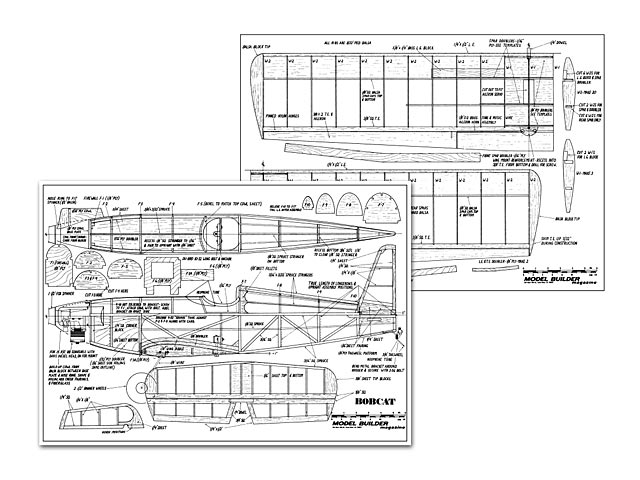 Here's something that will provide spry aerobatics or easy cruising, and with the quiet purr of a diesel engine, you don't have to leave town to fly it. Bobcat, by Bob Benjamin

HISTORY AND DESIGN PHILOSOPHY: A bobcat is generally recognized to be a smallish member of the cat family, known for a short tail and a high degree of maneuverability. Bobcats are also good looking creatures, but are not nice to be around if you happen to be a rabbit or something like that. Our Bobcat shares all the good attributes of the furry kind, with the extra advantage of being very well mannered toward model builders. The airplane is actually the current product of a design evolution reaching far back into the dim, distant days of single channel pulse. Half a dozen airplanes, ranging from .09 to 45 size, have made a contribution to the airplane presented here.

The Bobcat is not an ultimate anything; considering the degree of subjectivity of modelers' opinion and the vast range of difference in skill level of people who build and fly R/C model airplanes, I doubt that any single design could ever be that. The airplane is my best effort to date at producing a small model with enough aerobatic capability to be challenging to fly, but with enough positive stability to allow the pilot to relax at a reduced power setting and just fly lazy circles in the sky. Although short-coupled, it will not fall out of the air and bite if slowed down or pulled up tight, and this docile nature combined with the quiet, non-irritating sound of the diesel engine around which it is designed, makes it an ideal airplane for close-in, schoolyard flying.

It is not a trainer, though. The Bobcat is a very clean machine and will eat up the whole field on landing if you haven't made an effort to slow it down during the approach. You can't just chop the power and dive for the strip. Moreover, it is a quick little critter, and will rapidly get ahead of a novice flyer.

It is also a design for those of you who enjoy model building. I happen to love good ol' former and stringer construction, and conjured up this airplane to provide a combination of the interesting flight characteristics described and a little building challenge, too. In short, if you have a season or two of successful flying under your belt and feel comfortable with a fast low wing sport ship, and if you like to do more than just join up the fuselage sides and stick the tail feathers in place, the Bobcat is for you.

Right now some of you are probably asking yourselves: How come he put a DIESEL in that thing? Actually, I did that for several good reasons, all of which apply to you, too. There has been a lot of information tossed around on diesels over the years, and not all of it has been accurate. To be specific, we are concerned here with Davis Diesel Development's diesel head conversions for existing production glow engines. The long and short of it is that they work as advertised. I'll say more about operating the Davis conversions at the end of the article. For now, suffice to say that they are no more difficult to run than two-stroke glow engines, once you learn the differences. They can generally be described as performing extremely well at low and medium speeds, on larger props than would be considered normal for equivalent size glow engines. For several reasons, they are markedly quieter than two-stroke glow jobs, and in most cases will get at least double the running time of a glow on the same volume of fuel. Diesel fuel is readily available by mail order and can be stored just as well as glow juice with reasonable care. In short, they are an excellent choice for the modeler looking for a power-plant for a trainee sport model, aerobatic (including competitive aerobatic) airplane, or scale model.

The scale folks especially need to take a good look at the ability of diesels to swing big, long props at effective RPM's, without straining or over-heating. Diesels also happen to be very tolerant of exhaust back pressure, and just don't mind at all if you stick a long muffler extension on them. Add to all this, of course, the com-plete freedom from concern with glow plugs, batteries, and connectors. Nothing is the perfect answer to all problems, but diesel conversions will solve a lot of them.

One point is worth elaborating on. I mentioned low and medium speeds. This does not mean that diesel powered airplanes won't go fast. A little experimentation with propeller selection will result in great reward to the diligent. The correct combination of diameter and pitch on an engine that is happy with a lot of prop ahead of it can make your airplane go like greased scat. In short,. they don't haw to scream to go fast.

Several anecdotes from the early days of the Bobcat's life in public will illustrate some of what I'm talking about. l take care to give my engines proper break-in, and had put about an hour of bench time on the Davis/Fox combination before putting it in the airplane and then spent another half hour setting up the servo throw, idle adjustments, etc. In other words, no more than any careful modeler would expect to spend getting an engine ready for flight number one. The airplane had had several flights with the engine running at conservative settings 'in private' before being brought out into the cold light of public scrutiny. With a total of no more than two dozen starts and a little over two hours' running lime, I flew the Bobcat six times for a group of fellow dub members. Four of the starts were on the first flip. That's by hand. I don't use a starter. The other two starts were complete within thirty seconds.

On the same weekend I had occasion to meet Al Alman at the Puget Sound ROC's field, having promised to bring out the new machine for him to see. If you read Al's words of wisdom regularly, you already know that he is aware of the fine qualities of Davis's diesel goodies, but that he looks upon small airplanes with a jaundiced eye. Al asked me to tell you that he actually stepped down from his position as guru of the Big Birds and admitted that he had finally seen a small model that flew in a manner of which he approved. This made me feel good, because Al has seen a lot of planes made by a lot of capable designers, and he agreed with me that the Bobcat is a smooth little beast that looks, and flies, like an airplane.

The following weekend I had the Bobcat in the car when I stopped to watch the fun at the ROC's four-stroke meet for a while before going to my own club field to do some more test flying. Several of the guys running the meet saw the airplane in the car and asked me to bring it out, even though it wasn't a four-stroke, and give a demo. While I was flying, my friend Emil (Ikon N'West) Neely walked over and ended up being given first 'turnsies' on the airplane. The result of that was that Emil and I sat up until a late hour at my place, discussing Ikon's bringing out a larger version of the Bobcat, probably 70 to 80 inch span, as a kit. There will probably be a shoulder wing offshoot as well.

Perhaps all this testimonial sounds too good to be true, but it is all for real, and just makes me feel extremely good, because I have put a lot of thought into developing this combination of airplane and engine to the point that it will do all these good things for you, too. So, if you have had a little building and flying ex-perience and want a neat model that looks and flies like an airplane, and that will show off all your building skills, read on.

CONSTRUCTION: You have to build this one. Basically. the approach is good old rubber job stick-and-former, with a little plywood and sheet thrown in where it will do some good. DO NOT start adding blocks and braces, there is plenty strength... 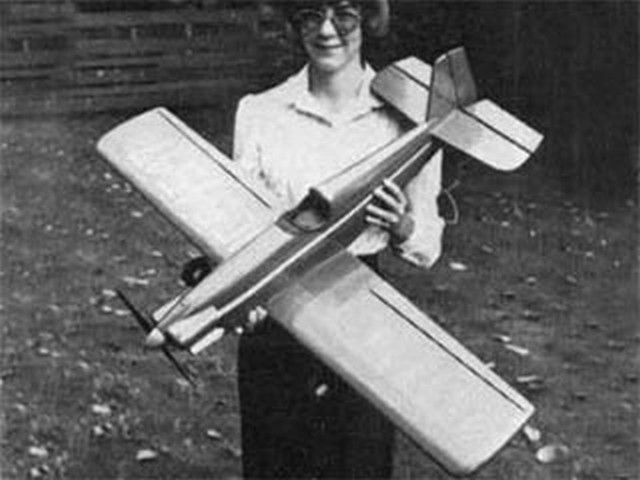 Hi Mary and Steve, Attached is the article for Bob Benjamin’s “Bobcat”, a really great flying airplane. In this time of uncertainty and the COVID-19 pandemic, please take care of yourselves and stay healthy and safe. Keep up the great work on Outerzone. Best to you both,
rocketpilot - 26/03/2020
Add a comment