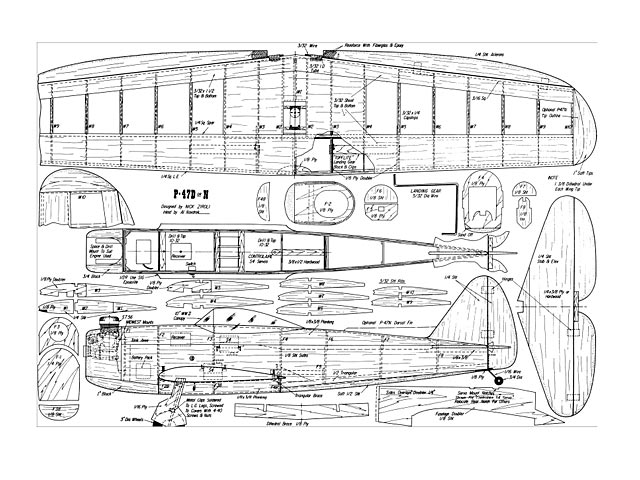 Quote: "The all round versatility of the P-47 made it among the better known fighters of WWII. It was a heavyweight with the distinction of being the heaviest single engined fighter of the war. In spite of this, it's performance was quite outstanding. A 2,000 hp Pratt Whitney twin row radial engine with a turbo charger gave it a top speed of 420 mph and a ceiling of over 40,000 feet. As a tactical bomber it could carry an impossible load of bombs for it's day. As many as three external auxiliary fuel tanks could be carried to increase the range for bomber escort missions. One of the Jugs, as it was nicknamed, distinguishing marks was it's great firepower. Eight 50 caliber machine guns, stagger mounted in the wings. Four in each panel.By the end of the war, over fifteen thousand P-47's had been built.

As a model, the P-47 is outstanding. Though by no means exact scale; the features of the old Jug are definitely there. Performance, as always, is the primary consideration. Simplicity of construction runs a close second. This one has both these desirable features. In the performance department, it leaves little to be desired as an acrobatic sport model. The model shown weighs 5lb 2oz ready to go except for fuel. A Merco .49 was used for power and makes the model the potent machine it's full size counterpart was. A .49 may seem like a lot of power... " 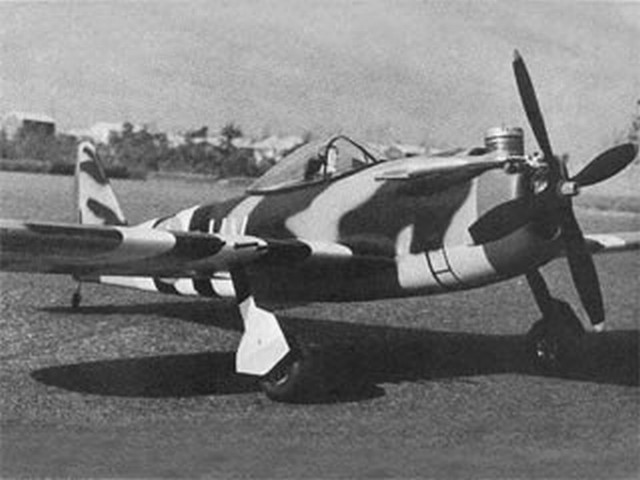