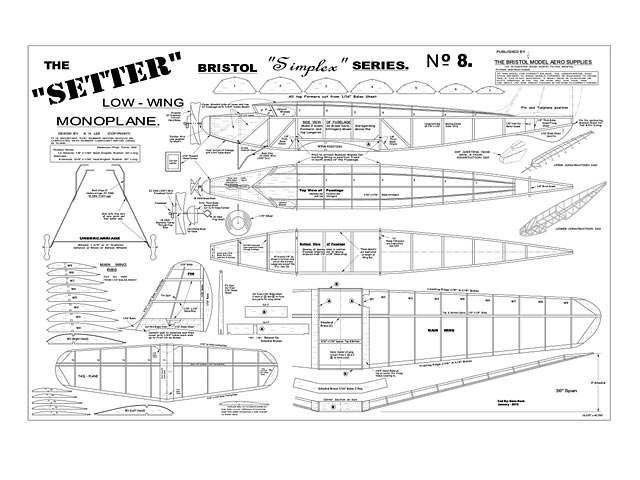 Quote: "Hi Steve, The enclosed drawing of 'The Setter' will not directly overlay on the original scan. I found many drafting errors. I fixed them as best as I could. Cad 3D was used to work out the details and hopefully everything is now correct. This drawing is a bit map exported from cad and was at 400 dpi before further compression using Acrobat. Anyone with experience should be able to build a replica per the enclosed PDF file. This is a very 'busy' drawing! Gene" 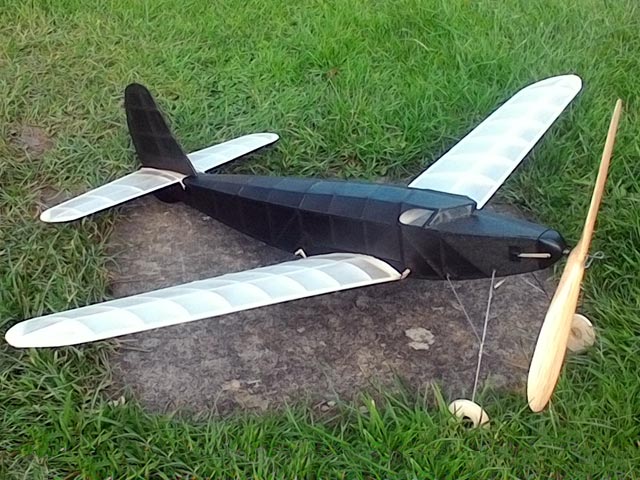 If anyone has a date for this one (1930s?), or any more historical detail, I'd love to hear about it.
SteveWMD - 12/11/2013
Hi Steve, Back on the 12th, you had a note with the Setter design on Outerzone, asking if anyone had a date for this design. I was just poking around in a scanned copy of the June, 1941 Aeromodeller and saw the attached ad [see more pics 003]. It appeared on the inside back cover. So at least we know it existed by then. The attached image is from the upper left corner of the page, and I have not done anything to it. There are a lot of Aeromodellers at http://colinusher.info/Model%20Aircraft/images.html , but I imagine you knew that.
lincoln - 18/11/2013
Some nice pics here [see more pics 003, 004] were sent in by Jiří Gwuźdź of his completed Setter model.
SteveWMD - 15/04/2014
The change of address on the drawing, from Lower Park Row, Bristol to Gloucester Road North, Filton suggests that the plan was available long after 1941 - the move to Filton took place in the late '60s/early '70s (sorry, can't remember exact dates!) It only lasted a few years. I don't remember them ever promoting their own plans.
KenJones - 23/12/2014
Re the date of this design, the rather odd low-profile shape of the canopy may have been influenced by the Frank Haines Mystery Ship racer of 1937 (see Outerzone Plan ID=5217). Regards,
SBurling - 27/12/2014
The odd slant on the windshield dates back earlier than the Mystery Ship. The Vultee V-1 had this feature in 1934, as did the early Boeing 247, some Miles aircraft such as the M.3A Falcon Major of 1935, and the Stinson Model A (1934). I'm sure there were many more. Some photos and drawings of the Spartan Cruiser II show what appears to be a perfectly vertical windscreen.
LincolnR - 03/10/2017
Hi. Here are a couple of pics of a Setter from your plans [main pic, 005, 006].
TrevorTabor - 09/12/2017
After looking at scale models of Kinner aircraft on OZ, my eyes had a first encounter with the Setter. The first thought that entered my mind upon seeing the Setter was the Kinner Envoy.
AaronKV - 29/08/2021
Add a comment