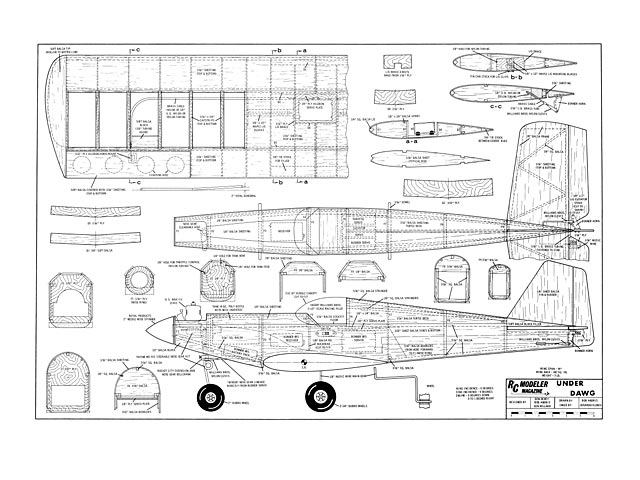 Quote: "Three foot span, three pounds.. and 75 mph with a .15! Definitely not for the beginnner, the Under Dawg was specifically designed by RCM as an experimental pattern ship for the new, small digital systems that will make their debut this year.

The Under Dawg was designed by a committee. Now a committee has been defined as 'a group of people who, when no one can decide what to do, gets togeether and decides nothing can be done'. But, this committee was different. They never got together. So something was done. Let me tell you about it.

Shortly after the Top Dawg (oz) came out, I received a phone call from Fearless Leader (Dauntless Dewey - you know - "Dauntless do it that way - do it this way!") "Hey, I really like that Top Dawg, especially the size and wing planform. But lemme' tell you what I've done. I was doodling with it and sketched in a low wing - then I moved the gear back and added a nose wheel - now it looks like a real sporty contest job. Y'oughta see it!" Slightly miffed - not seriously, you understand, because whenever you argue with the boss you wind up six inches tall - since the Top Dawg is one of my favorite designs, I said "Sounds interesting — you gonna' build it?" "I'd love to, but what with paste-ups (that's editorial talk) and printer's dead-lines, I won't be able to get to it. How about you?" Like I said, you don't argue with the boss...

As for the name - well, if you have an airplane with the wing on top, called the Top Dawg, and you put the wing underneath in a design variation, what else? It's the Under Dawg!

It wasn't long before the prototype was finished and ready for covering. We used the new Super MonoKote, which is still under development. Although it's really ready now, in small quantities, the big problem is maintaining consistency in a big production run. It won't be long before it's available in quantity, and I think you'll like it. Also, the present "wet" MonoKote works very well for trim patterns over the new material.

Test flights on the prototype were exciting, and I want to hasten to stress two things. First, I've always said that if a design can't be flown with rudder only, or rudder and elevator, I'd warn you. OK - take heed! The Under Dawg has to have full house control. It only wallows when you apply rudder. But, with the ailerons the turns are excellent, and the roll rate is extremely rapid, but solid.

Second, be warned that this airplane is definitely not for a beginner. At three pounds, with the Max .15 and semisymmetrical three foot wing, the Under Dawg has been timed at 70-75 mph in quiet air in level flight, so it gets up around 85-90 in some diving maneouvres. It moves!

Spins, with power, are hard to believe. The airplane really winds up, but the nose stays down, with no tendency to go into a flat spin, and hn the controls are aneutralized the spin stops almost instantly.

The airplane will do the full stunt pattern, although tail slides are tough because of the low aspect ratio... " 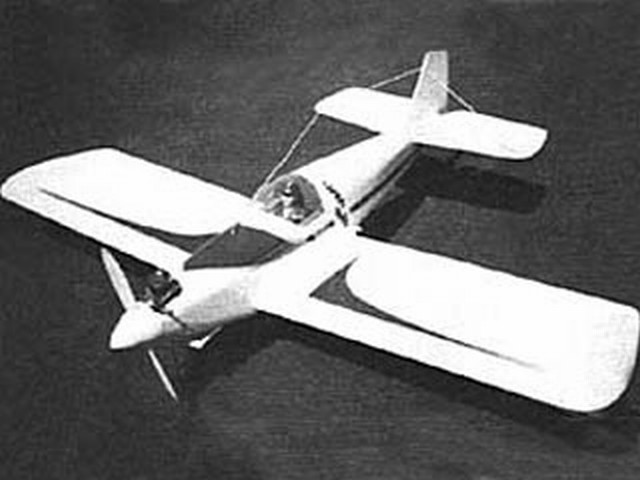