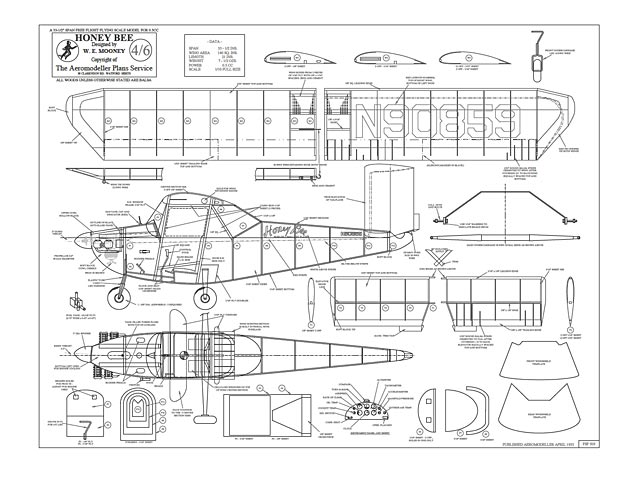 Honey Bee. Free flight scale model for 0.5cc power. Published in from Aeromodeller April 1953. This is a PDFvector plan tracing by hogal.

PERHAPS some explanation as to why the model was built and why it has some particular features is in order.

First: we (the author and his wife) spent every Saturday for some thirteen months working on the real thing. Second: it is of such form that straightforward aeromodelling techniques may be used in its construction. Third: its aerodynamic set-up is such as to make a free flight scale possible.

Built to exact scale in all respects including dihedral in the wing, there are some penalties which we felt were worth taking as far as flight is concerned in order to obtain the satisfaction of having an exact scale ship for the judges at the 1952 American Nationals.

Two things could be done by the novice to simplify the trimming problems. The dihedral, at rest, could he increased to one inch at each wing tip and the included angle at the empennage could be increased from 90 to 100 degrees. It should be noted that the dihedral specified is at rest, since with the wing attachment used there is an 'in flight,' wing deflection of approximately one half-inch. This way we obtained an exact scale plane for the judging but, a slight amount of dihedral for flying. The dihedral tailplanes also add their bit to spiral stability, but, less fin area and more stabilizer area will make a model which is easier to trim.

The original model has had flights of 90 seconds on a 45 second motor run. It makes beautifully realistic take offs and climbs well with the Frog .50 cc turning only 5,500 rpm. It has never been flown under full power because the pilot has always been timid. Flights to date have numbered 55 plus, and the model took third at the Nationals, and tied for fourth at the Inglewood Flightmasters Third Annual Scale Contest.

The model is, in general, very simple to make and should present no difficulties to anyone except a novice at the modelling game. One should note, however, that the model is small and quite strong so the very lightest, firm balsa should be used to keep the weight down.

With a diesel, low powered hops are a cinch. The author feels that hand launches under power are pretty rough, especially if the airplane isn't trimmed. There are more feet of altitude to accelerate through before it hits!

With low power, as low as possible, allow an ROG attempt. The model may just taxi along but indicate any radical turning tendency. Check the gear for a straight roll and then use some thrust offset to correct the turn. Gradually increase the power until the model takes off by itself. By adjusting the thrust line and trim tabs, obtain a gentle left turn under power and a gentle right turn in the glide. HAPPY LANDINGS!" 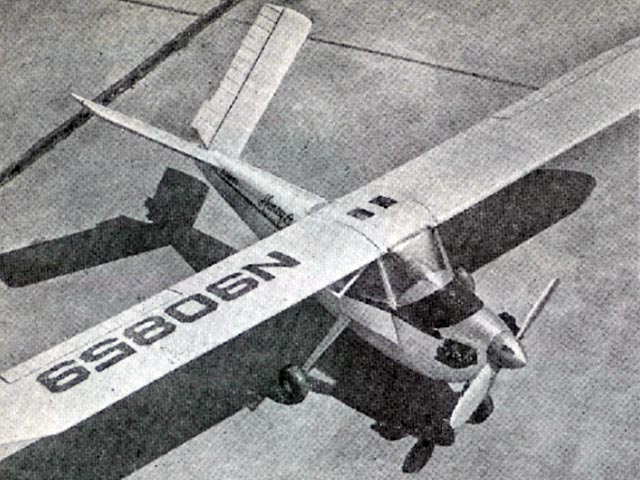