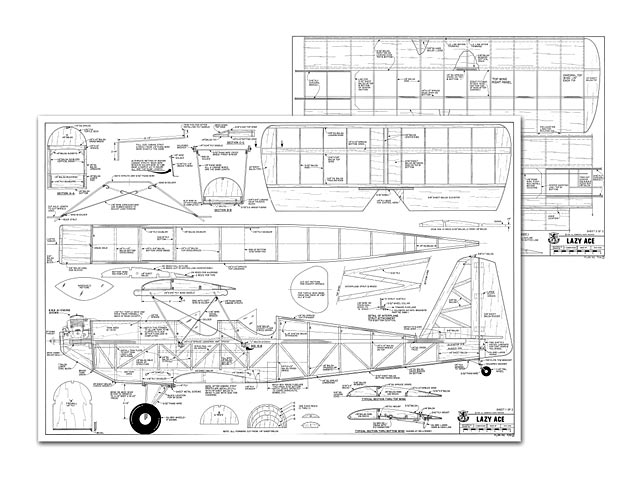 The Lazy Ace is an airplane that is just what its name implies. It is for flying on a lazy Sunday afternoon when you want to fly and fly and fly. In fact, it is one fine flying machine. I have had more pure fun flying the Lazy Ace than from any other aircraft that I have ever designed, or flown, for that matter. The Lazy Ace was designed to be a super biplane, and it is. It was designed to fill the need for a really good flying, realistic looking big biplane, and it is.

The Lazy Ace is a big airplane, just about quarter scale size of a home-built, although it is not a scale model of anything. On the other hand, a light plane builder could scale the Lazy Ace up and come out with a very fine full size experimental aircraft. My wife keeps wanting me to do this, but I have resisted so far. But, back to the model.

As I mentioned it is a big bipe, the total wing area is just a bit over 1800 square inches! Both wings span 76 in and the fuselage length is 57 in. It has a lifting horizontal stab for a reason, and this area, coupled with the wing area, gives it almost 2150 square inches of lifting surface. It is a big bipe to satisfy that urge to build a big aircraft and yet it flies perfectly on any of the powerful .61 engines like the Max .60 FSR or the Webra Speed .61. The normal .60 engines will fly it well, but the Schneurle engines really make it perform. You don't need a chain saw engine or a power transmission for this aircraft because, even though it is big, it is light in weight. My Lazy Ace tips the scale at only 9-1/2 pounds, which gives it a wing loading of just a bit over 12 ounces per square foot. This means that the aircraft is flying on the wing rather than just on the engine as do so many of todays pattern aircraft.

The construction of the Lazy Ace has been patterned a bit after the manner in which I have been building and beefing up Old Timers and Antiques, and so far this structure has proven to stand up to any strain. And last weekend, old friends Jim Simpson and Gerry Krause, seemed to be trying to take the wings off of it with outside spins, crazy maneuvers that ended in long power dives, etc but then you know what its like when you're flying other peoples aircraft. Or, at least until I told Jim that I had finished drawing the plans so it wouldn't be too hard for him to rebuild it! But, nothing came un-glued, and we flew a gallon of fuel through the engine just having a lazy afternoon of fun flying.

I, as yet, have not found any bad tendencies with the Lazy Ace. It can be slowed down until you just know that it is going to fall out of the sky, and yet it doesn't. It can be bounced in for a hard landing, and yet when full throttle is fed to it, it has no desire to torque over and die. Landings are a dream - it can be stowed down to a walk with the tail down for a three point landing, or can be brought in fast for a wheel landing with the tail high. The take-off run is true and lift off is in about twenty five feet, ail without any urging from up elevator.

Now, to the point about the lifting stab As many of you will remember, I have written several times that the way to make smooth take-offs with a tail dragger is to get the back end of the aircraft up and flying as soon as possible. With the lifting stab on the Lazy Ace, as soon as you feed in high throttle, the tail lifts off of the ground and the aircraft assumes a perfect take-off attitude. As a matter of fact, on the very first flight of the Lazy Ace, it made this type of a take-off run and soared majestically into the sky, climbing out just like a full scale aircraft at the hands of a competent pilot. A large cheer went up from those who came out to the field to witness the first flights. Just about the only thing that had to be done after the first flight was to get the engine to throttle back to a normal idle. Everything else was perfect. The angles of incidence, in this case, top and bottom wing set at zero, stab at zero, and engine at several degrees downthrust, were perfect.

In fact, if you think that I am high on this aircraft, I really am. It is the best that I have designed and really the easiest to fly. The flat bottom wing allows this aircraft to fly just like its big brother would if it had a big brother, and yet the Lazy Ace can be flown inverted from horizon to horizon with very little down stick. The only place that the flat bottom wings show up to a disadvantage is in the outside maneuvers. I have yet to do a really good outside loop, as it is a bit tough to tuck under, but other than this, the flat bottom wing makes up for any sacrifice by being so darn flyable, and yet so for-giving that I would not want to put a semi-symmetrical airfoil on it, and cer-tainly not a symmetrical section.

The structure of the Lazy Ace is strong, and yet very light, and it is super easy to build. It does take a good amount of balsa wood, and about four or five rolls of MonoKote to cover it..."

Update 03/04/2015: Replaced this plan with a clearer copy, thanks to Balsworkbench.

Quote: "Congratutations on selecting the LAZY ACE. It is the classic of all biplane designs. Often copied, but never duplicated, it flies like othen aiarcraft only wish that they could. When the LAZY ACE was first designed and flown the .61 engine was the largest engine then readily available. Since that time much larger engines have been developed. Just about everything has been used to power the LAZY ACE, even engines as large as the Quadra 40. I feel that the best power is currently either a .90 or 1.08 two-stroke, or a 1.20 four-stroke. It will accept the ST 2000-3000 series in the nose. The drawing with these instruction sheets indicates the slight modification to the nose to accept the longer 1.2 engines. Do not move the firewall back, just make the nose longer. You may adjust the thrust line as much as you need, it will not affect the flying of the LAZY ACE. For the .90/1.08 engines leave the nose as is. A word about servos and batteries. Use one servo on each aileron, mounting the servos in the wing in the first bay just outside of the fuselage..."

Quote: "Dear Steve and Mary; Thanks to images of the Lazy Ace from your wonderful plans collection, I was reminded that I have some information others might find of interest.
Attached please find some scans of modifications Chuck Cunningham suggested for this model. Some time ago, a very good friend gave me a short kit he had cut himself of the 76 inch version of the Lazy Ace, and included with it were these sheets.
Hope this proves useful, and many thanks again for a wonderful website!" 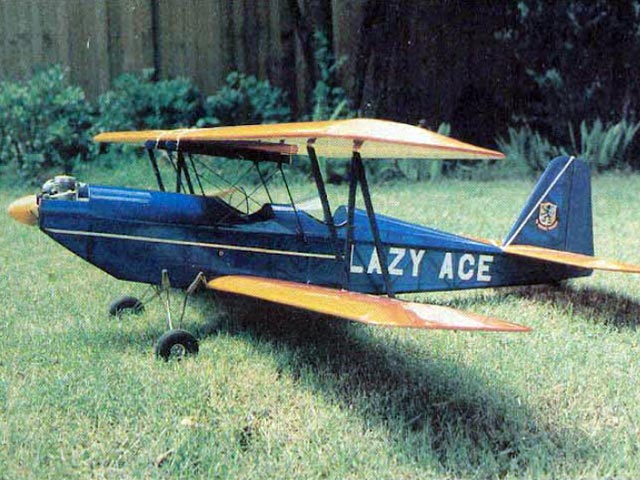 I built this Lazy Ace from plans I down loaded from Outerzone [more pics 005-009]. Thanks many times over for such a great site.
BobSealy - 06/09/2016
I love the Lazy Ace. Me and Eddie Crump built the lightest one I ever saw, changes made in the wingtips, nose and tail made it look like an SE-5. Two others built looked like a D-7 and a DH-4. You can make it look like anything you want with a few changes. Ours was so light because the original was waaaaay overbuilt, leave out half the wood and it's still plenty strong. I cut foam wings for ours and a foam top for the fuselage, all covered with low heat EconoKote. A FOX 74 pulled it just fine at less than 10 lbs. But the ideal engine was (and still is) a Supertigre 90, same size as a 61 but will pull a 14x6 prop without complaint. Build one, you will love it.
DougSmith - 09/09/2016
I've gotten a lot of compliments for these photos of my not-yet-covered Lazy Ace [more pics 010-012]. I thought you might like to add them to your site. I built this one with a 1/8" balsa top deck rather than the 1/32" ply shown on the photo, and with only a single cockpit.
RobR - 19/07/2017
Dear Outerzone, thank you very much for supplying all these lovely plans! I made the Lazy Ace from these, according to plans, modified the nose and stab a bit, Laser 155 [more pics 013, 014]. Great flyer!
RalfMuskens_Netherlands - 29/03/2018
Here's a Lazy Ace I built [more pics 015-019]. The engine is a Saito 91. The only thing left to be done is installing the radio.
RobReynolds - 16/01/2019
Add a comment