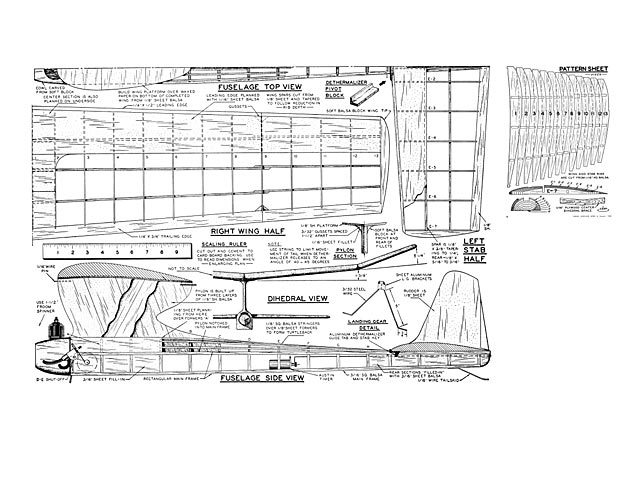 Quote: "THE moral of the story of the Vixen is short and to the point: Keep your de-thermalizer in good operating condition. Because I didn't, the contest career of the original ship was likewise short.

First brought into the fray at the Tallcorn meet, the Vixen quickly snagged one of the sparse thermals on 'A' day and turned in good time to buoy my hopes while trying to extract it from hiding in a huge cornfield. Getting back to the field late in the afternoon, we found our good friend Dutch Hess, of De Kalb, Il, firmly entrenched in the top spot in Class A. Two more flights with the motor having fits of temperament left Dutch still on top with a 30 sec edge and yours truly in second place. However, I had the last laugh in this instance, for when the sponsors of the meet were unable to pay off the myriad of bills run up in promoting the big contest, Dutch was left holding the bag for a prize. Meanwhile the local Plymouth dealer donated a $200 trip to Detroit for the best home-town performance, a prize I was pleased to accept!

At Detroit, of all places, the balky motor balked its last and I gave it the heave-ho and installed another before tackling the annual Waterloo Prop Twisters meet, one of the best in the Midwest. Fellow clubman John Heasley, home from college on vacation, found the simple lines of the Vixen the correct prescription for scarcity of building time and quickly turned out an Ohlsson 23 version. Test flown the night before the contest, he soon had it performing so well that the next day he handily won first in Class B.

But to return to the moral - originally the dethermalizer installation was permanently fixed with a wire and tubing hinge. Of course you can guess what happened - as I should have known it would. On a hard landing the hinge tore loose and in the contest hustle the break was left unrepaired. So although I was lucky in snagging only a weak thermal on the first flight at Waterloo and none on the second, on the third my fate caught up with me. After a 6:33 official flight, which insured first place in Class A, Vixen disappeared into the blue. And I mean disappeared. For when it turned up months later during the corn picking season, it was some 25 miles away.

Several others have now been built on the strength of the fine climbing and gliding abilities of the first two versions, but they have a slight alteration, which you may note on the plan - a much more sensible and simpler dethermalizer hinge arrangement.

You should find the Vixen just the thing for the present contest season, with the '49 rules the same as last year.

The plans may be easily enlarged by use of the scale ruler which appears on the plans. With this, all dimensions may be taken directly from the drawings. Full size patterns of all ribs and formers make drawing up the working plans a task that should not dismay anyone.

The fuselage is simple but strong. Build the sides of the rectangular main frame one on top of the other and connect them together. Add the pylon, built up from 1/8 in sheet laminations, notched to fit into the top of the fuselage main frame and sanded to streamline shape. Cement formers A to H in place, planking with 1/8 in sheet..." 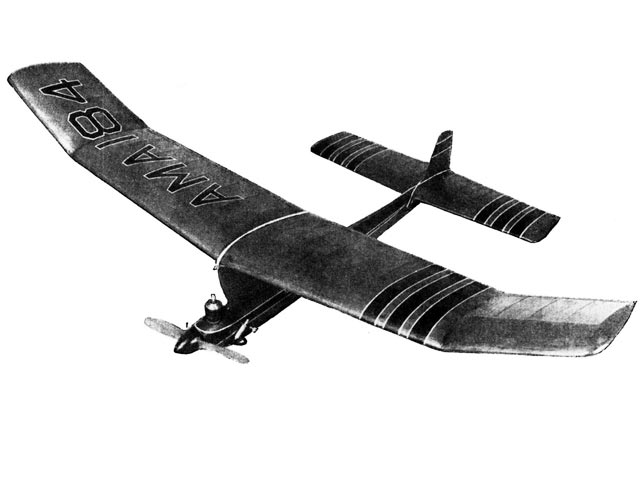