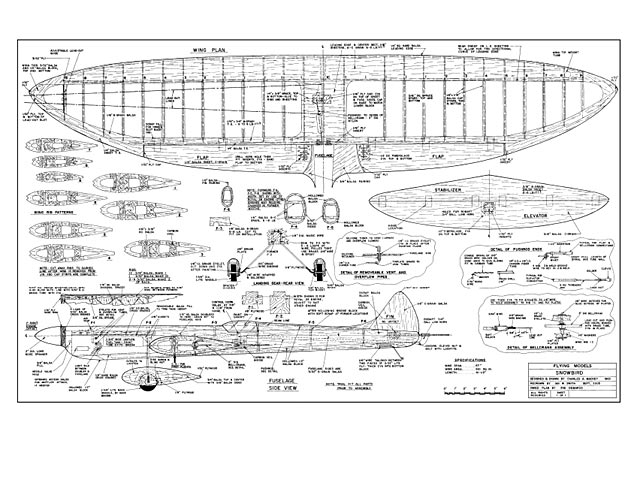 Quote: "Charles Mackey is well known in Stunt circles, with many original, and sometimes curious and pioneering, designs to his name. Examples, from many, are his Bluebird (oz9301), Crusader (oz1970), Lark (oz828), and more recently his Grandpa's Bipe and 34FN - the latter a triplane version of the Bi-Slob. Charles is also the author of the excellent and valuable PAMPA book Pioneers of Control Line Flying.

In early 2004, browsing old magazines, I found the December-January 1964 issue of FM, with a construction article on Charles' Red Wing, a delta wing Stunter with a very offset engine, using an old English .049 diesel. Included in the shots was a beautiful, sleek Stunter with a thick elliptical wing. Its lines were reminiscent of 1950s and 1960s Stunters such as the Ares (oz4884) and Continental (oz346), but with a distinct Mackey line.

So I wrote to Charles, and he kindly sent me a copy of his original, unpublished plan and some photos. I built this Snowbird design, flew it and was delighted with its looks and performance. The long moment arm pops it around squares and triangles with ease, while the sleek, streamlined body and elliptical wing keep stalls away, and let the plane glide forever - at least until easy, smooth landings.

Telling this to Charles led him to suggest we publish, hence this article, and a second Snowbird for construction shots - just as good a flyer as the first. In the following construction notes I will let you make your own way, as you probably know how to build as well as, if not better than, me. I will stick mainly to matters re-lating to strength, alignment and con-trol-system setup, and where I have used less-than-usual methods. However, where you are comfortable with your own different methods, follow your preferences.

A final word before we get clown to business, and please keep this a secret from Charles. He flew his original Snowbird with an Oliver Tiger 2.5cc (.15) diesel. Now the Ollie is a mighty motor, but there was no way I could trust myself to use a .15 diesel to power a 57-inch span, 510 square inch Stunter. So, lacking courage, I powered both my Snowbirds with Royal .28 glow motors, modified and supplied by Tom Dixon. They perform very well, and I recommend using good .25 to .32 Stunt glow motors - just don't tell Charles.

Construction: Use contest-grade balsa, except where noted on the plan. White glue for all internal and stressed structure, sandable glue at surface joints, thick and thin CyA for key areas of strength and for metal-to-wood joints. Epox-ies are only used for pushrod assemblies, hinges, fillets (with micro-balloons), and firewall (diluted with methanol) to fuel-proof the engine tank area. I use balsa cement for the capstrips which are held at each end by masking tape and pins if necessary. The cement dries quickly, pulls the caps to the ribs, sands easily, and smells great.

There are a number of 'pointy' parts of the plane: wing tips, fin tip, stab and elevator tips, and the rear of the wheel pants, which can be hardened against hangar rash. Slit along the grain with a razor saw, insert 1/32-inch ply, secure with thin CyA then trim flush with the surface. As you start to build, the very first thing you should do is make the fuselage sides: see the text below under 'Fuselage'.

Wing and flaps: This is the hard part. Because of the elliptical shape of the wing, the ribs must be cut with precision, and set up on a suitable wing jig. I use an Ajusto-jig, and the holes in the ribs are shown for this on the plans. Ensure the holes are on the ribs center-lines and are spaced accurately back from the spar. I drill the holes 1/16 inch oversize for the jig rods, to allow a little 'jiggle' to help adjustment. I use 3/32-inch wood for the ribs as it glues up and assembles more easily, but if you are less clumsy than I am, use 1/16-inch wood. The carbon veil, stuck on with white glue, is to strengthen the ribs during jigging and assem-bly, but if you are confident in your skills, leave it off. Don't omit the 1/16 x 3/16-inch vertical braces between the spars, installed before jigging the ribs. Note the dashed line on the ribs show-ing where material is cut away, for con-trol system clearance and lightness, once the wing is off the jig and cap-stripping is finished.

A photo on page 50 shows the ribs on the jig, with 3/16-inch center rib 1.C at the front. The wing needs to be built upside down (see later) so you are looking at the underside of the ribs. Ensure 1.C is the 13th rib from the left, counting with the TE towards you..." 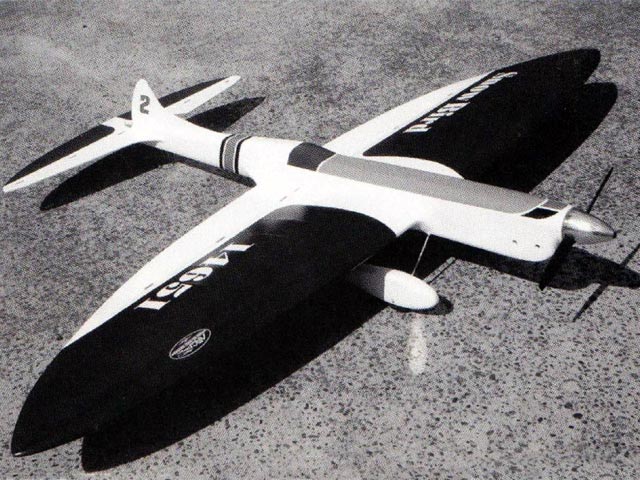