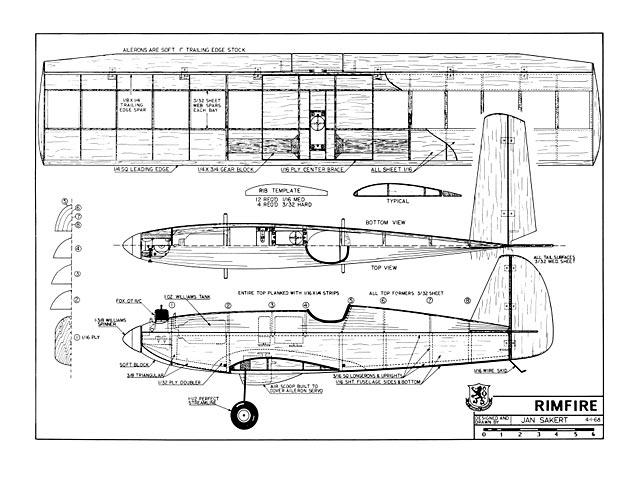 Quote: "The Rimfire was the second place winner in RCM's recent Design Contest. The plane shown in the photographs was flown to California, equipped with a prototype of the new Orbit ultra-miniature proportional system, and test flown by Orbit and by R/C Modeler Magazine. The flight characteristics of this little ship have to be seen to be believed. Rimfire by Jan Sakert.

So what's unique about it? Nothing, if you consider only its appearance and general configuration. What IS significant is the fact that here is an airplane that weighs scarcely over 1 pound, flies on 180 sq in of wing and is full house digital proportional machine. No gallopers, pulsers, couplers, etc to contend with - just clean and reliable digital proportional, which, at the time of this writing, is the ultimate in refinement and at the poinnacle of the current state of the R/C electronics art.

So what does that prove? It proves that to enjoy full house proportional flying it is not necessary to provide yourself with an airplane that takes considerable dollars to buy, considerable time to build and considerable space to construct, stow and fly. Also, flying areas are getting smaller as they get more scarce. The relatively low noise level of an .049 - .099 as compared to the roar of a big .60 might mean a step in the preservation of out more sensitive flying sites.

Will small airplanes make Quik-Fli (oz6526) sized airplanes obselete for contest work? I don't think so. However, I do think that the big airplanes will become somewhat fewer. Of the X number of thousands of R/C flyers, only a small percentage are contest or competitively inclined. The majority are Sunday flyers and sport types who are in this hobby/ sport strictly for the fun and relaxation that it provides. A small airplane is just as much fun to fly as a large airplane. Considering the mentioned advantages of a small airplane (time, money and space) it seems fairly certain that the number of big ships will begin to decrease in the fun and sport circles.

Another area for invasion by this small equipment is in the scale category. Just about everyone of us at one time or another came very close to building a scale airplane. Everyone of us has a favorite airplane and would build it if scale wasn't such a production. When you consider the weight of scale attachments (cowls, guns, turrets, scoops, etc) plus the weight of the guidance system the whole idea becomes frightful. To come up with a decent wing loading, you end up with an airplane that is nearly too damned big to keep in the garage. A 2 in scale is about the norm right now. Further discouragement to build scale is the absolute lack of scale accessories in this size range. Ever try to buy a 4 in spinner; a 16 in prop? A pair of 5 in wheels (vintage excluded)? All these attachments have to be made and the construction total is enough to discourage all but the most ardent of scale addicts. So, the reduction in weight and dimension of the guidance system will make possible a reduction of weight and dimension in the airplane that carries it. This may result in a general increase in scale activity, especially if the rules ever get around to rewarding workmanship and fidelity instead of gadgetry and an insane flight pattern.

What else could a combination of small radio gear and small airplane lead to? I suspect that kit manufacturers may entertain a more than casual interest in these prospects..." 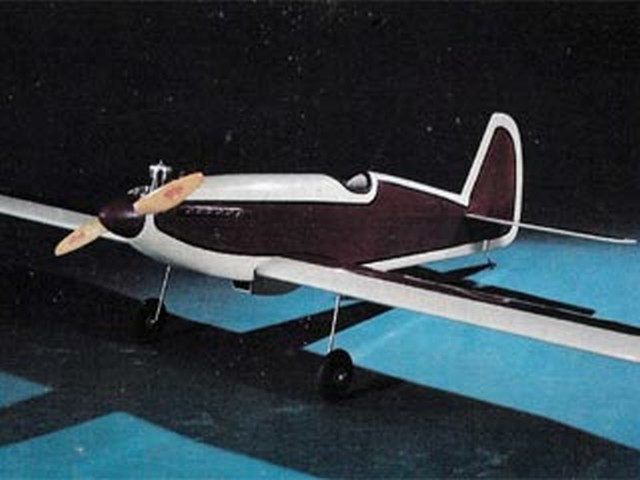