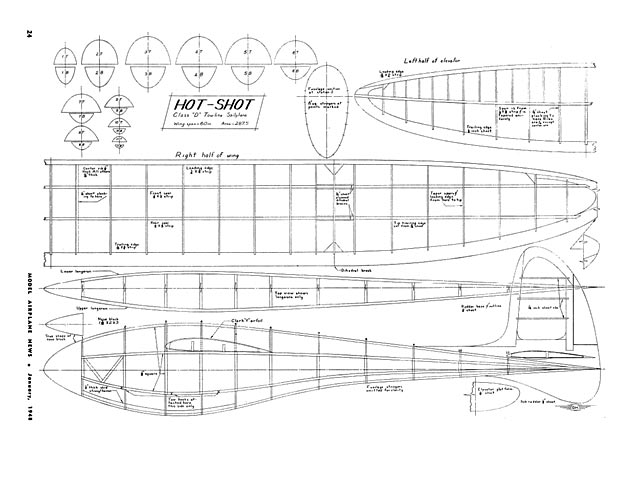 Quote: "A sailplane designed for top performance in the winds of Kansas. Hot Shot, by Dick Holloway.

HERE is a model sailplane (not a glider) designed to combine beauty and efficiency. This plane was designed and built well over a year ago and is still going strong, a fact which speaks for itself in windy Kansas.

The first meet in which the ship was entered was the 1946 Nationals. In two test flights in the early morning the ship hopped thermals twice for flights of almost 9 min 6 sec duration. During the mild cyclone which arose later, one wing panel was demolished when the ship cracked a spectator across the shins. The plane was rebuilt and has been found capable of many fine flights under any conditions.

Construction is conventional throughout. Start with the fuselage, which is the only part that offers any difficulty. The two fuselage sides are built one over the other to assure identity. When dry, these are joined by 1/8 in square crosspieces which are beveled on the ends to allow the fuselage to assume its trapezoidal crossection. Start inserting the crosspieces at the center of the fuselage, working first toward the tail, then the nose of the plane. Keep the work aligned at all times.

When the skeleton framework is dry, add the 1/16 in balsa sheet bulkheads and make the space between bulkheads 1 and 2 into a ballast box. Be sure to glue in two each of bulkheads 3T and 6T. Add the desired number of 3/32 in square hard balsa stringers, spacing them evenly around the fuselage in notches cut for them. The original model has 22 full length stringers. Scallop the bulkheads so they will not touch the covering.

Next, glue the noseblook, rudder and sub-rudder in place and sand all parts until a smooth covering is assured. Cut the elevator slot in the rudder base and glue in the elevator platform. To complete the fuselage, add the three iron wire (paper clip wire is fine) tow-hooks at the points shown on plans.

The wing is of simple construction and should present no difficulties. A flat centersection combined with tip dihedral of 5 in produces excellent results. Be sure to make the dihedral joints very strong. The centersection of the wing is covered with 1/16 in sheet balsa..."

Quote: "Here's a swoopy free flight glider called the Hot Shot, designed by Dick Holloway. Appeared in January 1948 Model Airplane News. I've scanned the plan and article. For those of you who think in metric dimensions, there is another version of this plan over at Hip Pocket Aeronautics. It appears in Aeromodellismo number 13, which can be found in the 'Plans from Books and Magazines' in their Builder's Gallery. I think that, if enlarged, this might make an enjoyable RC sailplane. " 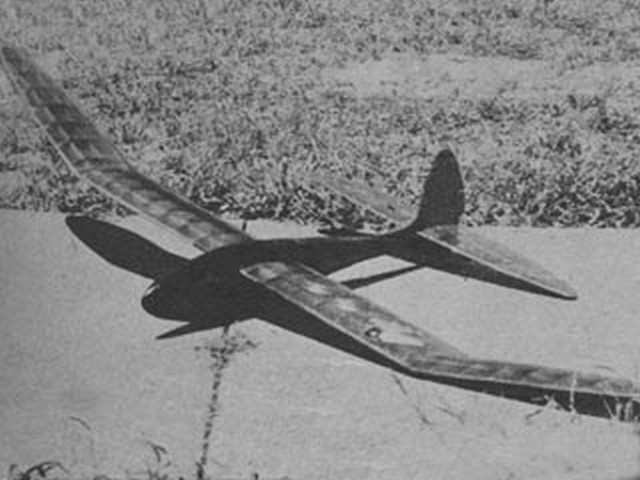