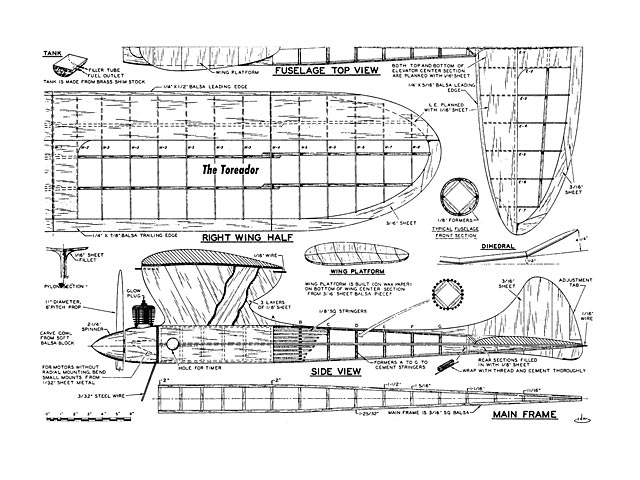 Quote: "When the new rules first appeared, many modelers raised their collective eyebrows and predicted an avalanche of super-light 'floaters,' held together by hope and dragging along acres of wing area. This was probably a natural first reaction to the complete abolition of wing loading requirements. But, anyone who goes off this particular deep end is going to be left holding the sack at most contests.

The hawk-like glide that low wing loading can produce is nice to look at, but what good does it do you if you haven't gotten a reasonable amount of altitude (which you will never get by piling on wing area), up into thermal-grabbing territory? And too, there is a more practical limit to this question. If the ship's structure is to have any durability and if you don't want to hire a moving van to truck it around, then a medium, lightly loaded job is definitely the answer.

It is in this classification that The Toreador falls, having an 8-1/2 ounce per square foot wing loading when a .29 cubic inch engine is used. This amount of wing area does not seriously restrict the climb, motors like the K&B Torpedo will produce a rolling, vertical altitude-getter, and the glide resulting is calculated to stick in even a weak thermal. The ship is strong, durable and of convenient size, due to use of a fairly low aspect ratio.

If you don't quite agree with me on this wing loading affair, then use a .23 or .24 cubic inch engine. This will reduce the required power loading weight and really kick the props out from under ole man wing loading. In either case you'll find the Toreador stable and easy to adjust to the type of contest performance that pylon jobs are famous for - a really depend-able trophy-collector.

One of the main features is the lack of ignition - made possible by that happy little gimmick, the glow plug. It and one of the new D-E fuel shut-off valves hooked to an Austin timer are an unbeatable combination for carefree flying. In fact you'll be astounded at how much more fun model flying can be when all the worries attendant to ignition are tossed out of the window.

You'll note that the ship does not feature that horrible creature of the 'New Look' in modeling, the pencil fuselage. In this regard I think it is well to remember that the cross-section rule was eliminated not because the AMA Contest Board thought this a progressive step, but rather be-cause of necessity, to cut down on the endless processing required at meets.

Besides, these spindly little pencil bomber fuselages have none of that end-to-end strength that comes in so handy in a hard landing or a cart-wheel in a high wind. As far as I'm concerned, the argument that pencils are less drag is mainly an academic one at best..." 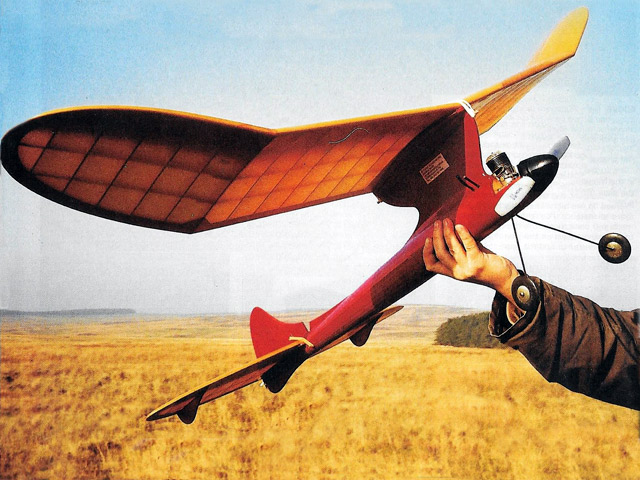