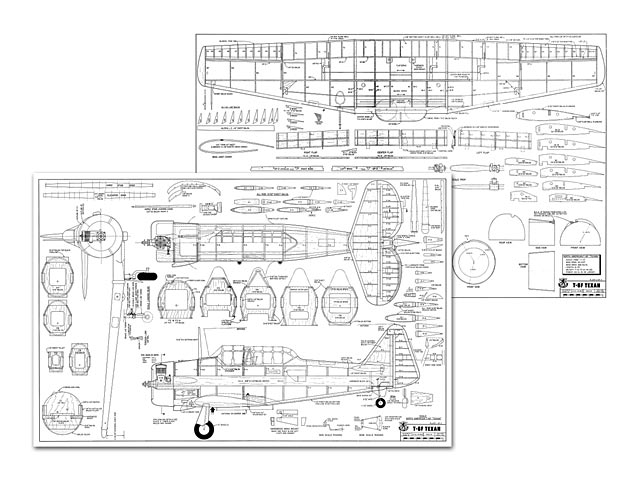 Quote: "I suppose I had wanted to build a T6 for nineteen or twenty years. My first experience with it was in 1950 and it made a lasting impression. Back in the '50's (the good old days) a radio controlled T6 would have been out of the question, so I had planned to make a scale U-Control. Somewhere along in my Air Force tour I managed to acquire a set of T6 tech orders. This gave me the best source of reference I could ever hope for. The tech orders and a good three-view drawing from Air Trails Magazine has been with me all these years. Three years ago, I was digging through and cleaning out my old foot locker and there they were! I never did finish cleaning out that locker.

With a pad, some sharp pencils, a scale and a fifth of Scotch, I soon found the T6 was a fairly good choice as a scale R/C ship. I decided to go 'all out' scale and change nothing. A knowledgeable friend thought I should put about 1° to 1.5° positive incidence in the tail plane (he indeed may be right) but I chose to leave it at zero. I keep wondering what would have happened to the flight characteristics if I had followed his advice. Maybe the next time around I'll try it.

The airfoils, fuselage cross sections, and all dimensions for the Texan are scale. This ship is not for any but the experienced model builder since it is not an easy ship to put together. On the other hand, for me, it was indeed a labor of love, and I think any other scale nut would find many hours of joy at his workbench.

Before I get into the building details, I would like to give credit to the fellows who eagerly lent a helping hand in this project: Pat Cherubino, for his photo work; Norm Rosenstock (our little old muffler maker of B & N Model Accessories) for all of his help with the exhaust system and scale gear; the fellows who scrounged around to find that hard to find .030 plexiglass and, last but not least, my fearless test pilot, Bob Van Wymasch (he had the best pilot credentials around - tied for first C Novice at the '69 Nationals). Over the two year period, from conception to completion, I am certain I have managed to leave out someone who was helpful and to those I give my most sincere apologies.

Now, let's get to it! Please read all instructions carefully before you start construction..." 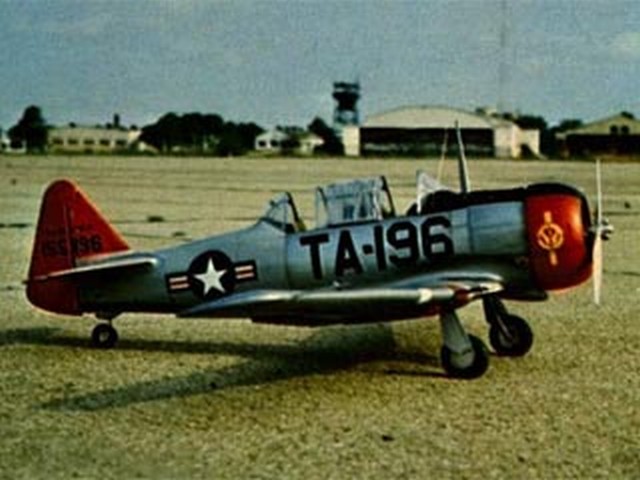 Hi sirs. I'm sharing some photos of the FAC 777 (Fuerza Aerea Colombiana) Texan AT-6 [more pics 006-019]. I ordered directly from RCM Plans Service, years ago, the Al Holmes plans of his great T-6F Texan Model. I decided to detail and scratchbuilt the entire front and back cockpit. The landing gears and wheel wells, the motor cowling and propeller are also scratchbuilt and detailed. The model is actually exhibited at the Museo Aereo Fenix, formerly Museo Nacional del Transporte, in Cali, Colombia. Regards from Cali, Colombia.
AndresAcuna - 09/05/2017
Add a comment