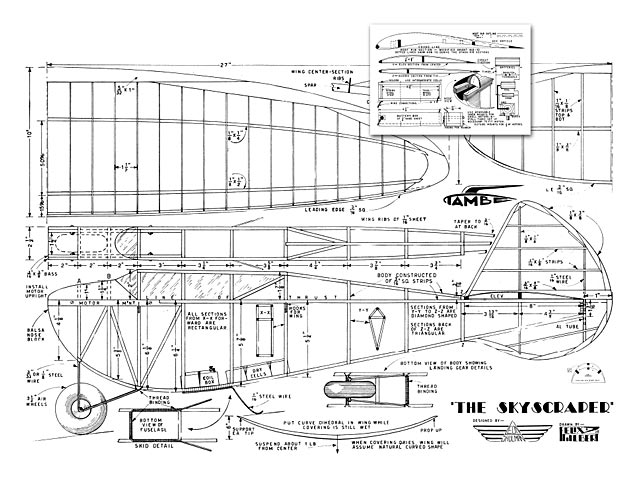 Quote: "How to Build A Universal One Wheeler. A Gas Model That Will be a Consistent Winner in Any Contest. It Recently Won a Contest at Miller Field, Staten Island, NY, by Making a Flight of Seven Minutes With a Thirty Second Engine Run. It Has a Very Flat Glide.

Unusual in design but a plane that climbs fast and has great soaring qualities. A wing section of the latest design is used.

SOMETHING new in gas model aviation - a one-wheeler gas model that will accommodate most any motor on the market. To date the ship has been flown with a Trojan, Husky, Cyclone, Gwinn-Aero and Brown B, C, and D; giving most gratifying results with all of them. The ship can be flown in both the large and small NAA events at contests.

On occasions it has flown over five minutes without covering more than 200 feet distance from the take-off spot. Its outstanding flight characteristic is the extreme stability. Due to a low center of gravity and a low center of lateral area, the climb is a tight, vertical spiral. The glide is very flat and slow due to the high lift, stable airfoil.

A great deal of airfoils were tested on this ship till the present airfoil was chosen. The ship ricdes thermals with remarkable facility as has been proven at various times. An associate model builder who constructed the same job, and used a Husky for power, attained flights of over eight minutes. The ship weighed 1-1/2 pounds at the time.

If a small motor is used, it is recommended that the builder use lighter wood which will cut down on the wing loading.

Construction.The fuselage is built of 3/16 square balsa strips. From the nose back to section X-X the fuselage has an oblong cross-section, and that part of the body is built in the orthodox manner. While building it allow the side longerons to extend the full length of the fuselage. Note that the outside motor mounts are integral with the side longerons..."

Quote: "Here's a model, plus article, that I just scanned from the Nov. 1938 Model Airplane News. Power model designed by Leon Shulman and drawn by Felix Gilbert." 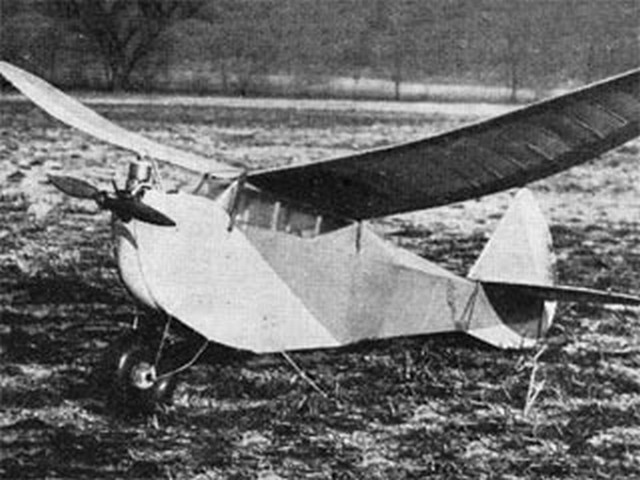 I built a couple of years ago from a borrowed copy of Air Age Gas Models [now available for free download on www.rclibrary.co.uk] a roughly half size Skyscraper by Leon Shulman for Gasparin CO2 power [see more pics 006].
ChrisBrainwood - 11/03/2016
Add a comment