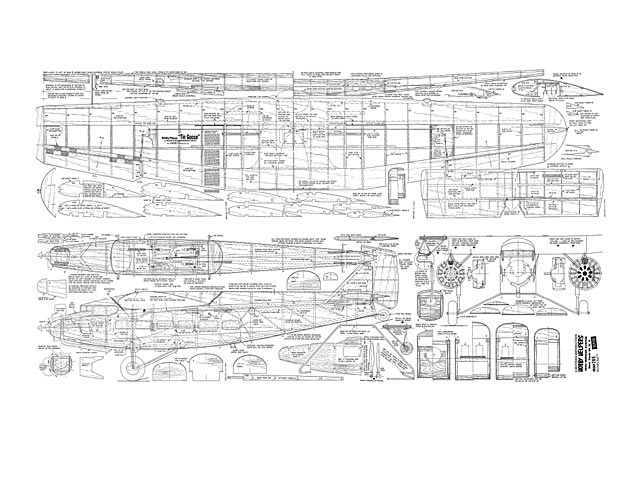 Quote: "Smith/Plecan Tin Goose. For a considerable period prior to his death S Calhoun Smith had been working on plans for a radio controlled copy of the famous Ford Tri-Motor Transport. We asked Paul Plecan to prepare the construction drawings with the help of Bob Peru.

After Cal Smith's untimely death, I was called upon to complete the design of his radio control Ford Trimotor (and to ink the finished plans). We'll refer to it as the 'Tin Goose' from this point on - a very apt nickname for such a workhorse. Cal had drawn wing and stabilizer plans, plus fuselage profile and top view. Some typical helpful sketches rounded out what Cal had done on the project. Rib and bulkhead spacing was shown on the pencil drawings, but no rib tapering or detailing of cross sections had been started.

With the aid of Bob Peru, it was determined that the old Tin Goose was meant for 'full-house' multi R/C treatment. A big '60' would haul it around, the outboard engines being dummies. Bob recalled that Cal had mentioned a Citizen-Ship 10 channel set-up, and we concur. Citizen-Ship servos are shown on the plans. Slight lengthening of the servo board will permit it to accommodate the larger Bonner servos.

Cal's original concept was excellent - at 1 in to 1 ft scale the Tin Goose has all the proportions of current high-performance multi designs. What little doctoring that is necessary is slight, the authentic shape being kept where enlargement was deemed necessary (like the tail surfaces). Exact scale dihedral is shown on the spar layout to left of wing center-line. So much for the purists. But we heartily endorse the use of the slight exaggeration of dihedral to the right of wing center-line. All builders of Cal Smith designs will agree that flyability was the primary consideration always - and we'll not let you down on that score.

In conformance with this line of thinking, we modified the scale (flat-bottomed) airfoil to a type in universal use - slight reflex and large LE radius for good stall characteristics and stable inverted flight. Although scale airfoil is shown in side view, wing construction is based on the more modern airfoil.

The obvious question as to 1 or 3 engines churning the air has a most practical solution. As we see it anything more than 2 engines is sort of asking for trouble. To some builders even 2 is one too many. The 'elevated' position of the engine bearers in relation to the thrust line drawn on Cal's plans shows that a Fox 59 was intended, solo style. Most other engines have the thrust line flush with tops of engine bearers. We have conferred with Bob Peru on many points on TG. Cal was a frequent visitor at Bob's hobby shop in Red Bank, NJ.

While we were most happy to have Bob's help and suggestions, there was one that we'll leave up to you readers. It's an optional. Bob recommended the use of a Top Flite Taurus wing kit (and there was a notation of Sur-Form LE covering on Cal's wing plan). But a check shows that the 33 in Taurus LE sheeting won't do the complete job on the TG which is 35-1/2 in from center-line to tip rib. If you can do some corner-cutting, you might be able to put the Taurus wing kit to good use, although its chord is more than 1 in shy of the 13 inches of the TG. For a Trimotor scaled 7/8 in to 1ft it would really fit nicely.

So much for the planning and background - how about a brief run-down of construction? Fuselage is basically a box, only the top being adorned with formers. Longerons, uprights and diagonal braces are pinned to plans first. Note that top longerons are straight. This helps in later stages, when fuselage is pinned inverted to workbench for addition of cross braces. Medium hard balsa for all fuselage framework. If there is any difficulty in making the bend along the bottom longeron with doubled 1/4 sq stock, go to quadrupled 1/8 x 1/4 strips. Before you cement side sheeting on, be sure that s4de gussets are in place (3/32 ply, set in flush). If you want to, you can omit them now and set them in flush with the 3/32 side sheeting, which is the next order of business.

When cement is dry, assembled side can be unpinned from workbench, flipped over and pinned down again. Framework side uppermost, it is a good time to check for missing gussets. Second side framework is pinned to first while flat on bench. Be sure you don't cement the frameworks together. A razor blade can be run around between the frames to slice through bits of cement, then it is safe to apply the 3/32' sheeting to second side frame. When cement is dry and sides are separated, it is the best time to mark the interior for the servo board cross pieces. Various filler pieces are added now (A, B and C).

Due to curvature of sides, it is best to cement the 1/16 ply nose doublers with the frame bent. Set sides down on workbench, sheet side down. Insert 3/8 sq strip under Sta.2 upright, parallel to it. Weigh side down so that it is to thing flat against workbench at Sta.4. If you do not have white glue for fastening the ply doubler, use a brand-name model cement like Ambroid, Testor's, or Pactra. Pre-coat surfaces, rubbing cement into wood thoroughly. Final coat of cement should be even and doubler should be weighted enough to maintain firm contact while cement or glue dries. Due to large area of cement not exposed to air, let this part of construction set overnight for a good bond.

As previously mentioned, rest of fuselage assembly is best accomplished inverted and pinned to bench. Measure cross braces and fit accurately to obtain smooth bend in sides. Bottom sheeting is next. Note that 3/32 ply inserts and doublers are used at Sta.4 and 6 to let the wire LG struts fit into crosswise channels in fuselage bottom. Said channels are only 3/32 deep, allowing strut to bounce out of channel in a hard landing."