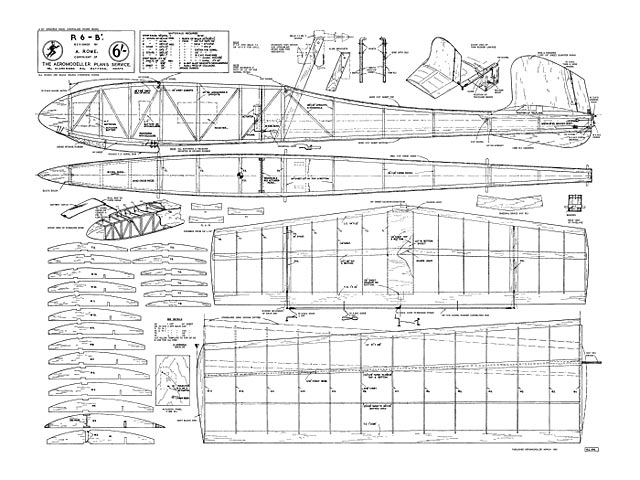 Quote: "The model, now six months old, has been in the air every week-end as well as frequently during lunch hours and in the evenings after work. The need for a strictly functional machine, simple of construction, repair and maintenance influenced amongst other things the placing of the motor and the absence of conventional undercarriage.

It seemed both an unnecessary and expensive bow to convention to place a valuable engine in the nose which is normally the point of impact in the event of pilot miscalculation. Furthermore, such a position apart from ensuring an aeroplane continually messy with exhaust oil, precluded the use of a highly efficient airscrew (paper-thin highly polished blades are hard work and break easily), increased fuselage drag due to slip-stream velocity, introduced undesirable twisting forces requiring critical thrust-line adjustments and prevented a clean entry at the most aerodynamically important point of the fuselage.

Possible alternative placings for the motor included the rear of the fuselage and the top of the fin, but the arrangement shown was finally adopted. Specifically, the advantages of this engine position in actual practice are:

1. The angle at which the motor is set is immaterial because the slipstream has no intruding surface on which to react. Hence no critical adjustment of thrust-line is required and it is sufficient to line up the motor by eye.

2. All exhaust oil is blown clear of the model passing over the tailplane and between the fins. As a result, the model lands in a perfectly clean condition after 30-40 minute flights.

3. Because the slipstream does not have to create drag pushing past obstacles such as wings, fuselage, engine, etc all the available thrust is used for its proper purpose. Consequently, big results arc obtained with small capacity engines with a resultant economy of operation. When several hours flying are packed into each afternoon outing, this question of fuel consumption becomes a very real consideration and the efficient use of a small capacity engine is a useful contribution to overall economy.

As most of our flying in this country is carried out from rough fields, the only justification for the retention of a conventional undercarriage has been its value (doubtful) as a propellor protector on landing. The skid finally adopted for R6-B fulfills its function as a landing device but its replacement by a bicycle undercarriage with wheels inset and the rear wheel say 1/2 in forward of the CG would permit take-off from reasonable ground.

R6-B was originally flown with an inverted Mills 1.3 (thinned and polished narrow blade 9 x 4) fitted with a 20 minute streamlined tank.

In this form and with moderate rudder movement precision manoeuvres may be carried out with flat skidding turns. With the same motor, but with maximum rudder deflection, the model becomes moderately acrobatic, instantaneous control response (and recovery) permitting 'ground attack' methods with perfect safety particularly in view of the model's non-stall characteristic..."

Update 24/01/2015: Replaced this plan with a clearer copy (with hatched background removed) thanks to TonyP. 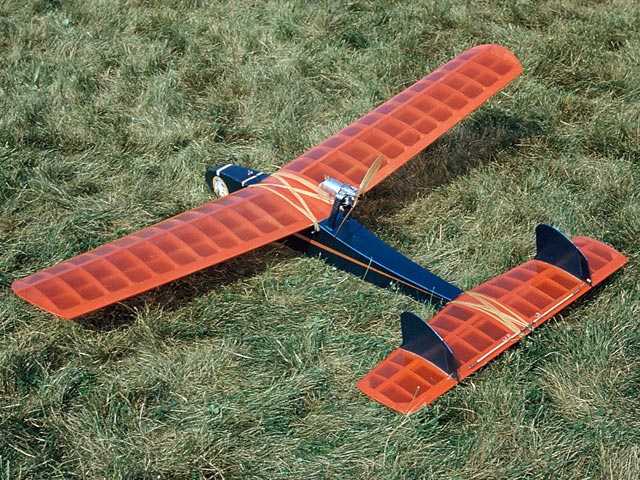