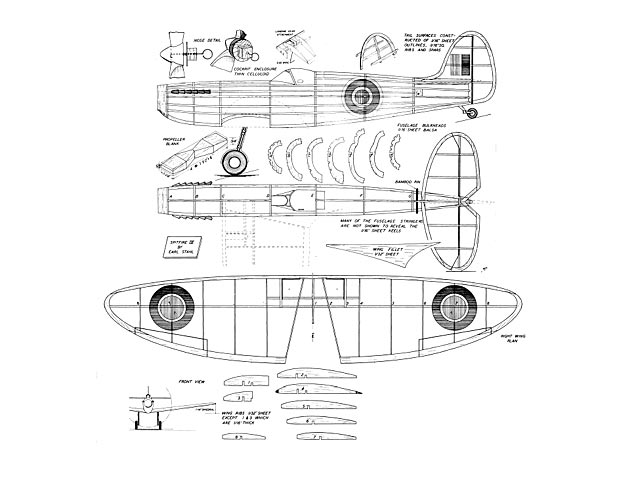 Quote: "Sired by the winning Supermarine race planes of Schneider Trophy fame, the Spitfire was first flown in 1936. At that time, the plane's 367 mph top speed, rocketing climb, and knockout punch of eight guns outstripped anything in the air.

Essentially the plane was conceived as an interceptor to defend England and as such, it was supreme. But with the changing tides of war and with new tactics, more specialized types of fighters were developed. For low-altitude fighting, there was the short-span, stub tipped version. Another had the elliptical wings stretched into sharply pointed tips. For extremely high altitude work, there was the model XIV with a 2,000 hp Rolls Royce Engine swinging a five blade propeller, this craft could fight at more than 40,000 ft and is said to have had a maximum speed of nearly 450 mph.

For our model, we have selected the Spitfire IX which is representative of this remarkable breed of warriors. Simply built to attain lightness for good flying performance, this model Spitfire is nevertheless very attractive and is well worth the time and effort required for its construction. A word of caution, however - select all balsa carefully to obtain light firm stock and remember especially to keep the tail as light as possible, for all excess weight behind the center of gravity must be balanced by ballast in the nose. Finally, work as accurately as possible using the plans and written instructions. Easiest way to make an accurate fuselage of the Spitfire type is by the keel and bulkhead method.

Easiest way to make an accurate fuselage of the Spitfire type is by the keel and bulkhead method. Cut the keels, top, bottom and two sides from 1/16 sheet which may well be sanded thinner to reduce weight. Incidentally, two of each bulkhead -half as shown on the drawing- are required. Assemble one set of them over the top and bottom keels which have been pinned to place over the fuselage side view. Slip a side keel into the proper notches and then, when this structure is dry, remove it from the jig and add the remaining bulkhead halves and keel. Stringers are medium grade 1/16 sq strips and they may be sanded to reduce their weight. Using a razor blade that has been broken to a sharp point, cut notches in bulkheads that do not have them. Do this as the work proceeds so the stringers will be aligned exactly. Place stringers closest to the side keels first and always add them to similar positions of each side at one time to keep from pulling the structure out of line.

Between bulkheads C and D, where the wing fits in, curved pieces of 1/16 sheet cemented between the stringers in the rear anchor the rubber motor by cradling the bamboo pin that fits between them. (this is what is printed) At the cockpit, 1/32 sheet scraps are shaped to the form of the enclosure.

The extreme front of the nose is made from three pieces of 1/8 sheet that have been cemented together. As indicated by the broken lines, the center of the nose block is cut out to receive the nose plug, details of which are given. The front of this plug is a disc of 1/32 plywood while the back is laminations of 1/8 sheet. Drill the tiny hole for the prop shaft and then cement washers to either aide to fix the line of thrust.

Tall surfaces constructed in the following manner are both light and strong; both rudder and stabilizer are made similarly. Working directly over the plans, make com-plete frames using light 1/16 sheet parts for outlines and 1/16 sq strips for spars and ribs. When dry, lift these flat frames from the plan and add very soft strips of 1/16 sq. stock to each side of each rib. To complete the construction, cut the ribs to a streamline shape.

It is required that the wing be of strong construction since the landing gear is attached to it. Ribs #1 and #3 are 1/16 sheet while the others are 1/32 stock. Sand them carefully to shape and cut the notches for spars. Spars and trailing edge pieces are cut from sheet and the leading edge is 1/8 sq. strips. Use pins to hold the various parts in place over the plans until the cement has set. Then join the halves with 1-1/4 dihedral at each tip, adding center rib #I at that time. Next, fix the landing gear spar in place and finally, finish the whole wing structure by cutting and sanding the edges to conform to the airfoil shape.

Landing gear struts are fashioned from .040 diameter music wire. The wire is bent in such a manner that it may be attached to the wood structure as shown by the sketch. Be sure to make a right and left strut and then using needle and thread, sew them right to the ribs and spars..." 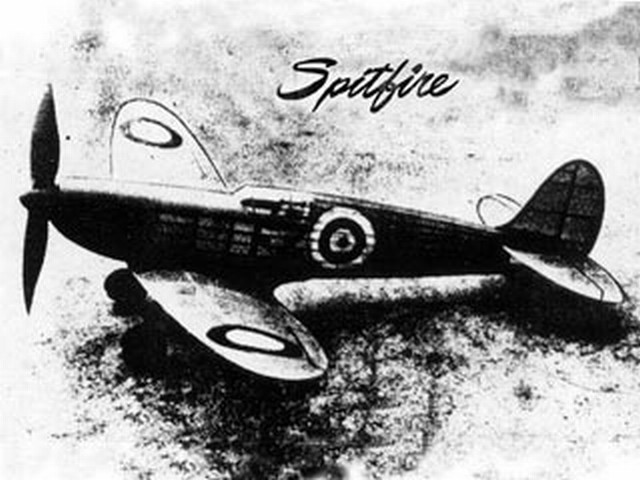