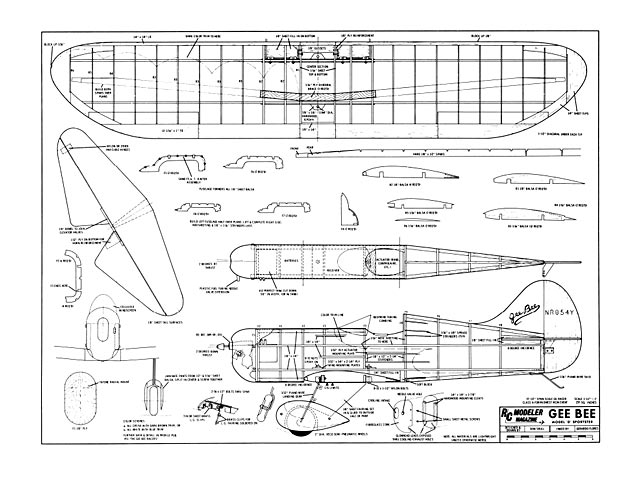 Quote: "This 1-1/2in to the foot 37-1/2in span single channel scale model of the famous Gee Bee Model D Sportster is a snappy machine on a TD .049 Designed for Galloping Ghost equipment.

For the past several years, I have been flying a couple of .049 powered sport-racing GG airplanes. As they become oil-soaked and ready for retirement, I began thinking about a replacement. It still had be a compact, racy ship - preferably one which would fit the Midwest/RCM Air Races Class A requirements. But I also wanted the new ship to look a little more like a real airplane than the previous balsa boxes. The Shoestring, Bonzo, and most of the other famous Goodyear racers had been much used recently, so I held out for something a little different. I found it in the Profile Publication #51, "The Gee Bee Racers," The Model D Sportster de-tailed there is a snappy machine and pro-vides the basis for a beautiful little single channel ship.

The prototype quickly jelled as a 1-1/2 in to the foot, 37-1/2 in wingspan model. ideally suited for the newer light weight GG systems like the RAND GG PAK, or miniature pulse equipment like the Airtrol RE-1 Digipulse. While the airplane probably could be flown on pulse rudder only, I would recommend rudder & elevator control systems, especially with the hotter engines. The airplane will fly nicely on a Cox Golden Bee or a Medallion .049; ii is a scorcher (and a lot more fun'?) with a Tee Dee .049 or .051.

First a few words about the real Model D Sportster. The Model D was designed in 1930 by Granville Brothers Aircraft Inc of Boston and intended as a relatively low cost and docile sporting machine. As fliers of that period were prone to do, however, they often made minor modifications to their Sportsters and used them for racing. These machines can be recognized by their 'Restricted' class registration number prefix NR instead of the usual NC designation. The standard Model D had a 25 foot span and sported a 110 hp American Cirrus engine which gave it a 145 mph top speed and 125 mph cruising soeed.

In the interest of improving single channel performance, a few minor deviations from scale were made in the model. These included a slight increase in dihedral and enlarged horizontal tail area. Aside from this, the prototype was pretty close to scale and modeled after a specific sportster shown in the Profile Publication. The color scheme chosen was cream and brown, trimmed in the traditional Gee Bee manner.

If you're ready, we'll fill you in on some of the building wrinkles which should simplify the construction phase. Although the model is pretty straight forward construction-wise it does employ a little more built-up structure than normally found in this size model. We also used nylon bolts to hold on the wings instead of those greasy ugly-bands. The results are more than worth the slight additional effort. If you insist, you can easily substitute the usual dowel and rubber band system. One further suggestion the performance of these little ships is affected seriously by their wing loading. For this reason, use the lightest wood you can lay your hands on for all components except as indicated on the plan. Try to keep the all up weight below 20 ounces. The proto-type weighed in at about 17 ounces. and with a Tee Dee .051 its performance was just less than spectacular.

Before starting construction, decide on what equipment and engine you will be using, and lay out the installation accord-ingly. Next, cut out all the parts.

WING Build the wing first, since it will be used in building the fuselage. Assemble both spars over the plan, including the plywood dihedral braces, and when dry drill the 3/32 in holes in the front spar for the landing gear mounting clips. Next build one half of the wing by pinning down the spars in position (the other ends will be sticking up off the work bench), the bottom trailing edge strip, and block up the leading edge..."

Alternate scan at 200 dpi, thanks to IanMurdock.
Article pages. 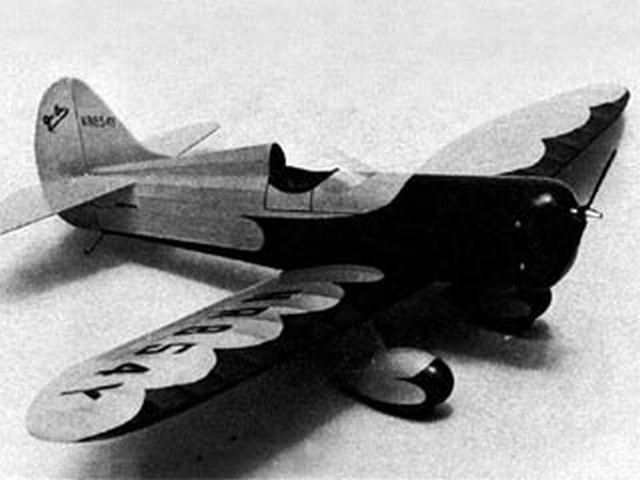