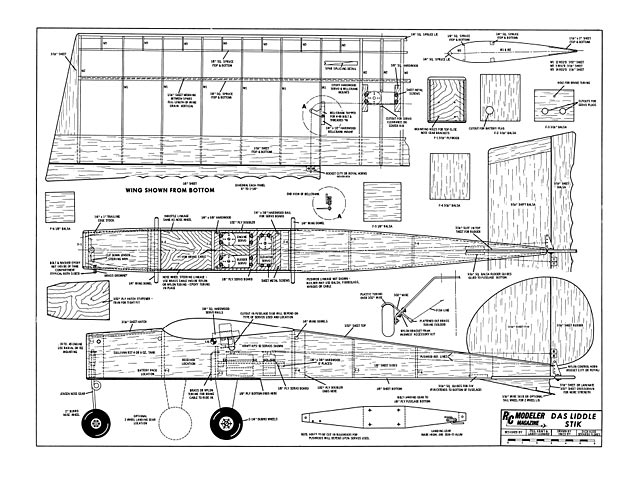 Quote: "ALMOST two years ago Phil Kraft threw caution to the winds, his french curve in the trash, sophistication to the side, and beauty of line someplace that hasn't even been discovered yet! The end result of his labors was the Ugly Stik (oz1253). As could be expected, after a quick (or is it kwik?) glance at this project of a proficient modeler, the Ugly Stik was an immediate success. Not only was it a fine flying machine, but it could be built very kwikly (naturally) and it is of the category often described as : it's so ugly that it's cute! Jim Jensen then produced one of his beautiful kits of this airplane and its success was assured.

Larry Leonard, proprietor of a local hobby shop and a very active flyer, and Bud Anders, (both of the Valley Flyers R/C Club) built and flew the Ugly Stik and both liked the airplane very much. Then the idea came to them that this ship might be even more fun if it were to be reduced in size. They then would have a more compact airplane, which would, hopefully, provide even more fun. These two intrepid modelers decided that a 25 percent reduction in size would provide a nice, small airplane with enough wing area remaining to keep it airborne.

Here serendipity entered into the picture. With much acumen, the plans were reduced to 3/4 size, the structure was modified to fit the reduced size of the airplane, and the elevator was slightly increased in area to provide the proper response. Now hear this, fellow modelers. When a wing is reduced to 3/4 of its original size, there remains only 9/16 of its original area. Ergo, the reference to serendipity. The airplane, never having been schooled in mathematics flew like a dream. It ignored its high wing loading and even retained the glide. True, more than 1/8 of an inch movement either way of the ailerons would produce angular accelerations of an unbelievable magnitude, but the sophisticated solution to this problem was finally derived, lengthen the aileron horns.

While cutting out the parts for the first Liddle Stik, Larry Leonard decided that it was almost as easy to cut out six models as it was to cut out one. As a result of this logic, the original sextet was built by Larry, Bob Golden, Dick Adams, Mike Bainum, Jim Boylan, and the Valley Flyers answer to Harold Goldklank - Les Kesner - all members of the Valley Flyers. The equipment utilized has ranged from six channel reeds to full house proportional, although there is no reason why this would not make a good GG ship. Considerable success has been recorded by each airplane insofar as qualifying as a real fun aircraft.

The Liddle Stik has been flown as a tail dragger, or trike geared; without dihedral; with ailerons, without ailerons; and even without a working receiver (need I say whose?). It has been powered by a variety of engines ranging from .19's to would you believe a Supertigre .56? It has been fitted with almost every type of radio equipment imaginable and most rigs will fit with a little planning. Larry's prototype sports a Supertigre .35 in the nose, four channels of a Kraft KP6B inside, and weighs about 3-1/2 pounds dry!

The airplane is a fast, smooth flier, and although it was designed primarily as a sport ship, it will do both full AMA and FAI patterns with no strain. I've also seen it put through virtually every free style maneuver there is and it does them all..." 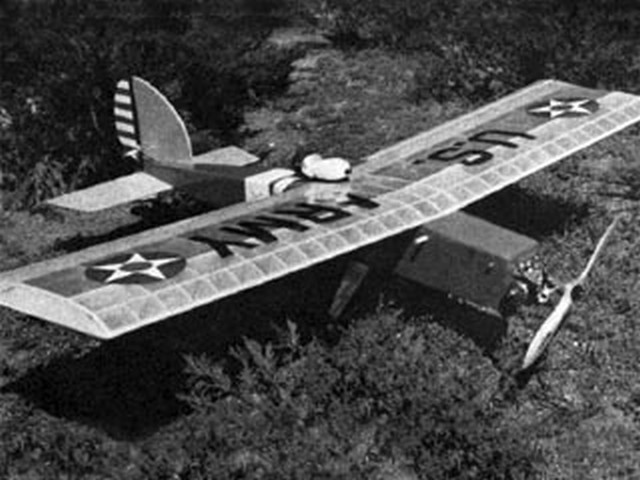 Hi Steve, I recently downloaded the Liddle Stick outerzone plan 4952 and printed out A4 pages reduced to 91% on my printer, then taped the tiled pages together, giving a span of 42" to best match an old OS 25 FSR motor I had lying around. The finished model flies fantastic and I have sent you a photo of the finished result [more pics 003]. Your site is an amazing resource, you are doing a fantastic job, really well done. Thanks, regards.
Paul Dumsday - 09/04/2016
Thanks for this site. Love looking at plans. Attached is a picture of the Liddle Stik, converted to electric [more pics 004].
DrBarryMcIntyre - 28/06/2016
Hi Steve, Here's another pic for your wonderful collection. This is my current Liddle Stick for e-power [more pics 005]. Some time ago we started using a sheeted D-tube wing. It seems some guys were running .40 size engines and the wings were folding. Not a problem with D-tube. Conventional undercarriage is lighter, too.
JimHales - 30/06/2016
Add a comment