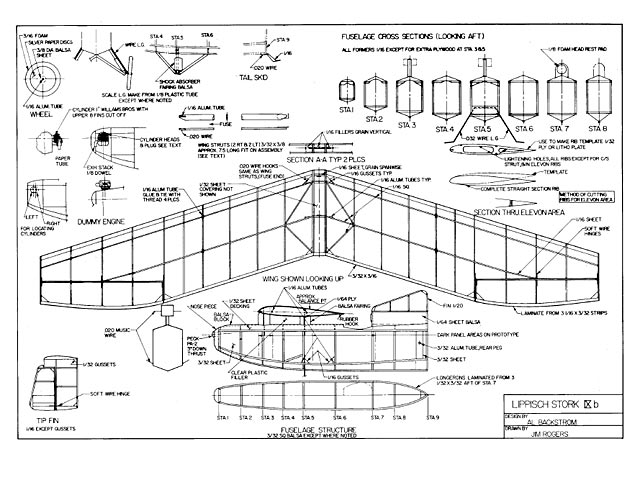 Quote: "Some of the more interesting airplanes in aviation history tend to be buried because they were one-time research vehicles. The Stork IXb is one of these. Even though I have looked very deeply into the history of tailless airplanes I did not know of it until Dr. Lippisch's book on the history of delta wing airplanes was published. This has been translated to English under the title of The Delta Wing, History and Development, and published by the Iowa State University Press. This is a non-technical book that has lots of photos and three views.

I was fortunate enough to know Dr. Lippisch slightly in the 50s. I have a favorite re-miniscence of him to share. On one of his visits to Texas he spoke one evening giving a technical lecture using a three dimensional smoke tunnel of his design to illustrate some flow patterns. The next evening he spoke to the Texas Soaring Association (our local soaring club) and told of spending the winter of 1922-23 (I think) on the Wasserkuppe with Espenlanaub, where they lived basically on bread fried with any fat they could scrounge. He concluded the talk by saying that by spring he had formulated the basic theories that resulted in the Delta wing. I have heard some of my older friends say that the major hazard in aviation in the twenties and thirties was starvation but I don't think any of them were that close.

The Convair XF-92 of the 1950s obviously did not emerge directly from the winter ordeal and the Stork IXb was one of the steps along the way. The Stork series were swept wing aircraft that were gliders or very low-powered airplanes. One of the interesting points of this series of aircraft is that the elevon hinge lines were perpendicular to the center line of the aircraft on all the later designs. This produced some pretty wing planforms.
The last of the series was the IX. The basic Stork IX was a glider, basically a primary type with completely exposed pilot under the wing. The second was the same design but with the pilot enclosed in a pod with only the head exposed. The Stork IXb we are modeling used the same wing design but had a fu-selage with a Bristol Cherub installed in the nose and the pilot seated aft of the wing in an open cockpit. The tip fins were also enlarged, no doubt because of the change in nose length. This airplane was later modified with-out change in designation to use a steel tube fuselage; other minor modifications are ap-parent in the photograph of it in Dr. Lippis-ch's book. A Stork Mc was proposed but never built.

My model came about as the result of a desire to build a Coconut scale (indoor jumbo) model that was not run of the mill. This event has been promoted by the DC Maxecuters and I have found flying a large model indoors to be fascinating. Fortunately my friend Bill Hannan had built a CO2 model of the airplane and had corrected errors in the three view drawing. Now this was a flight test airplane and as such it apparently received few if any of the finishing touches. I do not mean to imply that it was sloppily built but only it never was put into the spit and polish condition some operational airplanes achieve. The airplane is apparently 'self colored' with natural metal cowling, wooden fuselage with some dark and some light plywood panels, and clear finished fabric on the wing and tip fins. Other items are just as they were installed with no finish added. The airplane layout has some interesting features for a rubber model and one of the things of primary interest is that even though the fuselage is not long, a rubber mo-tor will be centered almost on the CG. Also, the blunt aft lines on the fuselage allow the rubber to extend almost to the tail post. The model uses Jim Marske's 23112-75 airfoil. This airfoil has the aft 50% flat on top. This is the airfoil Jim used on his Pioneer 1 tailless sailplane.

Construction of the model is fairly straight forward for those familiar with stick and tissue methods so the discussion will present mostly the information on areas that are not readily apparent from the drawings. It is not necessary to build the model so that it can be disassembled but the damage resistance that it provides makes the work worthwhile. All the balsa used should be light grade except the wing leading edge which is hard, and the fuselage longerons plus the edging strips for the tip fins which are medium. The fuselage is built using a standard box from the nose back to Station 7..." 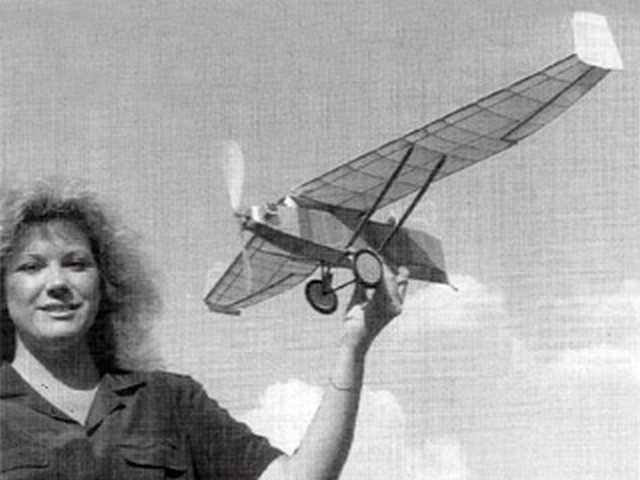 Is this model designer the same Backstrom that designed a full size flying wing glider?
Marty - 02/09/2013
Apologies everyone for not actually adding the article! I'm such a klutz sometimes. Thank you to everyone who pointed it out. Added it now :)
Mary - 08/12/2017
Marty, it seems almost certain that the author of this article is the same Backstrom. For instance, we know the Backstrom who designed the full scale flying plank was also in the Texas Soaring Association. Then there's the hobnobbing with Lippisch and so on. Al Backstrom did some model designs, including one of his EPB-1. If you read the article for that EPB-1 model, it's pretty clear that he's the one that built the full scale version as well: http://www.b2streamlines.com/Backstrom/BackstromWPB-1/wbp-1p1.jpg. Walt Mooney was an aeronautical engineer also. Somehow, I have an impression that they worked at Convair at the same time, but I might be completely wrong on this.
LincolnR - 23/12/2017
Plan is 9" span size. major enlagement required to print it at intended 36" span. with some image quality losses.
fred - 19/05/2019
Thanks, have fixed this now.
SteveWMD - 19/05/2019
Add a comment