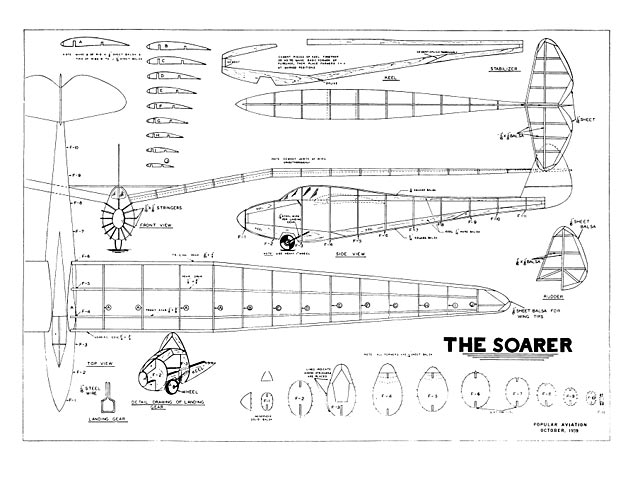 Quote: "THIS month we have departed from our regular line of gas models and present a soaring model which will give you many interesting flights. The accompanying photos of the model will give you an idea of its trim and graceful appearance. The model measures 61 inches from wing-tip to wing-tip, with an overall length of 23 inches. The color scheme is canary yellow trimmed in light green. Details are in black. Plans may be enlarged to any size that you may desire by using an ordinary pair of dividers.

Construction of Fuselage: The builder has an option of two types of fuselage. Either fuselage built up with stringers and tissue covered, or a fuselage covered with thin 1/32-inch sheet balsa. The latter is a good deal more efficient, as skin friction is far less than that common to the paper-covered type.

In constructing the fuselage, build the keel or backbone of the fuselage upon a flat surface. After this has become thor-oughly dry, the formers which are cut from 1/16-inch sheet balsa wood are cemented in their respective positions. The nose piece is carved from solid balsa wood and sheet balsa wood is covered between nose piece and former No.2. Stringers are made from 1/32-inch by 1/16-inch balsa and spaced evenly around entire fuselage. Sight from front to rear when cementing in position to make sure that they follow the streamlined shape of the fuselage. Thin balsa veneer is used from head rest of cockpit and is faired into fuselage. The landing wheel is clear-ly explained on the plan. Make the open-ing in keel large enough so wheel may absorb shock. The tail pieces, elevator and rudder are built upon a flat surface. They are of the flat section, so no trouble should be had in building them.

Building the Wings: Construction of the wings is a little more difficult than the average model, as the aspect ratio is so high. We might suggest that you secure extremely hard wood for the spars, leading and trailing edges. Ribs are cut from 1/16-inch sheet balsa. The wings show no reinforcement compression struts between the ribs but these may be added if you wish; they are made from 1/16-inch square balsa. To obtain the 'gull' in the wing, we suggest that you build each panel in two separate sections and cement them together afterwards. Do not join the wings to the fuselage until they have been completely covered and doped.

Covering the Model: The entire model is covered with ordinary Japanese tissue. A light grade of model airplane dope is used in holding the tissue to the framework. In covering the body, long narrow strips are used, covering two stringer spaces at a time. Do not try to cover fuselage in too wide a piece as it will result in a series of wrinkles. When all parts have been covered, spray with a light coat of water in order to make the covering stretch.

Elevator and rudder can be pinned upon a flat surface so they will not warp. Care should be exercised with your wing panel. Use blocks, so that they might be held in position until thoroughly dry. Two or three coats of clear model airplane dope will protect the tautness. Color coat may be applied after model has been completely assembled.

Testing and Flying Your Model: It will be necessary to add a small amount of weight to the nose of this model in order to balance it. Hold the model directly under the wing while launching. The model, when launched by hand, should glide very gently to the earth. Many soaring models have been lost by encountering uplifting air currents (known as thermals). A launching hook may be attached to the nose so that model may be flown high into the sky with tow string and released after the proper altitude has been gained."

Note this plan was previously misattributed to Paul Plecan. 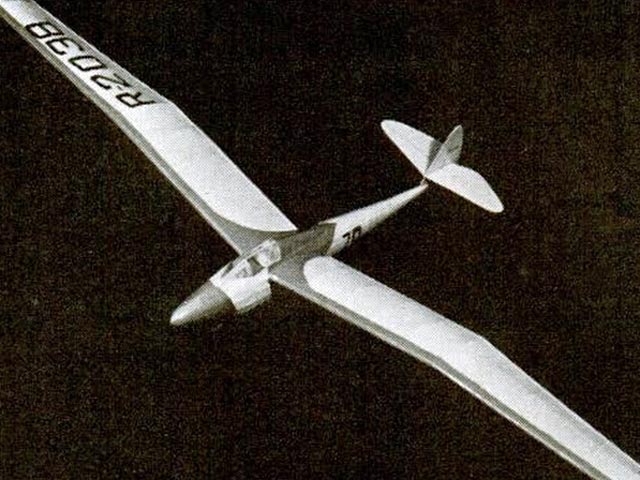