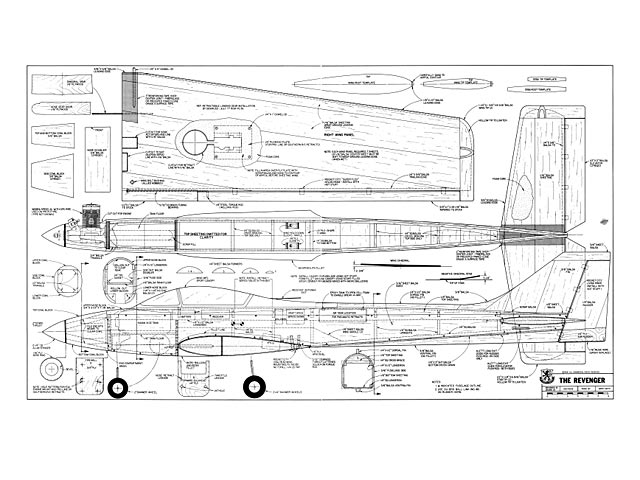 Quote: "Revenger is the newest and sleekest design to be offered to the modeler in years. One of the unique features of the Revenger is its laminar airfoil wing. The laminar airfoil provides the modeler with a wing that few model designers attempt to use. Literally years of testing and development has resulted in a design that will take a back seat to none.

As with any scratch-built airplane, one of the biggest tasks is preparing the parts for assembly. I have found that two sets of plans (one for templates and one for building) will save hours of work in the long run. I would suggest making templates from chrome-cote card stock which can be found at most of the large stationary supply stores.

Cut the parts from the drawing slightly oversize and spray with 3-M-77 adhesive spray and bond to card stock. When dry (just a few minutes), trim to final cut size. A parts list has been provided as an aid in preparing your parts for assembly. I have broken down the assembly into major components, ie fuselage, wing, empennage, etc. This will enable you to jump around during build up. Throughout build up, the writer will assume you are using templates.

Fuselage. Cut two matching sides from 3/16 x 4 x 48 in medium hard balsa, using the fuselage template as a guide. Be sure to cut the front edge (firewall) for 2 degrees down thrust. Measure back (from firewall end) 3/8 in and draw a line parallel to edge, cut two top stringers 1/4 x 1/2 in and glue to top of fuselage sides(s) using Wilhold Aliphatic Glue..." 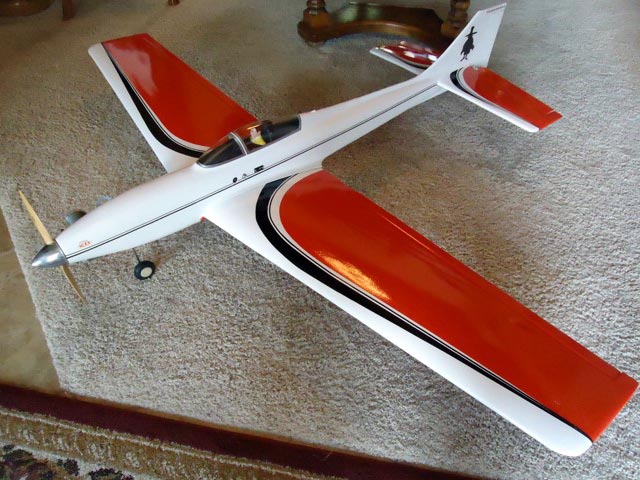 As the designer of the Revenger I wish to have you make a change to the plans. There was a CG change that did not get incorporated before the plans became available. Please make the correction before you [release] any more plans. The aft CG should be deleted. A new forward CG symbol should placed forward of the existing forward CG on the same line as the Number 2 bulkhead. The original forward CG now becomes the aft CG... Dick Russ, Designer of the Revenger.
DickRuss - 13/07/2018
Thanks. This is done now.
SteveWMD - 13/07/2018
Just thought I would share the latest Revenger I finished [main pic, 003]. I have been flying the original for 42 years and still flying great but I felt it was time to retire it and build a new replacement. I did move the canopy back a little to make it more sheek. It does fly fantastic. I did set the CG at 5-¾ aft of forward bulkhead. I also changed the paint design to be a little more modern.
Dick Russ - 10/12/2020
Add a comment