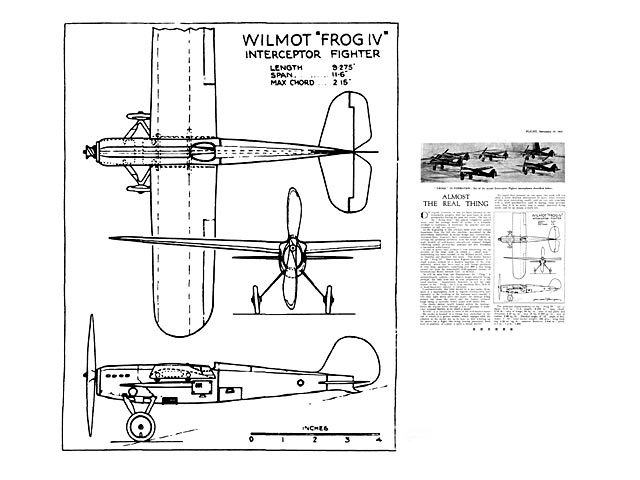 Quote: "As will be seen from our illustrations, the 'Frog' is extraordinarily realistic - the slightly larger aircrew being, perhaps, the only item not in true proportion to a full-size machine. Appearance however is not the only feature of the Frog for it is an excellent flyer, ROG or hand-launched, indoors or outdoors. Constructionally, this little model (it is just under 12in span) is a masterpiece, both as regards workmanship and ingenuity in the working of the material used - mainly a very thin light metal alloy and paper, the fuselage being pressed out from the metal and the double surfaced wings being of specially doped paper with metal ribs. The elastic motor, neatly housed within the fuselage, drives the tractor airscrew through a 3.4:1 gearing - a somewhat unusual feature in so small a model. As sold, the model is housed in a string box, embodied in the end of which is a geared winder, which engages with the airscrew as the model lies in its box so that winding up the motor..."

Quote: "This is the FROG Interceptor Mk IV, supplied as a ready to fly model complete with a winder for the rubber motor built into the box it came in. There were several marks of this famous model, starting in the 1930's and continuing after the war. The fuselage was thin aluminium and the wings folded card with spars. Several scaled up versions of this classic design have been produced for radio and electric power in the last few years, one notable one by Chris Golds. It makes a very good electric R/C model."

Note this is not a detailed plan showing parts and formers, this is just a general layout drawing. The model was sold RTF so there never was a plan. I am including this (not very detailed) drawing in the Outerzone listing because the Interceptor was such an iconic design, and in the hope that other more detailed drawings may surface. 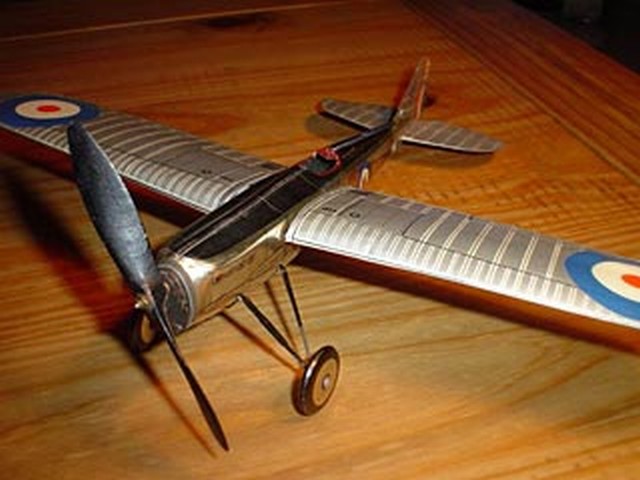 Hi friends, I found your site while seeking info on my late father's rubber powered model airplane. I decided to send you some pics [morepics 5-7] because I find it unusual that Frog would adapt production to export countries and then apply the local air force markings. Owing to the code number and my father's age I believe the airplane dates to 1929. The puppet pilot figure does not belong to the plane. I expect it may serve as information. Best Regards
Eddy, Argentina - 24/09/2021
Hi here, friends! Thanks for adding the pics! Wealth of information in your Web, keep the good work up! Best regards!
Eddy - 24/09/2021
Add a comment