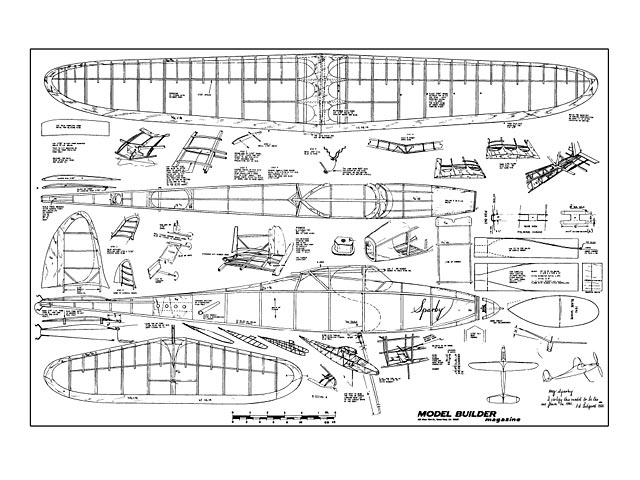 Quote: "Old timer fans who are into rubber power will really enjoy this presentation, as newcomers who want to learn some of the tricks of the trade. Several contest events are already planned around this model.

Would you believe that the Sparky kit has been on your hobby shop's shelves since 1940? The box looks better now, but the contents are virtually the same as originally produced by Comet Model Hobbycraft Corporation, Chicago, IL 60609. It could be the longest continuously produced free flight kit.

Let me tell you how Sparky came into being. It took a bit of talking at Comet but with Carl Goldberg's help, management gave me the go ahead. Most kits suffer some constraints the manufacturer imposes and Sparky had them too. Most of them involved the use of a sawed balsa propeller. If anyone ever develops a way to make a good prop out of one of these devices, I'd like to hear about it. But remember that was 41 years ago, and that is all there was. Most modelers can not carve a propeller from a block, even today. So these props were the best available.

Not too long after Sparky went into production, I found myself in the Air Force going to mechanic's school with old friend, Clarence Mather. In Texas as an instructor, I had time to build models and fly on the weekends with a nice bunch of modelers in Wichita Falls. My CO had some ideas about tidy rooms. In pleasant defiance, I made two wood boxes that fit under my raincoat and overcoat. One held models and one held supplies. Now, how do you put two or three models in a box 26 inches long, 17 inches wide and 5 inches deep? Simple! Everything comes apart.

A few changes have been made to the kit in these four decades. For the benefit of modelers who enter Sparky in Old Timer contests. these changes need to be clarified to prevent any disputes. First, the sub-rudder was removed at some unknown date. The model looks better with the sub-rudder, and the drawing of the sub-rudder is included in this article. It would be reasonable for contest directors to accept either, since both have been produced and then built in good faith.

Originally, a machine-cut balsa propeller was included in the kit. Today a 9-1/2 inch diameter, 9-1/2 inch pitch plastic propeller is supplied. This is the same propeller required for P-30 competition free flight models. They are really nice props. Some are not balanced, but it's easy to detect the wee lump on a blade and to scrape it off to make the blades balance.

Unfortunately current kits have this fine propeller that has a .050 hole in it and the propeller shaft is made from .062 wire. Also unforunate is Comet's lack of concern to change to the proper size wire. So off to your hobby shop for .045 or .047 musicwire and bend your own.

The partial paper spinner shown in the kit just won't work, so use a block of balsa. This fine magazine will have a detailed article by this author in a later issue that shows how to make a spinner. Some wood supplied may be too soft for a sturdy nose block, so replace with your own, or add two layers of 3/32 balsa to the front of the one shown in the kit. See the sketch for details... "