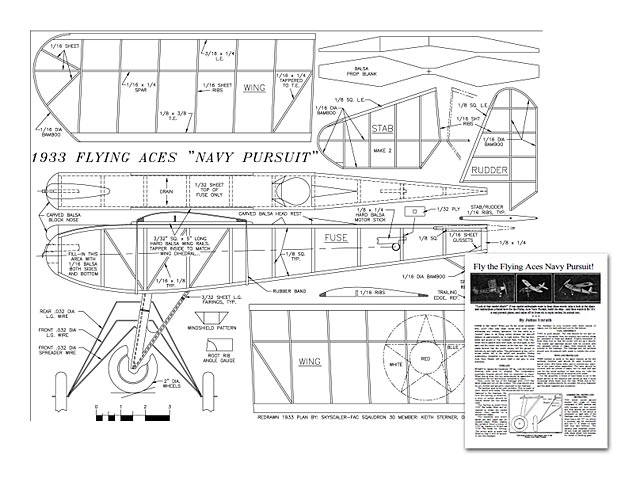 LOOK at that climb! When you fly the model presented here, you'll often hear those words from both model enthusiasts and ordinary spectators. For this really is a 'pursuit' plane in its flying ability because the take-off distance is approximately six to eight inches. This has been tested and proved at Van Cortlandt Park, New York City, where twelve parallel lines were made, one inch apart, in fine sand, and the model was started on the first line. The wheel marks showed that the model always left the ground in between six and eight inches. This performance is due, not to excess rubber, but to the airfoil and propeller. During construction, remember to use extreme care and the Flying Aces Navy Pursuit will prove itself a real gem in your collection.

Fuselage. Start by placing the longerons 1/8 in sq over the full-size drawing with pins or weights. The compression members (braces) should then be cemented in place. When this is done, the two sides should be assembled by cementing the top and bottom members in place.

Next, cover the top of the fuselage with 1/32" flat sheet balsa and cut out the cockpit. The nose should now be cut. drilled and securely cemented to the fuselage.

The landing gear is the next problem. This is made of wire, faired with balsa. The struts should be bent and fastened to the fuselage. Before the fairing is attached, a drop of solder should be placed where the two struts meet. The fairing is made from 1/16 flat balsa, fitted and cemented to obtain the correct shape, then sanded to a streamline shape..."

Quote: "Here's a plan for a rubber sport model that came from the January, 1934 issue of Air Trails. It was in the Jul/Aug 2013 Max Fax, edited by Stew Meyers, which just arrived today. If you go the Maxecutors web site, there is a full size, redrawn plan by Keith Sterner which you can download: http://dcmaxecuter.org/plans.shtml
There was a feature on this model by Alex Imrie in the February 1990 issue of Aeromodeller, which is reprinted in this Max Fax issue as well. The plan and article from AT which appear here were sent to Mr. Meyers by Vance Gilbert. The color photograph which appears here comes from the Maxecutors web site." 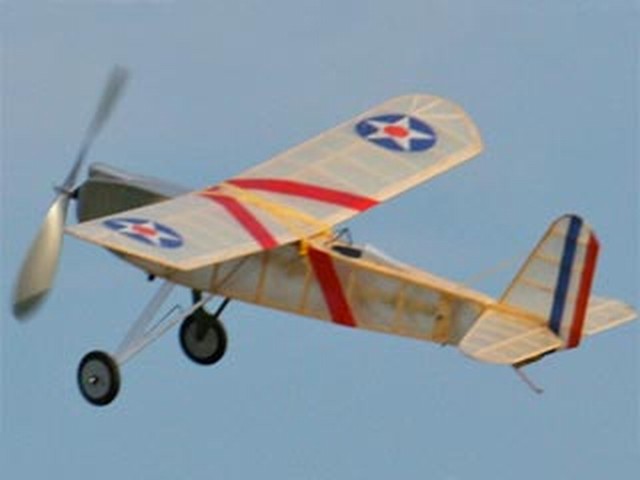 Hi Steve, Here's a few photos of the Flying Aces Navy Pursuit I just completed [more pics 003-006]. Very nice clean plan. I used 1/16" wood dowel in place of the bamboo for wing tips and added wing hold down pins for rubber band attachment. I also used aluminum tube as the rear rubber motor mount to allow for attachment to winding stooge. All in all a great plan. I liked the color scheme so I pretty much just copied it. Not sure what I'd be doing in retirement were it not for Outerzone ......Thanks a million!
PaulS - 22/09/2016
Add a comment