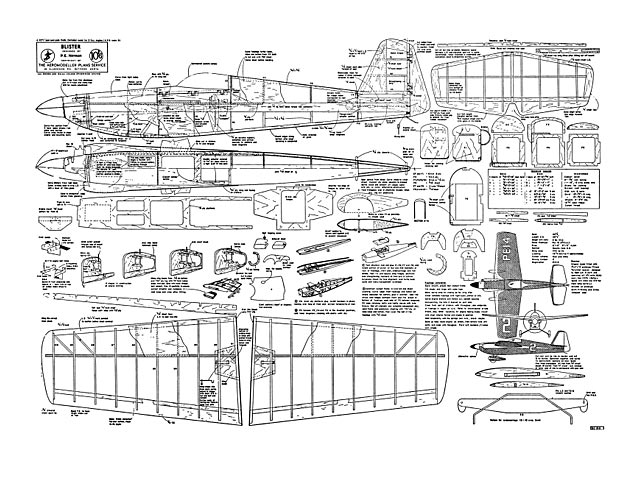 THIS MODEL is the result of producing a radio controlled single channel machine based on characteristics of some of the American Goodyear Racers, but is not necessarily a scale model of any one machine.

It is an attempt to make an aircraft which would be suitable for pylon racing, but stilt have the essential characteristic of immense strength, fairly straightforward construction, pleasing appearance and not too violent flying qualities.

It departs a little from normal construction practices, in so much that the forward portion of the fuselage is built on a plywood platform, which in turn serves to carry (if needed) the fuel tank, the batteries (DEACS), the radio receiver, the wing tongues, and possibly the actuator, this unit at the same time prevents the fuselage 'bursting' in the event of a heavy crash.

Wings are made in two halves and fit onto the tongues and are held in flight position by spring clips or sheer pins; the tail and fin/rudder unit in one piece is easily knock-affable and adjustable, and the prototype sports a 2 in diameter needle nose spinner and streamlined wheel spats.

The battery radio unit and actuator are easily accessable by lifting the hinged cockpit canopy and the model is emminently suitable for some or the small lightweight receivers corning onto the market. It is nylon covered and should not be too great a problem for a fairly experienced modeller to tackle, arthough practice and previous operation or a radio model are a must.

The prototype is powered by a Fox 15 glow motor and the whole of the motor unit and mount is detachable and held in position on the front of the fuselage by spring loaded bolts, this mounting being adjustable by means of slight packing which may be built in when the earlier flying tests have been completed.

The model is fast and has a tendency to neutral stability and is sensitive to the rudder control. The original is finished in red with white trim racing numbers lettering etc and has white under-surfaces to wings and tail (for easy direction visibility when flying) with natural black plastic spinner and presents a very attractive sight while performing in the air.

Quote: "42in span single channel R/C sport model from Aeromodeller March 1962. Plan is enlarged from the 1/7 scale repro in the mag, so it's not the clearest of plans." 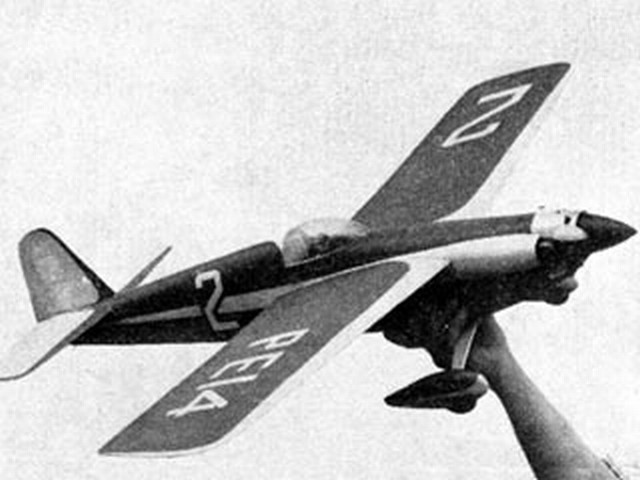