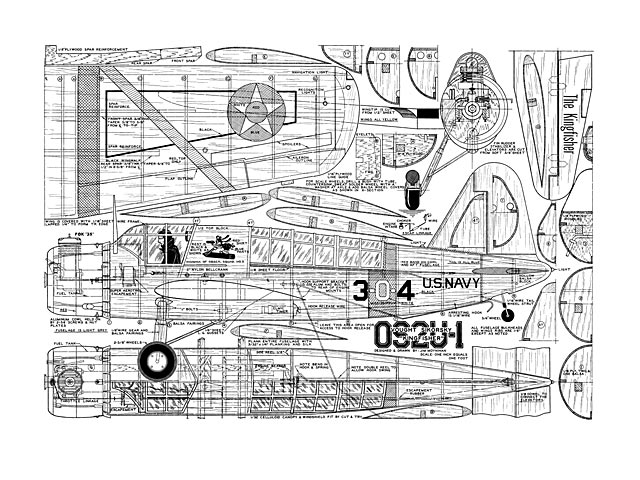 Quote: "Build scale? Fly for sport? Carrier event? This man's size model of one of the most colorful planes of World War 11 flies as well as it looks. For .29 to .35 engines. The Kingfisher, by Jim Moynihan.

Much like Dumbo, the Catalina flying boat, the Vought OS2U-1, was designed for one thing and wound up its service career having done nearly everything. Many are the Navy veterans who lived to go on fighting because they were 'Kingfished' out of the briny by this airplane. Unsung, it hit the front pages with rescue of Eddie Rickenbacker from the Pacific wastes. But the topper was the time a Kingfisher landed in Truk harbor, Japan's Gibraltar, in the middle of a big raid and loaded seven downed Navy pilots on wings and floats, taxied 16 miles through the ocean's open water to deposit them safely with the submarine Tang, then flew back into action.

Small, rugged and versatile, the Vought OS2U-1 was among the first airplanes to use welding extensively in its structure. Note too the use of spoilers for lateral control at low speeds when the ailerons dropped with the flaps on landing runs. Powered by a 450 hp Pratt and Whitney radial, it was no ball of fire, but in 1941 it was an airplane when we needed airplanes. Originally brought out in 1939 as a gunnery spot-ting and observation plane for catapult fleet duty, it stayed in service until 1944, and in some cases later, finally bowing to progress in the form of the helicopter.

The drawings are scaled directly from Vaught Sikorsky Co prints: one inch to one foot scale. The markings shown are authentic, pre-war and colorful. This ship represents the machine flown by the leader of Section One, Airplane Four, Observation Squadron Three (V0-3), aboard the 33,000 ton New Mexico Class battleship, the Mississippi. When shore based, the wheel gear shown replaced the usual single large float and the two wing tip floats.

Getting down to the business of building, it would be best to read the details carefully since this ship was designed to be built with the engine mounts, gear, wing spar and hook all in one beefed up unit, and while construction is not difficult, the wrong sequence of con-struction can make it awkward. With the demands of the carrier event placing a premium on ruggedness, low speed control and short field take-off, we think this ship will please the most critical fan.

Build the wing first. It is conventional in construction, using two spars of hard balsa helped our by plywood short spar gussets as indicated on the drawings. The spars and plywood spar stiffeners extend right through and key in between the engine mounts later. Plank the wing with 1/16 sheet..." 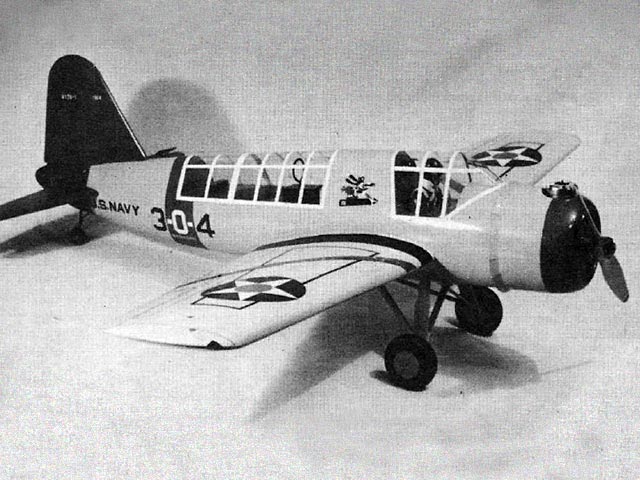