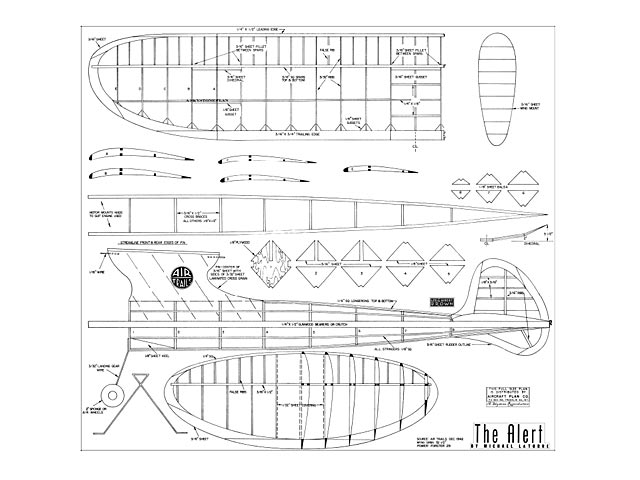 Quote: "THE original ship from which the Alert was developed was a bit smaller than the final model. Powered by a Bantam and having a wingspread of 42 inches it performed remarkably well. Following several test flights it was lost on a ten-second motor run with low power, disappearing after a twelve-minute flight. Later, when the author had acquired a Forster 29. the larger ship was built.

Luckily we had retained our original building sketches and from these the larger ship was designed. Due partially to the greater efficiency of a larger wing (with better airfoil characteristcs) the Alert is now presented in the improved version, and we can assure all who build it a real championship performance. An unusual feature of the ship is the fact that among the builders it is known as a 'prop-saver.' In nearly 150 flights with both planes not a single prop has been broken.

For strength and rigidity, the fuselage is built around a 'crutch.' This piece of 1/4' x 1/2 in medium balsa is the basis of firm construction and must be true to keep the finished ship in good trim. You will note that the crutch, at the front, is spliced to the gumwood motor bearers. This step should be taken first, and when the joints are thoroughly dry, form the crutch. This is done by building it as it would look if you were a top of it, looking down. The crutch may be pinned to the table top while cross braces are cemented in place. Allow this assembly to dry thoroughly. After this step, and without removing the crutch from the plan, the top formers (marked T) may be cemented in place. It is advisable to line these up well before allowing the cement to harden... " 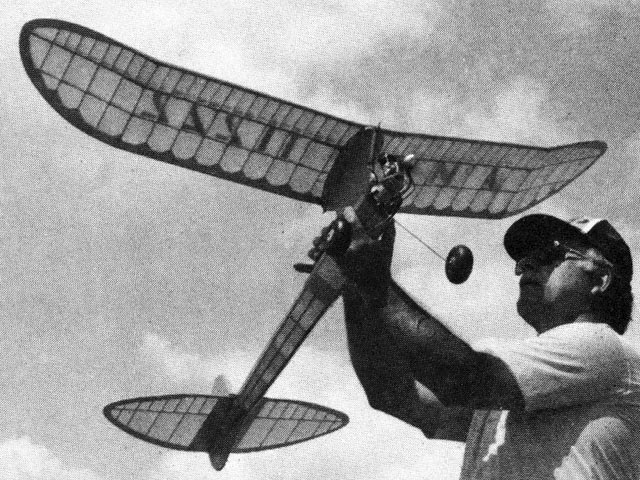