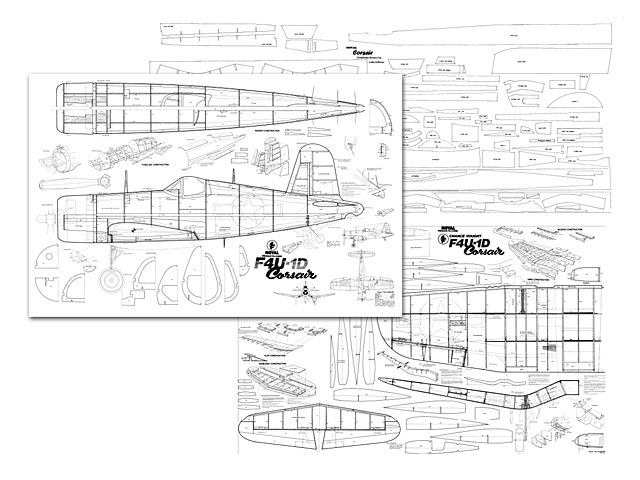 Construction of the corsair is not difficult but the model is complicated and will require attention to detail and alignment. Due to the complex curves involved, much of the model must be built free-hand. One's task is made much easier through the use of several of the new adhesives available. Zap and Hot Stuff hold balsa parts and set very quickly (we recommend a small fillet of aliphatic resin glue over the cyanoacrylate joints), 5-minute epoxy may be used sparingly on ply parts. Keep in mind that epoxy is heavy, so a light coat is highly advisable. Contact cement may be used to speed the attachment of the wing skins.

Separate the kit parts into the primary assembly groups - fuselage, wing, stab, and fin. Trial fit the parts while studying the plans and construction views. Note those pieces that can be pinned flat during construction and those which must be built free-hand. Be sure to spend several evenings familiarizing yourself with construction.

Draw centerlines on the wing, fin,and stab ribs to facilitate alignment during construction.

WHAT KIND of airplane does a retired Air Force fighter pilot build? Why a Navy Corsair, of course! l chose the Royal Products Corsair for many reasons. l've always been in love with the Corsair, and for some reason I think it has much more charm than the Mustang. And l've always wanted to be able to scale-land a Navy fighter.

Another big reason why l chose the Corsair was its size. The plans suggest using a 60- to 80-size engine for this model that has a wingspan of 61-1/2 inches, which is not a small airplane. Because the field elevation is 7,200 feet here in Colorado, I decided to go up a notch in power and install an OS Max 90 from World Engines. As it turned out, this was a wise decision.

THE KIT: As with all Royal kits, you will be impressed when you open the box. The kit comes with all of the parts in plastic bags, outstanding die-cutting, a full set of decals for two different versions, a radial engine, a cockpit kit, documentation, and full-size plans and building instructions. The complete kit is outstanding. l decided to go whole hog, so l contacted Rhom and ordered a set of their 90° rotation units with 3/16 inch wire. The plans show the retract installation complete with gear doors, and the Rhom units slipped right in.

CONSTRUCTION: l started the construction with the wing. l glued up the die-cut plywood spars first and pinned them over the plans. l added all the center section ribs, then the right and left outer panels. lt’s not a difficult wing to build and, using Hot Stuff, I put mine together quite fast.

l followed the plan modifications for the retracts. The only changes l made to the wing were the hinging of the flaps and ailerons. I used 1/8-inch plywood for hinge bearings, two for each surface, with 1/16 wire running the length of the aileron. This allowed the ailerons to be hinged in a scale manner. I hinged the flaps on the bottom surface of the wing using brass tubing and 1/32-inch wire. The flaps are in three sections, with one master and two slave sections per side. The method of hooking them up shown on the plans works great. I added some round balsa to the leading edge of the flaps so that when they are down the plane looks scale-like. I added the retract units, and then installed the bird cages that open and close the doors. This takes some fitting, but they work as slick as if they had been greased. The front doors were also hinged and they ride up and down on the struts.

I did the tail feathers as indicated on the plans, except for the hinging, which I did the same way as on the ailerons.

The fuselage was next. Only one modification was necessary - making the engine mounts wider to accept the OS 90. I used a Sullivan 16-ounce slant front tank. Prior to sheeting the fuselage completely, I installed the Futaba FP-7FG radio with FP-S128 servos and hooked up all of the pushrods. The air tank for the retracts and the rest of the goodies all went in the fuselage. The retract tail gear is actuated with Sonic Systems air cylinder. With all of the radio gear installed, I mated the wing to the fuselage and added the cowl.

Finishing is always the most timeconsuming part of building. I covered the complete airplane with K&B light fiberglass cloth and brushing epoxy, followed with two coats of sprayed automobile lacquer primer, sanding after each coat. In between coats I filled in any dings and dents with Model Magic filler.

Next I added the cockpit interior that's included in the kit. I didn't follow the instructions to paint the sides and floor blue, but used zinc chromate instead. This makes the cockpit more realistic. A Jet Hangar pilot was painted and glued in place. I fitted the canopy and glued it on.

I applied 1/64-inch Chartpak tape, then I sprayed two coats of Chevron aluminum over the whole airplane. I sprayed the bottom of the bird with Chevron fiat Intermediate Blue and the top with flat Sea Blue. I used the 12-ounce spray cans and one of each was enough.

I applied the decals next. Royal goes overboard with the decal sets. They provide two versions, plus color schemes for some civilian types. There are also a lot of stencil markings you can add. A printed sheet gives the proper location for them. I chose to do Pappy Boyington's airplane and the decal sheet was correct to scale.

To do the weathering I used 280-grit sandpaper in the direction of airflow where I wanted the aluminum to show. If you check the pictures of Corsairs you can see how beat up they get from being out at sea. I went right over the decals also with the sandpaper. This proved to be very effective and gives the finish a wellworn look. When I finished, I sprayed dead flat clear over the complete ship. I used a pencil eraser to slightly steak the canopy. Then I painted and installed the scale radial engine. I also added a drop tank that I obtained from Royal as a finishing touch.

After re-installing the radio, I checked the CG with the gear retracted and had to add 1/2 pound to the nose, even with the OS Max 90. All-up weight came to an even 10 pounds, which is not bad for a ship this size.

FLYING: Flying the Corsair is fun. It handles like a typical scale bird, but with the 90 up front there's plenty of power, in fact more than enough. Flaps slow it down on final, and landings are as soft as a feather. It rolls and loops, but don’t fly it too slow and then yank and bank, it could bite you.

All in all I was very satisfied with the Royal Corsair Senior kit, the Futaba radio, and all of the other items mentioned. l heard a rumor that Royal is coming out with a 1/5-scale Corsair kit in the near future and I can’t wait!"

Quote: "I have an addendum file that may be of some use. It's a more descriptive parts plan. Specifically, material size is called out on each piece(s). The plan available now does not have this. As I'm currently building this plane, I can say with confidence that it will help someone someday.

Quote: "I failed to mention that I'm an utter novice when it comes to balsa plane fabrication. This is an attempt at giving back to the community that has helped me every step of the way with enthusiasm and kindness. I thank you for the opportunity.
I'm a millwright/fabricator by trade so building things is nothing new. Nothing ever this small and it seems like I'm often like a bull in a China shop and need a more deft touch. I'm a work in progress atm. But, I digress, the included tail wheel plans are very accurate, just not from the original Royal plans. It's a from scratch item that some may find doable. I just built my first unit and it turned out much better than I expected. The other three drawings were drawn and given to me by Keith Bartley, whom I met on RCU forums. I converted them and had them printed. They are spot on and what seems to be better drawings than what I got off of this site. I could be wrong but I can specifically attest to the accuracy pertaining to the tail feather members. I was extremely pleased with the results.
Thanks for your time and I hope you and yours remain safe, happy and healthy. Warm regards," 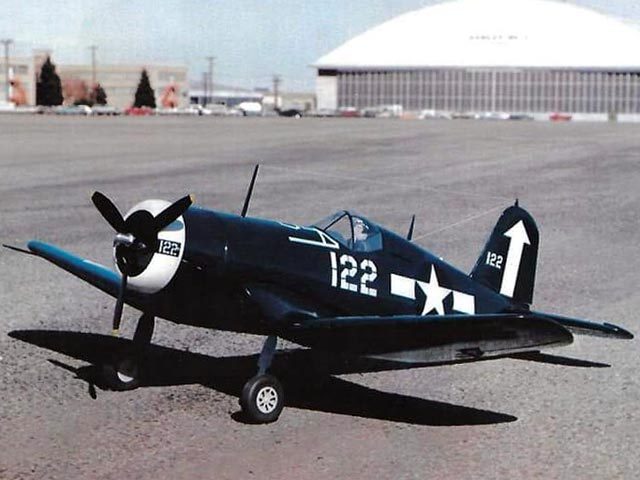 Fiberglass cowl for this Royal kit plan, F4U-1D Corsair, is available from www.fiberglassspecialtiesinc.com Part number # RL - 2.
RobertBrown - 10/10/2013
I can attest as to fiberglassspecialties.com selling them. It was $53 USD w/shipping. I just got one for my scratch build. Great quality and lightweight. It fits the former well but no cowl flaps, straight glass. Which is ok for me. I would buy again.
Chris Skaggs - 06/10/2020
Hi there, I found a old Corsair kit on ebay [pics 011-016]. 17 cc gas engine.
Larry Welle - 26/05/2021
Add a comment